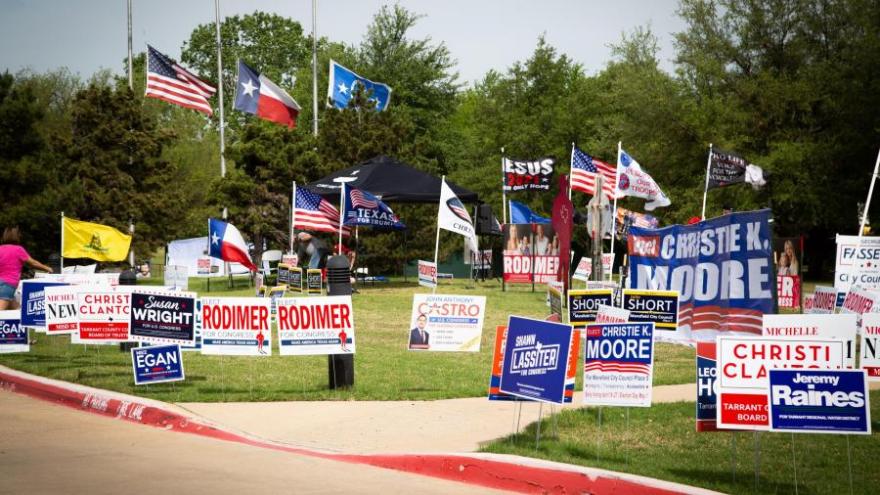 Texas' sixth district congressional race has become a window into the fight over the future of the Republican Party.

(CNN) -- Some Republicans in a crowded field of candidates competing for a US House seat in Texas ahead of a May 1 special election have embraced Donald Trump and his political legacy. A former professional wrestler is using the tagline "make America Texas again" as he warns "commies in DC are ruining America." Two former Trump administration officials are highlighting ties to the former President and the widow of a former congressman has secured a coveted Trump endorsement in the race.

Then there's Michael Wood, an outspoken anti-Trump Republican running with a message that puts him far outside the mainstream of his own party. Wood wants Republicans to reject Trump and stop perpetuating conspiracy theories like the Big Lie that the 2020 election was stolen and QAnon, which is frequently described as a virtual cult.

The sixth district congressional race has become a window into the fight over the future of the Republican Party and its deep internal divisions in the aftermath of the deadly January 6 Capitol attack and Trump's attempt to overturn the results of the election. It's a fight on track to define what the party stands for in the years to come, including what extreme and dangerous ideas it's willing to embrace and at what cost.

Wood has the backing of the most vocal Republican Trump critic in Congress, GOP Rep. Adam Kinzinger who met with Wood here in Texas on Monday.

The special election will serve as a test case for how much traction an anti-Trump, anti-conspiracy theory message can get in a red district. But the fact that only one Republican candidate is denouncing Trump and conspiracy theories underscores how firm a hold the former President still has on his party.

"I'm afraid for the future of the country," Wood said in an interview with CNN. The Marine combat veteran describes himself as a conservative Republican who reluctantly voted for Trump in 2020, but became convinced he was unfit to lead the party after his lies about the election provoked the Capitol attack.

"I felt like I had to stand up. Somebody needed to stand up and say, this isn't what the Republican party should be, and we've got to go in a different direction," he said.

The anti-Trump candidate believes he will be vindicated, if not now then at some point in the future.

"I think the party is going to get to where I am eventually," Wood said. "I want that to happen without having to lose and lose and lose. Political parties sometimes only get the message they need to try something different after a string of losses. I think we should do that now as opposed to doing it after we lose in the midterms or lose another presidential election," he said.

The pro-Trump candidates in the race have a very different outlook on the party's future.

"President Trump is still the leader of the Republican Party," Dan Rodimer, a former pro wrestler who calls himself "Big Dan" and has the third-largest fundraising haul in the field, told CNN. "I don't think he's going to go anywhere, ever. I hope he doesn't. If he runs again, I'll be fired up, I'll be excited."

A crowded field and a long-shot campaign

The special election is unusual in that both Republicans and Democrats are competing on the same ballot. There are 23 candidates in total with a breakdown of 11 Republicans, 10 Democrats, one Libertarian and one independent. If no candidate wins more than 50% of the vote on May 1, the race will advance to a runoff between the two candidates who receive the most votes.

The House seat for Texas' sixth congressional seat was previously represented by the late GOP Rep. Ron Wright, who died in February after contracting Covid-19.

The district has been in Republican hands for years, but the GOP margin of victory has steadily declined at the presidential level in recent elections. In 2012, Mitt Romney carried the district with a 17% margin. Trump won it by 12% in 2016 and only 3% last year.

Even so, Wood is widely viewed as running a long-shot campaign facing tough odds.

"Anything's possible with such a crowded field, but I don't think there's much indication that a large chunk of Republican voters are clamoring for an avowedly anti-Trump option right now -- even in a district where Republican performance has dipped in the Trump era," Kyle Kondik, an election analyst at the University of Virginia's Center for Politics told CNN.

Mirroring a reality at the national level where most congressional Republicans have stayed loyal to the former President, almost all of the GOP candidates in the special election have tied themselves to Trump to varying degrees.

Susan Wright, the late congressman's widow who is frequently described as the front-runner, was recently endorsed by Trump who said she will be a "terrific congresswoman" and described her husband as someone "who has always been supportive of our America First Policies." Wright has focused much of her campaign on her husband's legacy, but has also been quick to promote the President's endorsement.

Among other leading GOP contenders, state Rep. Jake Ellzey, a top fundraiser in the race, has said he supported Trump and his policies, while Brian Harrison, a Trump administration official who worked for the Department of Health and Human Services, prominently displays a smiling picture of him standing next to Trump on his campaign website, which says he "fulfilled significant campaign promises for President Trump."

Sery Kim, another Trump administration official in the race who served as an assistant administrator at the Small Business Administration, told CNN that Trump remains "the center of the universe" for the GOP. "He is the most powerful voice in the Republican Party and his policies are what people want," she said.

Kim even gave out her phone number during a live television interview a few weeks ago asking Trump to call her to endorse her.

In some instances, GOP candidates have cast doubt on the integrity of the 2020 election or attempted to rewrite the history of the January 6 Capitol attack by a violent pro-Trump mob.

Asked if he believes the 2020 election was stolen as Trump has falsely claimed, Rodimer said, "I think that we had some serious issues with this election and we've got to make sure that doesn't happen again."

"On January 6, people come to me all the time, they say, 'Big Dan Rodimer, what would you have done differently?' Well, you know what? I wouldn't have been hiding under my desk like all the other folks. I would have been out there, walking to the very, very front, top of the stairs saying, 'hey, the fact is we are all Americans. We want fair and free elections,'" he said.

Kim said of the Capitol attack, "Who knows who was in that crowd? No one knows."

"That's what the media is saying is that 100% of the people there were Trump people," she said. "You know DC, people are curious when they see a lot of people walking around. They join in to go in. You see people who are anti-Trump go to Trump rallies to incite Trump supporters as well."

Wood has heard a similar message on the campaign trail and pushes back against it.

"Nancy Pelosi did not charter a whole bunch of buses to bring in Antifa to the Capitol to break in the windows to create some sort of false flag operation to make the Republican Party look bad," he said.

Reflecting on his outlier status in the race, Wood said that at one point he asked a friend, "Why am I being accused of being sort of a fringe candidate because I'm against insurrection?"

A fight for the soul of the GOP

In a possible indication that an anti-Trump message is not resonating with Republicans in the district, Wood has raised less than a number of GOP candidates and he has seen firsthand how much some voters disagree with what he has to say.

"There is a hardcore MAGA group within the Republican Party that does get very upset with me," he said. "I've had people who were actually there on January 6 come up to me shaking mad that I'm saying the sort of things that I'm saying about that day and also about President Trump."

Wood believes that Trump has taken advantage of the patriotism of Republican voters and manipulated them into believing conspiracy theories and lies, including that the election was illegitimate, to the point that many would be willing to support an attempted government overthrow.

"I still believe in America, and I still believe that America is filled with good patriotic people, but I have come across a number of individuals who seem to love this country so much that they want to destroy it," he said. "They love the Constitution so much that they're willing to get rid of it in sort of a weird twisted way."

The GOP candidate believes, however, that "about 30 to 35% of the party" is open to his message. "They've been incredibly receptive. Even if it's in hushed tones after events, they come up to me afterwards and say, 'thank you for saying this,'" he said.

The path the Republican Party takes next and the extent to which it continues to embrace Trump could go a long way in determining which voters it will attract and who it will repel. The party may have an opportunity to expand its coalition if it distances itself from the former President.

Terri Davis, a Black woman who voted for Wood last Saturday during early voting here, told CNN she tends to vote for Democrats, but isn't a straight party line voter and liked that he's a Republican who believes "the party is going in a direction that is not healthy for our country" and wants to change that direction.

President Joe Biden underperformed Hillary Clinton among voters of color, including Black women in the 2020 election compared to 2016, though Black women voters still overwhelmingly voted for him.

JP Woodruff, a a Rodimer supporter, told CNN he supports the pro-Trump candidate because he "represents truth and freedom, constitutional truth, and that's something we're lacking right now in the left-wing cabal state."

Asked what he meant by "left-wing cabal state," Woodruff said, "truth is no longer being represented in our Constitution and our politicians in Washington right now and that goes for both right and left."

Kinzinger, one of the 10 House Republicans who voted to impeach Trump after January 6, has endorsed Wood in the special election and hopes the race will ultimately send a message about the importance of truth.

"It's important to show folks that there are people, even if it's kind of a David and Goliath fight, there are people that are going to back you and that want you to win if you do the hard thing," he said.

Kinzinger believes that voters who believe the election was stolen or that Antifa stormed the Capitol "are not unreachable," but he acknowledges there's a long road ahead in attempting to break through.

"Part of winning them back is you have to look at how long did it take them to basically get to believe that this was all fake," he said. "It takes time, it takes effort, it takes words, and you can't just say it's not worth the fight if we can't be successful immediately."