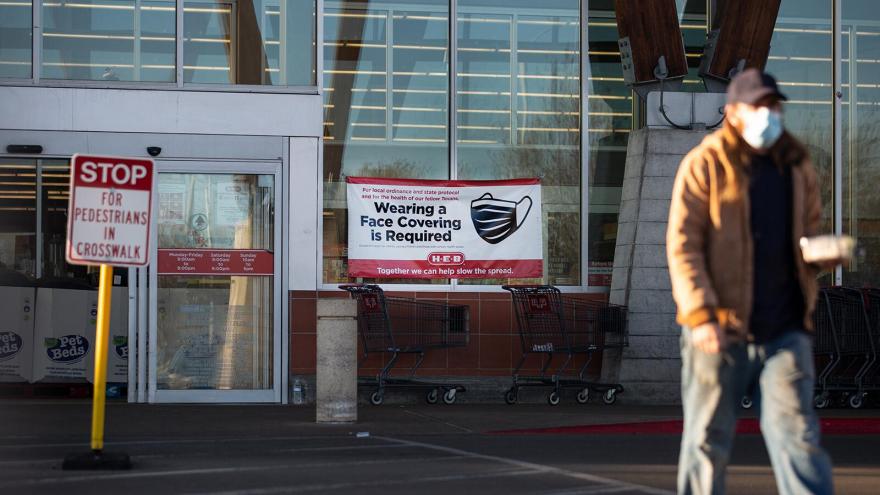 Texas Attorney General Ken Paxton is threatening to sue Travis County and the City of Austin if officials don't back down on local orders that continue to require masks.

Paxton's lawsuit sets the stage for the latest showdown in a long-running, nationwide clash over public health rules that often breaks along political lines. Sixteen states have no statewide mask rule.

Brown's office provided CNN with a statement from the county attorney's office saying they won't "pursue any enforcement actions of this order in deference to the Court."

"The Attorney General's office has filed suit against the City of Austin and Travis County. Travis County has not had to rely on enforcement of its orders to get our community to be responsible. Although the Commissioners Court's order is valid, Travis County will not pursue any enforcement actions of this order in deference to the Court," the statement said.

CNN has reached out to Adler's office and Austin health officials for comment on the lawsuit, but has not heard back.

"We promised the people in this community a long time ago that we would be driven by the data and the doctors and we're going to make good on that promise for however long we can," Adler said earlier Thursday. "The science and the data are very clear that the single most important thing we can all be doing at this point is wearing masks."

Through an executive order that took effect Wednesday, Texas lifted its statewide mask mandate and any capacity restrictions on businesses across the state. Businesses still can choose to require masks on their properties, but the order says that, generally, no local government can mandate mask wearing.

The order provides an exception for regions where Covid-19 hospitalizations rise above 15% of bed capacity for seven days straight. But even then, residents cannot be penalized for not wearing masks, the governor's order reads.

No Texas region qualified for the exception as of Thursday, according to the Texas Department of State Health Services.

In a letter Paxton sent to Adler and Brown prior to filing the lawsuit, Paxton said the decision to require masks or impose limits "does not rest with jurisdictions like the city of Austin or Travis County."

"City/county leaders must not be thinking clearly. Maybe it's oxygen deprivation from quintuple-masking," Paxton wrote in a tweet accompanying the letter Wednesday. "Travis County and Austin have a few hours to comply with state law or I'll sue them."

What the local order says

The Austin order, which also covers unincorporated parts of Travis County, was issued last year and extended at various times by Dr. Mark Escott, the interim medical director and health authority for Austin and Travis County. Austin is the Travis County seat.

On Tuesday, Escott said the local mask order would remain in place through at least April 15, despite the governor's order removing the statewide mandate.

"While vaccine administration is underway, we are still not in a place of herd immunity and need people to wear face coverings in public and around non-household members so we can avoid another surge of cases," Escott said.

The local order says people ages 10 or older generally must wear a face covering outside his or her residence, unless eating or drinking, or exercising outdoors, or driving alone or with people of the driver's household.

City enforcement rules say people who knowingly violate a health authority rule could face a fine of up to $2,000. CNN has reached out to the city of Austin and Travis County for clarification on enforcement and penalties.

'This is just not the time'

Adler said Thursday he disagreed with Paxton's assertion that Austin and Travis County were out of step with Texas law. That law, he says, gives public health officers the ability to enforce rules to protect public health.

"These are the orders of the health authority in central Texas that we're seeking to enforce. And we can't find any time that a state official, a governor, or otherwise, an attorney general, has the ability to be able to stop a local health authority from promulgating rules that are enforceable under our state law," Adler said.

Additionally, "this is just not the time" to eliminate mask rules, Adler said. Covid-19 numbers in Austin have improved, it has taken a lot of work by the community to drive down cases and they're hoping not to lose that progress now.

"This is just not the time to put at risk the opening of schools and the further opening of businesses in a way that can be sustained."

Brown also is undeterred by the attorney general's threat, he told CNN on Wednesday.

"My biggest concern right now is we've only vaccinated 9% of our population here in Travis County," Brown said.

Divisions between local and state leaders

The battle over the mandates represents a widespread challenge across the country -- divisions between local and state leaders on what public health measures should stay in place. And with more governors announcing this month they're easing restrictions, that gap in some cases has only widened.

In Mississippi, after Gov. Tate Reeves announced last week he was lifting county mask mandates and allowing businesses to operate at full capacity, some local leaders expressed disagreement. Among them was Greenville Mayor Errick Simmons, who said the governor's decision created "unnecessary risk" for communities.

"It is challenging in some of these states -- in Texas and Mississippi and so on -- where at the local level, even though the mask mandate has been lifted, public health is still messaging the importance of mask-wearing to prevent spread of the disease," Lori Tremmel Freeman, CEO of the National Association of County and City Health Officials, told CNN Wednesday.

"We're kind of at odds with one another in terms of state to local in some cases," she added.

It's happened before. Over the summer, Georgia Gov. Brian Kemp sued Atlanta Mayor Keisha Lance Bottoms over the city's mask mandate. Kemp argued the mandate violated his emergency order prohibiting local action from being more prohibitive than the state's requirements.

In August, the Kemp announced he was withdrawing the lawsuit.