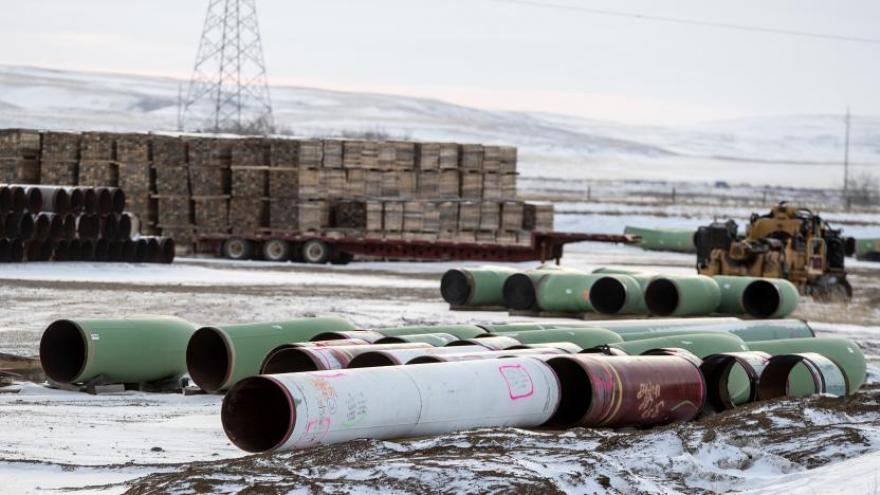 (CNN) -- Twenty-one states, led by Texas and Montana, filed suit on Wednesday against President Joe Biden's decision to revoke the permit for the Keystone XL pipeline -- an effort by Republican state attorneys general to combat the new administration's efforts to address climate change.

Biden's order "cites no statutory or other authorization permitting the President to change energy policy as set by Congress in this manner," Paxton and Knudsen wrote in the complaint, arguing that "the President lacks the power to enact his 'ambitious plan' to reshape the economy in defiance of Congress's unwillingness to do so."

Biden revoked the permit for the pipeline on his first day in office through executive action as part of a series of moves aimed at combating climate change, which also included rejoining the Paris Agreement on climate change and placing a temporary moratorium on oil and gas leasing in the Arctic.

Keystone XL, a planned pipeline that would carry oil from the tar sands of Canada into the United States, has been a political football between climate activists and the oil industry.

The oil industry and Republicans quickly condemned Biden's decision in January to rescind the permit for the controversial pipeline. The move resulted in the layoff of "thousands of union workers," according to TC Energy, the Canadian company behind the Keystone pipeline.

Climate and energy experts, meanwhile, told CNN at the time that the project was inconsistent with both the Biden administration's climate goals and with American energy needs in light of existing oil supply. Energy Secretary Jennifer Granholm, the former governor of Michigan, has said that the Energy Department created a jobs office that will work "hand in glove" with the department's fossil fuels officials to make sure "we leave no worker behind."

The Biden administration's stance and actions to date on climate marks a significant departure from that of former President Donald Trump, who granted the permit to the controversial pipeline and was a fierce advocate for the fossil fuels industry. Among other steps, Trump gutted environmental regulations, attempted to bail out coal miners, installed a former coal lobbyist to lead the US Environmental Protection Agency and helped broker a deal with the Organization of the Petroleum Exporting Countries to rescue shale oil producers.