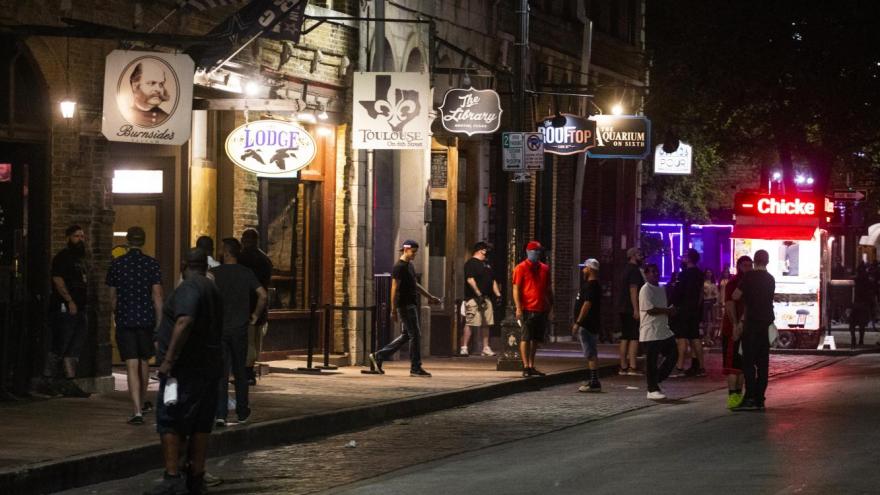 People stand outside bars recently reopened on Sixth Street at night in downtown Austin, Texas, on Saturday, May 23, 2020. The bars are now shutting down for a second time.

(CNN) -- The Houston bars Scott Repass co-owns had been open about three weeks before the governor shut down their business again in response to a surge in new coronavirus cases.

In the short time they were open, Repass says staff followed safety guidelines to a T: they required customers wear masks when moving around. They offered hand sanitizer at the door. Bartenders and servers wore masks. Nobody congregated and almost nobody used cash. But that didn't prove to be enough.

Unsure of how long this second hit may last, Repass has now filed for unemployment. And he's not alone.

Bar owners across the state and in other parts of the country that were forced into a second shutdown say they don't know what this time around may look like -- and whether they'll be able to survive it.

In a news release Friday announcing bars should close again, Texas Gov. Greg Abbott said, "It is clear that the rise in cases is largely driven by certain types of activities, including Texans congregating in bars." The move comes after bars were allowed to reopen on May 22, under the state's second phase of reopening.

Orders to close bars in several US hotspots come as some healthcare professionals have called crowded bar scenes across the country the perfect breeding grounds for the virus.

At least 85 people contracted coronavirus after visiting an East Lansing, Michigan, bar earlier this month. In Louisiana, health officials say they've received at least 100 reports of positive cases from people who visited or worked at Tigerland bars in Baton Rouge.

At least one Idaho county moved back a stage in reopening, announcing bars and nightclubs would not be allowed to remain open after many of the state's new cases were associated with people who reported having a night out. And in California, the governor ordered bars closed in seven counties Sunday, days after saying an increase in cases was driven by young groups and gatherings.

Round two for devastated Florida bars

When cases began surging across Florida, the Volstead bar in downtown Jacksonville shut itself down to conduct another deep cleaning, the bar's marketing director Hana Ferguson said. All staff members were tested for the virus, she added, and were cleared.

"We barely survived the first shutdown and once we were allowed to re-open in Phase 2, were very strict about following all CDC guidelines," Ferguson said. "We've struggled with making ends meet especially with all of the rules that have been put in place."

And now they had no choice but to close their doors a second time after on-premise alcohol consumption was suspended in bars across Florida.

Bars and nightclubs were ordered closed in mid-March. As most counties in Florida entered the second phase of reopening on June 5, bars were allowed to reopen, maintaining a 50% seating capacity inside.

"All they did was flip the switch," says Paul Medrano, who owns two bars in Tampa. "So now you're going from a bar to a restaurant that acts like a bar, so you're not diminishing the people that might get infected because all they're doing is moving them to another location."

"None of this makes sense," Medrano says.

Much like the other bars CNN spoke to, Medrano says staff worked to enforce all safety precautions, even providing masks for incoming customers who didn't have one and keeping distances of at least six feet between each table. But he says that wasn't the case in all institutions.

"It was, to me, the offenders," the bar owner says, of what caused the second shutdown. "It's kind of like elementary school. One person breaks the rules and everybody has to pay for it."

Behind each adjustment states had to make to combat further spread of coronavirus, bar owners say was a devastating financial impact.

Staff members are struggling to make a living, Ferguson says.

"For them, this is their career. They're risking everything to come back to work" only to be forced out, she said.

But there's also the money used to keep the business alive.

Repass, from Houston, says when their bars were first shut down during the initial lockdown, they spent thousands ordering the right equipment to be able to sell their products to-go. They trained their servers and bartenders to a whole different business model.

Then, when the state began lifting measures and bars were directed to open, Repass says the bars poured more money into creating pleasant patios for customers to sit outside, as health officials were recommending. They retrained their staff.

And now, with piling costs and tax deadlines looming, Repass just says he hopes his state has at least hit its peak of new cases -- a sign that would mean things could start getting better soon.

"I would say, my guesstimation is going to be a month, a month and a half and that ... that's going to be pinch," Medrano said.