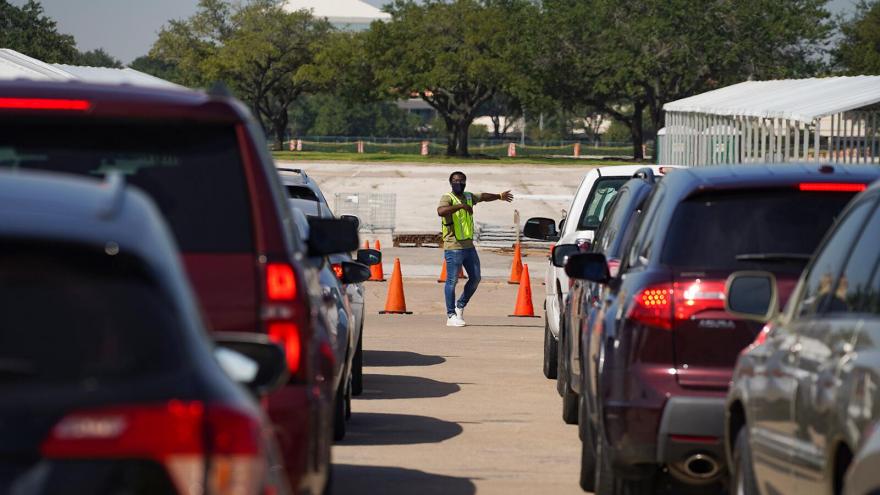 (CNN) -- An abortion fund that helps hundreds of women in the southernmost region of Texas each year has stopped answering its hotline after one of the strictest bans in the nation went into effect this week.

"Our very existence is a risk. The fact that we exist as an organization puts us at risk (of civil lawsuits)," said Zeana Zamora, executive director of Frontera Fund. The group helps people in the Rio Grande Valley -- an impoverished region that is mostly Mexican American -- access abortion care.

The new abortion law along with laws concerning public education and proposed legislation restricting voting access are part of a slew of measures that will greatly impact the lives of people of color. Civil rights advocates and some lawmakers say people of color are powering the population growth in the state and the measures enacted by Republican lawmakers will have dire consequences.

Texas is among the seven states and territories where the non-Hispanic White share of the population is below 50%, according to the Census Bureau. There were 11.4 million Texans who identified as Hispanic in the 2020 Census, making the group nearly as large as the non-Hispanic White demographic group in the state.

Thomas Saenz, president and general counsel of the Mexican American Legal Defense and Educational Fund, said it's clear that the state is in a demographic transition, just as California, New Mexico and Arizona have been before. It's making people in power feel threatened, and the new measures are a negative response to the demographic change, he says.

"These are all laws that at least in part are designed to continue a pattern of discrimination against the Latino community," Saenz said.

"What is happening in Texas is a deliberate attack by far-right politicians who will do anything to quell Black, brown, immigrant, and LGBTQ communities both in Texas and other Republican-controlled states across the country," Martinez Rosas said.

By merely existing, "Republicans see us as threats to their white supremacist agenda."

Most abortions were provided to women of color

The state law that bans abortions as early as six weeks into pregnancy took effect Wednesday, leaving providers and patients afraid of their future.

President Joe Biden launched a federal effort in response to the law, calling it an "unprecedented assault on a woman's constitutional rights," after the Supreme Court denied a request from abortion providers to freeze it.

Black, Asian and Hispanic people made up most of the people obtaining abortions in Texas, according to 2019 state data.

In South Texas, a region with a predominantly Hispanic population, many women already had limited options when it came to abortion care. There's only one clinic in the region and the costs surrounding the procedure are not affordable for many, Zamora said.

A procedure in McAllen costs up to $800, which is considerably higher than in other cities and women often struggle with the added costs that include loss of wages, transportation and child care, she said.

A spokeswoman for the Whole Woman's Health clinic in McAllen said the clinic's staff performed more than 1,600 abortion procedures last year. Frontera Fund provided aid for 400 people seeking abortion care and only a few of them traveled outside the state to get care, Zamora said.

"Our patients are scared and confused and desperately trying to figure out what they can do to get an abortion. We don't know what will happen next. Our staff and providers are so afraid," said Amy Hagstrom Miller, president and CEO of Whole Woman's Health?and Whole Woman's Health Alliance.

Cristina Gomez, 37, decided not to have children a couple of years ago. Some of the reasons behind her decision were climate change and her student loan debt. For her, the ban makes her feel disenfranchised and that her rights are being taken away.

"The decision to make choices for my own body are taken from me by people who don't know me, who don't care about me," said Gomez who is the development director at Annie's List, a political action committee dedicated to electing progressive and pro-choice women at the state level in Texas.

Gomez worries that the law in Texas is a potential precursor to national legislation.

"The national Republican Party treats Texas like a petri dish. They test their oppressive policies and ideologies to see if they can pass them through the state legislature," Gomez said.

Some teachers in Texas are fearful of what will happen to them if a lesson "touches tangentially on racism" due to a new law that restricts discussions of race and history in schools.

It also notes that "a teacher may not be compelled to discuss a particular current event or widely debated and currently controversial issue of public policy or social affairs." Teachers, according to the bill, can't require or give extra credit for a student's political activism.

Renee Blackmon, president of the Texas Council for the Social Studies, said teachers were not teaching critical race theory as some lawmakers argued. But some teachers are becoming hesitant and wonder whether some people would think that a lesson about slavery, which is a part of the state's standard curriculum, is about critical race theory.

Alejandra Lopez, 35, the president of the San Antonio teachers' union, said she didn't feel that her community was represented or valued when she attended public schools in San Antonio as a child. Since becoming an educator, she's tried to change that and developed a training to help teachers reflect on how their lessons approach students' identities and allow them to explore them.

Lopez said the union will continue offering those trainings despite of the law because it is "right for our students and our communities" and the union will defend educators who may be accused of running afoul of the law.

Earlier this week, the state legislature passed a bill that would impose new restrictions on voting and sent it to Gov. Greg Abbott, who has said he will sign it into law.

Senate Bill 1 restricts the hours counties can offer early voting to between 6 a.m. and 10 p.m. and prohibits drive-thru voting and 24-hour early voting.

Democratic state Rep. Christina Morales, one of several lawmakers who fled the state for weeks this summer to prevent the House from having the quorum necessary to vote on the bill, said the legislation was one of the most racist things she had heard on the Texas Capitol.

The bill "is about making sure that the White vote is counted, and not Black and brown people," said Morales, whose district covers parts of Harris County.

Harris County is home to Houston and one of the cities that offered drive-through voting and 24-hour early voting last year. Tens of thousands of people who cast their ballots used drive-through centers and more than half of them were Black, Latino or Asian people, according to Morales.

It was an option for many people who did not have the ability to wait hours in line. Her niece, Morales recalled, waited four hours to vote during the last presidential primary election.

Claudia Yoli Ferla, executive director of the MOVE Texas Action Fund, one of the groups that opposed the voting restrictions legislation for months, said "freedom to vote" took a "heavy blow" this week.

Lawmakers targeted reforms that made it easier for people of color and people with disabilities to participate in the election process, but organizers are redoubling their efforts to ensure people remain engaged.

"Our generation is more diverse than ever. We are young, we are Black, we are brown. We are the largest and most diverse electorate in history. We are engaged, and we are powerful," Ferla said.