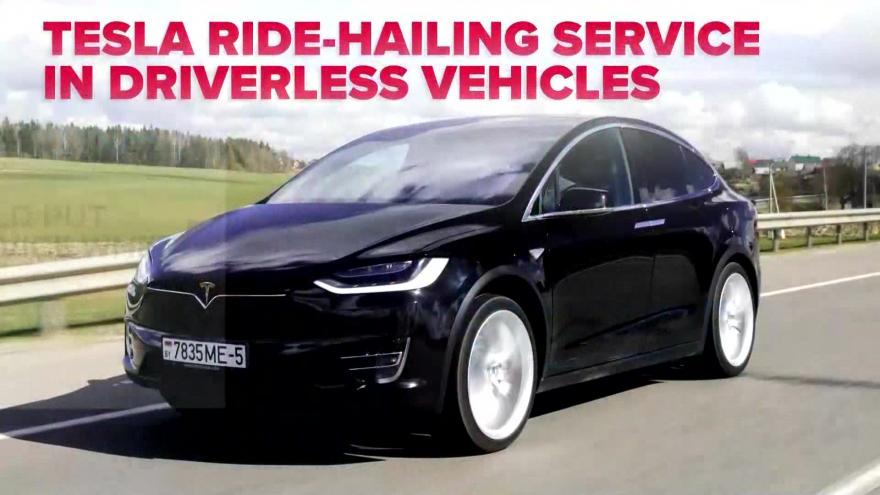 (CNN) -- The advances Tesla has made with its autonomous driving technology are impressive, but perhaps more impressive is the company's raw courage. Or you can call it foolhardiness, if you like.

The timeline Tesla set out toget fully self-driving cars on the road is aggressive. The company announced at an investor conference in Palo Alto Monday that it's ready to turn on fully autonomous capability in all of its cars by some time next year. It then plans to roll out an automated taxi service that would allow Tesla owners to rent out their cars for rides while they aren't using them.

Cruise, a San Francisco company funded by General Motors and Honda, has said it will have self-driving taxis on the road by the end of this year, but often hedges that they will be "gated by safety." The service will initially operate in limited markets, presumably San Francisco, and may still have trained safety drivers sitting ready at the wheel, at least at first.

Waymo has already begun giving taxi rides in Arizona, but only to preselected riders and, again, with trained drivers behind the wheel. Those drivers are taught to monitor what's happening and to be ready to slam on the brakes or grab the steering wheel as needed.

Tesla, on the other hand, is getting ready to simply release its self-driving cars into customers hands. In most places, a driver will legally be required to be at the controls but this will likely be the owner, not someone specifically paid and trained to monitor the operation of a self-driving vehicle.

Tesla forecasts that owners who make their cars robo-taxis could make $30,000 a year, offsetting much of the cost of the car.

"It's basically crazy to buy any other car than a Tesla," Musk said.

There are reasons behind Musk's bold predictions, things that, he says, put Tesla ahead ofother companies making self-driving technology.

First of all, the company claims it has "the best chip in the world" for making and double checking driving decisions continuously in real time. (Chip maker Nvidia has contested this claim.)

Musk also noted that most of Tesla's customers are out on the road every day driving mile after mile while, in the background, testing Tesla's self-driving software. There's little need for running software simulations -- Musk calls that "grading your own homework" -- because Tesla has so many real-world tests going on all the time, he said.

The idea that a Tesla has all the technology it needs to enable self-driving may be surprising if you take even a casual look at a Tesla and compare it to the self-driving cars Waymo and Cruise are testing. The Tesla car hasn't got any weird looking stuff on the roof, for example.

Those lumpy things are called lidar scanners and Tesla cars don't have them at all. Lidar is like radar but uses laser light instead of radio waves. Musk claims he doesn't "super hate" lidar, but everything else he says about the technology indicates that, actually, he really super hates it, at least for cars.

"Lidar is lame," he said, calling it expensive and pointless. Cameras, radar and sonar -- like radar but with sound waves -- are sufficient and far cheaper. Other companies also use those technologies but lidar, as well. Musk predicted that companies currently relying on lidar would dump it after a while. Others in the field differ strongly. For example, Srini Gowda, director of autonomous driving for the Chinese electric car maker Byton, called lidar absolutely necessary because of its unmatched three-dimensional acuity. Nothing else can detect where an object is and see what it is as well, he said in an email to CNN.

The thing that makes Tesla stand out most though, is the utter lack of hedging. While other autonomous car makers are dialing back expectations, Musk and Tesla are dialing them up. There's no cautious tone. No "gated by safety" here.

Presumably that's because Musk and Tesla actually believe their technology is at least substantially safer than unaided human drivers. Tesla and Musk have already made such claims about the company's Autopilot driver assistance technology saying that, despite a few headline making incidents, Autopilot users have fewer crashes, overall, than those who don't use it.

There will, of course, be regulatory issues to overcome while rolling all this out but that seemed to be the one limitation Musk allowed. Well that and Tesla's well-known tendency to simply miss deadlines all on its own, something even Musk, himself, admitted. But, late or not, Tesla does also have a tendency to actually do things it says it will do sooner or later.