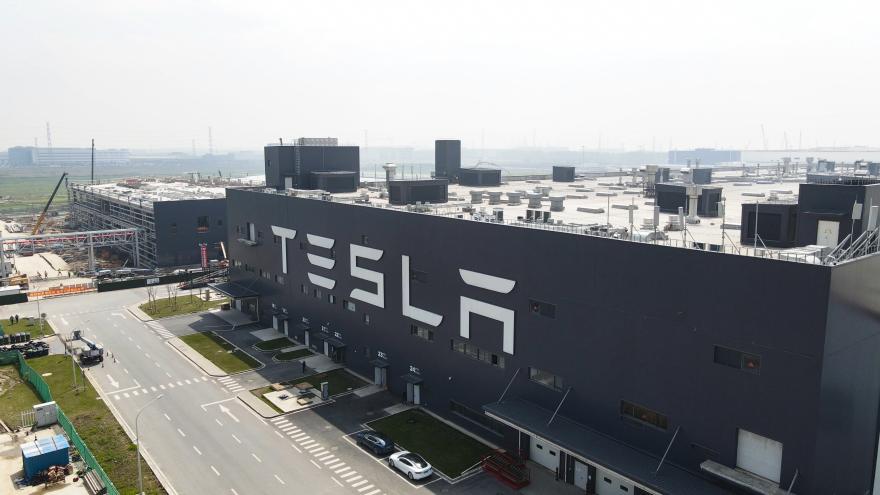 (CNN) -- Covid lockdowns in China resulted in a rare drop in production and sales for Tesla in the second quarter.

The electric automaker reported that completed sales dropped nearly 18%, to about 255,000 vehicles in the second quarter compared to the first three months of the year. Production fell 15% to 259,000.

The company's factory in Shanghai was shut for several weeks in April due to lockdown rules in the city aimed at combating a surge in Covid cases. Problems getting parts from Tesla suppliers also limited Tesla's production even after the plant reopened. The lockdowns likely cost Tesla production of about 70,000 vehicles in the quarter, according to Dan Ives, tech analyst for Wedbush Securities.

The company's statement said the issues Tesla faced in the early months of the quarter are now mostly behind it.

"Despite ongoing supply chain challenges and factory shutdowns beyond our control, June 2022 was the highest vehicle production month in Tesla's history," it said.

Tesla does not release the geographic breakdown of sales in its monthly sales and production report. Only 45% of its revenue last year came from US sales, according to company filings. Industrywide car sales in much of China ground to a halt during much of the quarter due to the lockdowns. Most of Tesla's non-US sales came from vehicles built in Shanghai.

Still, it marked the first time since early 2020 that the company experienced a drop in either sales or production compared to the previous quarter. That sales declinealso was due to the lockdowns associated with the early global outbreak of Covid.

Analysts surveyed by Refinitiv had been expecting the company to post a 46% increase in revenue in the quarter compared to a year ago, and a 51% jump in adjusted income. The more modest increase in year-over-year sales could temper those expectations, and put further pressure on the company's share price. Shares of Tesla have fallen 35% so far this year.

The company opened two new plants in the quarter, one in Germany and another in Texas. But problems ramping up production at those factories meant the output at those plants was "puny" in the first two months of the quarter, Tesla CEO Elon Musk said in a recent interview.