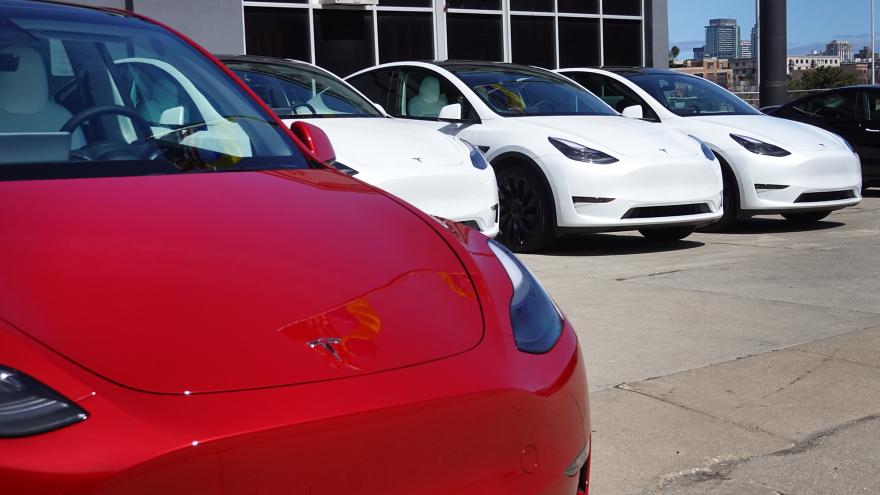 (CNN) -- Tesla once again bucked auto industry trend and reported an increase in car sales, despite the shortages of computer chips and other logistical woes that have forced other carmakers to significantly scale back production.

The company said it sold 310,000 cars in the first quarter, up only slightly from the 309,000 it sold in the fourth quarter of last year, but a 68% increase from the sales in the same quarter a year ago.

Tesla was able to do that even though its two new factories -- one outside of Berlin, the other outside of Austin, Texas, started producing and shipping cars only weeks ago. Tesla does not break down where its cars are produced or sold.

The company's sales and production output were "better than feared" according to Dan Ives, tech analyst with Wedbush Securities.

He said the Tesla results were impressive "in light of recent Covid shutdowns in China and massive logistics complications delivering units to customers in Europe. We believe roughly 20,000 to 25,000 units were pushed out of the first quarter into the second quarter due to the logistical and factory issues which makes this underlying demand number still look strong with a robust trajectory for the rest of 2022."

For example, General Motors will temporarily shut its Fort Wayne, Indiana, plant that builds its best selling Silverado and Sierra pickups for the next two weeks due to the chip shortage.

GM's US sales fell 20% from a year ago, although they were up 16% from the fourth quarter. But its sales total of 513,000 cars and trucks in the first quarter left it about 2,000 vehicles behind Japanese rival Toyota in the race for the most US sales, even as Toyota's sales were 15% lower than they were a year ago.

Toyota captured the top US sales title in 2021, the first time in nearly a century that GM did not lead the industry in sales in its home market.

Ford has yet to report first quarter sales. Stellantis, the company that includes what used to be known as Fiat Chrysler, reported a 14% drop in sales from a year earlier.

Honda's US sales fell 23%. The smallest decline among major automakers were at Hyundai and Kia, which operate separately but have common ownership. Their US sales fell only about 5% from a year ago.

The limited availability of cars, coupled with strong demand by consumers, has resulted in record-high car prices. Most buyers are having to pay more than the manufacturer's suggested retail price, or sticker price, rather than the typical discount from MSRP that was the norm in past years.