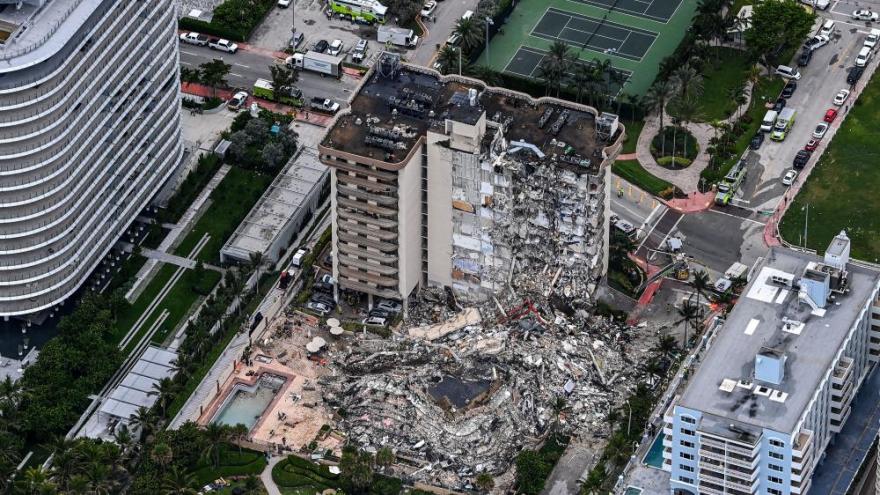 An aerial view shows search and rescue personnel working on site after the partial collapse of the Champlain Towers South in Surfside, Florida, on June 24, 2021.

(CNN) -- The families of victims and survivors of the Champlain Towers South collapse in Surfside, Florida, that killed 98 people have agreed on a tentative settlement of more than $55 million with three defendants in a wrongful-death lawsuit, according to court documents filed Tuesday.

Insurers representing the engineering firm responsible for inspecting and certifying the building's structural integrity, Morabito Consultants, and the firm representing the condo association, Becker & Poliakoff P.A., have agreed to settle for $16 million and $31 million, respectively, according to a joint motion to stay all claims against the defendants.

Another defendant, DeSimone Consulting Engineers, has agreed to settle for $8.55 million, according to the filing.

A portion of the Champlain Towers South building collapsed in the middle of the night on June 24, 2021. The victims ranged in age from 1 to 92 years old.

In a statement Tuesday, Becker reiterated its denial of responsibility "for the collapse or the resulting damage" and said the settlement "is not a finding of fault."

"The settlement amount is based on the decision of our insurance carriers given the level of coverage carried by the firm as a responsible business," the statement said.

"It is important to note that the cause of the collapse has yet to be identified and we continue to believe that culpable parties should be held accountable. Becker stands by the fact that we did what law firms are supposed to do -- provide counsel on legal matters to the condo association board of directors. We are pleased this matter was quickly resolved and sincerely hope the insurance settlement will bring some relief to those impacted by this terrible tragedy."

Morabito issued a statement last month denying any culpability in the collapse but acknowledging the tragedy "shocked and saddened the entire team." The statement said a settlement was agreed to because the families deserve compensation "so that they may focus on healing."

Maryland-based Morabito performed a 2018 structural analysis of the building.

The tentative settlement does not include any admission of wrongdoing from the companies.

An attorney representing some families of the victims, Stuart Grossman, told CNN Tuesday: "My clients, four separate families, are quite pleased with the amounts of these settlements and the fact that they came early as opposed to much later in costly litigation."

The concrete in the pool and underground garage area has been a focus as engineers and government officials investigate the cause of the collapse, CNN has reported.