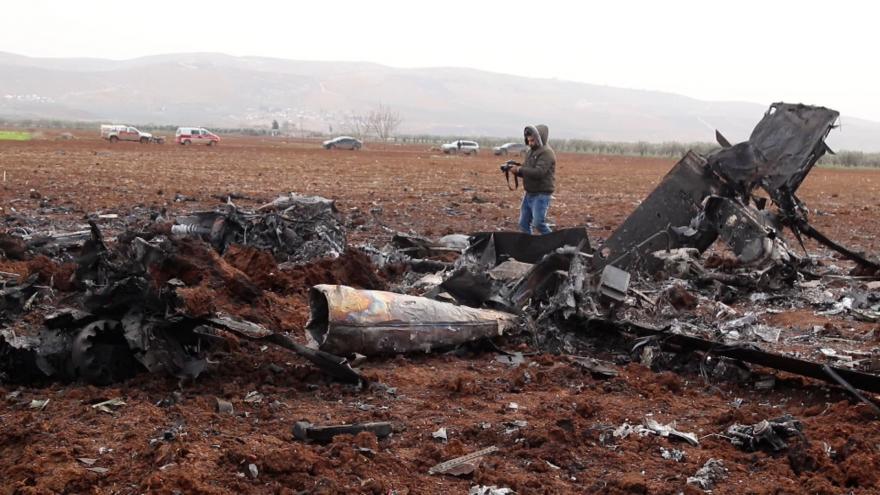 (CNN) -- President Joe Biden watched in real time Wednesday as US commandos landed in Syria to raid a three-story home, surrounded by olive trees, where the top leader of ISIS was living with his wife and members of his family.

From the head of the Situation Room table, Biden watched anxiously as an American helicopter suffered mechanical problems on the ground.

There was relief in the room when children emerged from the first floor of the building, running to safety.

Moments later, an explosion rocked the site: a suicide detonation that killed Abu Ibrahim al-Hashimi al-Qurayshi, his wife and his children, blowing their bodies outside the building and onto the surrounding land.

The details of how Biden monitored the raid came from senior administration officials, who recounted it in detail on Thursday morning. Their description was of a successful operation that took out a critical terror leader while avoiding any American casualties. The US officials insisted the only civilian casualties were those caused by the leader himself when he blew apart his residence with his family inside.

It was the highest-profile counter-terror operation of Biden's tenure, and officials appeared intent on using it to cast the President in a decisive light. In some ways, it mirrored raids ordered by Biden's two predecessors to take out terror leaders in their homes, each of which was monitored in real time on a secure feed.

Like after those missions, the White House has capitalized on the moment. It quickly released a photograph of a jacket-less President in the Situation Room, staring intently ahead as the raid unfolded.

Biden emerged midmorning to deliver a brief statement about the mission from the White House Roosevelt Room.

"This operation is a testament to America's reach and capability to take out terrorist threats no matter where they try to hide anywhere in the world," he said, issuing a message to terrorists who are still at large: "We will come after you and find you."

He added that every precaution had been made to protect civilians, saying, "We do know that as our troops approached to capture the terrorist, in a final act of desperate cowardice with no regard to the life of his own family or those of others in the building, he chose to blow himself up ... rather than face justice for the crimes he has committed."

When Biden was vice president, he had opposed the risky mission to take out al Qaeda leader Osama bin Laden at his compound in Pakistan, an ultimately successful operation that was designed to limit civilian casualties.

Biden's mission mirrored that operation in some ways, and he similarly decided upon using American special forces to take out the ISIS leader instead of ordering an airstrike on the home, a sign his views of the risks had shifted in the more than 10 years since bin Laden's death.

"Knowing that this terrorist had chosen to surround himself with families, including children, we made a choice to pursue a Special Forces raid at a much greater risk to our own people rather than targeting him with an airstrike. We made this choice to minimize civilian casualties," Biden said on Thursday morning.

US descriptions of the raid were derived from accounts on the ground and the real-time feed. In the past, early US accounting has later turned out to be incomplete or wrong. Sources on the ground reported at least 13 fatalities during the raid, including six children and four women, according to the Syrian civil defense group the White Helmets.

In Washington, officials described an operation months in the making meant to incapacitate a shadowy leader of a terror group that some feared was regrouping.

"We think the impact of (the killing of Qurayshi) is going to be a blow to ISIS," a senior administration official said, saying the terrorist "was heavily involved in running many of the operations."

Officials said he oversaw ISIS branches abroad -- including the one in Afghanistan responsible for the deaths of US Marines last year -- and played a key role in the genocide of the Yazidi ethnic minority.

The US' intelligence gathering on the leader of ISIS had ramped up over the fall and culminated in a detailed briefing to Biden on December 20 on an operation to capture Qurayshi, another senior administration official said.

That official declined to detail how the US had finally zeroed in on the precise location of the terror organization's leader but noted that Qurayshi had had couriers to communicate with the outside world that were part of the intelligence that led to his location.

Five days before Christmas, Biden sat down with Defense Secretary Lloyd Austin, the commander of US Central Command, Gen. Frank McKenzie, and others to work through in painstaking detail how an operation to capture Qurayshi would work and what risks it would entail. The operation was fraught with risk because of the civilians who occupied the same building as the ISIS leader.

At one point, top Pentagon officials brought a tabletop model of the location to the Situation Room to walk the President through their plans.

The target, Qurayshi, never left his compound. Living on the third floor with his family, he emerged only occasionally to bathe on the roof. Families with no connection to ISIS lived on the first floor, apparently without knowledge of the terrorist two stories above them.

It was months ago that the US had learned the leader of ISIS was living there, running his terror operation through the network of couriers. When Biden was briefed by operational commanders in December, he ordered the Pentagon to take precautions to minimize civilian deaths -- a difficult proposition for a target who appeared to intentionally surround himself with children and families as protection.

US forces who carried out the mission rehearsed the operation, including the safeguards to protect innocents. When the American team landed, they announced their presence loudly, asking those inside the building to leave and for others in the surrounding residential area to stay away.

The military had planned for a two-hour operation at the scene, underscoring the need to minimize civilian casualties.

Biden gave final approval of the operation on Tuesday in the Oval Office, where he was briefed by Austin and Gen. Mark Milley, the chairman of the Joint Chiefs of Staff.

There was "tremendous tension" in the Situation Room a day later as the President, Vice President Kamala Harris and members of Biden's military and national security teams monitored the situation in "real time."

Austin and Milley watched from the Pentagon.

Months in the making

Biden had been "very steeped in the operational details" after months of planning, a senior administration official said, which included the model of the building housing the top ISIS leader brought by military leaders into the Situation Room in December. He engaged in a "constant give and take" with his military commanders.

By early December, US intelligence officials were certain Qurayshi was living in the residence.

Planning was incredibly complex, the official said. Qurayshi was living in a residential neighborhood on the third floor of a building housing families, including children.

Qurayshi himself rarely left the building and his "human shields," officials said, save for occasional baths on the roof.

The objective was to capture Qurayshi alive. He had revealed valuable information when the US detained him in Iraq in 2008, and there was a distinct possibility he could do so again, this time as the head of ISIS. Adding to Qurayshi's perceived intelligence value was the fact that while in US custody, "he sang like a canary," a top former counterterrorism official familiar with the interrogation reports said.

"Investigators gained enormous insights about [al Qaeda in Iraq] because of what he told them," said Ambassador Nathan Sales, the US coordinator for counterterrorism at the State Department under President Donald Trump.

US officials "of course" considered that Qurayshi might detonate himself during the operation, in the same way ISIS leader Abu Bakr al-Baghdadi had done during the raid that killed him in 2019. It was Biden himself who had asked about the possibility that Qurayshi would be armed with a suicide vest or other type of explosive.

That is precisely what happened. Inside the Situation Room, Biden received a report of a "significant explosion," which officials say ultimately killed Qurayshi and his family.

"That happened fairly early in the operation," the senior administration official explained. From there, things ran in a "linear fashion," and all deaths and casualties were a result of actions of members of ISIS, the White House alleged.

The blast occurred before any US forces entered the building, destroying the third floor and sending bodies into the surrounding area.

The explosive was far larger than what US officials assumed Qurayshi would use when they modeled how an explosion might affect the building -- beyond what a suicide vest could do, a senior administration official said -- tearing apart the top of the building. As a result, US officials believe the entirety of the third floor itself may have been wired with explosives, the official added.

Military engineers had determined ahead of time the blast would not cause the building to collapse.

"I doubt he knew that when he set off that detonation," a senior administration official said. "It was probably his intent to kill everyone in that building."

Still, the operation was not complete. A top ISIS lieutenant was on the floor beneath Qurayshi, facilitating day-to-day operations of the terrorist organization. When US forces entered the building, he barricaded himself in his quarters with his wife on the second floor and engaged American forces. The ISIS lieutenant was killed.

After his death, a number of children emerged from the second floor. They were removed to safety.

A US helicopter had "mechanical issues" during the raid and was "properly disposed of at some distance from the site," an official said. Those issues had nothing to do with "any kind of hostile action."

"Ultimately, that helicopter was able to extract itself from the immediate target area and, under control, able to land in another location where the decision was made to disable it and destroy it," the official said.

As the US forces departed the site, they obtained "a visual ID jackpot" of Qurayshi -- military jargon for a positive identification of the target using his facial features. They also ran biometrics on Qurayshi's fingerprint, which matched.

Tension in the Situation Room turned to "relief" when the first reports came in from the raid. A family on the first floor, including a man, a woman and several children, who officials believed were unaware of the ISIS members living around them, were "led to safety" away from the building.

But the situation remained "tense" even as the troops left the area. While departing, another group described as "hostile" by the Pentagon opened fire on the US helicopter. Officials say it was members of an al Qaeda affiliate, since the area is a stronghold for Hay'at Tahrir al-Sham. Helicopters targeted the group, killing two members before the rest fled.

When the operation had concluded, Biden offered only a few words.

"The President was obviously pleased with the reports from his commanders," officials said. Biden had "tremendous praise" for our team.

The officials said that as he left the Situation Room, Biden said, "God bless our troops."