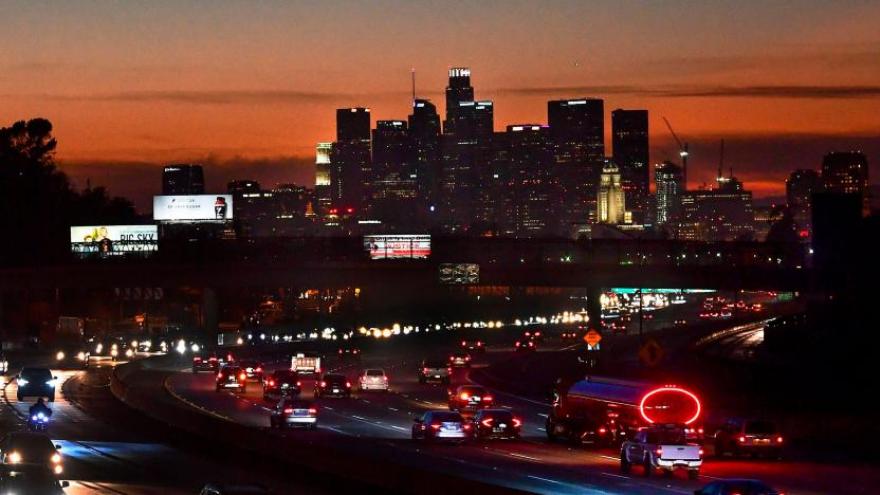 Southern California, including Los Angeles the and San Joaquin Valley, will be under a stay-at-home order starting Sunday night.

(CNN) -- Southern California and San Joaquin Valley residents will be under a stay-at-home order after the intensive care unit capacity in the two regions fell below 15%, triggering a mandate issued by the governor earlier this week that aims to bring down the soaring number of Covid-19 hospitalizations.

The order goes into effect Sunday at 11:59 p.m. PT for the some 27 million people in the regions, which includes Los Angeles and San Diego.

That follows a proactive order issued by six San Francisco Bay Area jurisdictions on Friday for its almost 6 million residents. It also goes into effect Sunday.

Gov. Gavin Newsom on Thursday announced that any region that fell below the 15% ICU capacity threshold would be placed under stay-at-home orders.

Southern California, the most populous of the five regions named by the governor, reported that its ICU availability fell to 12.5% on Saturday. In the San Joaquin region, capacity was 8.6%, according to a government release.

California again had its highest number of new coronavirus cases and Covid-19 hospitalizations for one day on Saturday, reporting more than 25,000 confirmed new infections. More than 10,200 people are hospitalized.

Under the order, business that must close include bars, wineries, personal services like hair salons and barber shops, museums, movie theaters, playgrounds, amusement parks and indoor recreation facilities. Travel is prohibited except as necessary for permitted activities.

Schools that are already open for in-person learning can remain open along with critical infrastructure businesses. Retail business may stay open but at 20% capacity, and restaurants are limited to take out and delivery only.

The order will remain in effect for at least three weeks and will only be lifted when a region's projected ICU capacity meets or exceeds 15%. This will be assessed on a weekly basis after the initial three-week period.

The Bay Area order will be in effect until January 4, 2021, even though the region's ICU capacity was at 21.2% capacity Friday, according to a government website.

"I don't think we can wait for the state's new restrictions to go into effect later this month," Contra Costa Health Director Chris Farnitano said Friday. "We must act swiftly to save as many lives as we can. This is an emergency."

The Southern California region is made up of five of the most populated counties in California -- Los Angeles, San Diego, Orange, Riverside and San Bernardino counties.