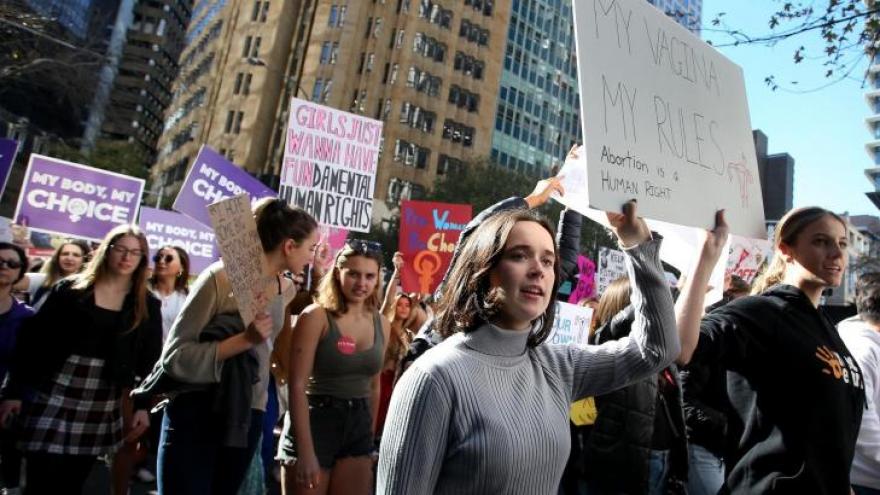 Tennessee lawmakers are studying legislation that would impose a near-total ban on abortion in spite of a similar Alabama bill already facing a challenge in federal court.

(CNN) -- Tennessee lawmakers are studying legislation that would impose a near-total ban on abortion in spite of a similar Alabama bill already facing a challenge in federal court.

The Tennessee Senate Judiciary Committee held hearings Monday and Tuesday on a bill that would ban abortions "when a viable pregnancy is presumed to exist or has been confirmed," and punish non-compliant providers with up to 15 years in jail and a $10,000 fine.

The Senate bill would amend and expand upon a stalled House bill that seeks to ban abortion at the detection of a fetal heartbeat, which can occur as early as six weeks into a pregnancy. The measure goes further by defining viability based on either a fetal heartbeat or the presence of HCG, a pregnancy hormone that can be detected via blood test as early as 10 days from conception.

Many women do not know that they are pregnant by either point. The widely accepted court standard for viability is 24 weeks.

Alabama passed a similar law in May banning nearly all abortions that has already been challenged in court.

Backers of the legislation in Tennessee, which is in a different federal circuit than Alabama, said that they are looking ahead to a potential Supreme Court challenge to Roe v. Wade.

"To be honest, if the 11th circuit rules one way and the 6th circuit rules another way, that's exactly how you get to the Supreme Court," said David Fowler, a former Tennessee state senator who's now the president of the Family Action Council of Tennessee.

Like Alabama's ban, the Tennessee Senate bill would make exceptions to protect the life of the mother, but not for instances of rape or incest.

"Just because there was a horrible thing done to somebody, doesn't mean some else should lose their life because of that act," Pody told CNN in an interview.

"I still have not heard a valid argument in terms of why one bad act should kill somebody else," Pody added.

The Tennessee Senate Judiciary Committee cannot vote on the measure during this summer session. But Pody anticipates that the measure will pass out of committee and in a full vote during the chamber's regular session in January -- and hold up in court, despite the pending challenge in Alabama.

"Each circuit will look at it a different way, we just need to see how each circuit addresses it," he said. "Just because they address it a certain way in (Alabama's) circuit doesn't mean they'll address it the same way in the 6th circuit."

But Democratic State Sen. Katrina Robinson said Monday that "there have been a lot of questions to the constitutionality of the bill" at all stages.

"Our view is that it will not stand up in the Supreme Court, and we already expended quite a few funds on unconstitutional legislation that passed in the past," she said, citing the challenge against the state's 48-hour abortion waiting period statute from 2015.

Tennessee Gov. Bill Lee, a Republican, has not taken a position on the amended Senate bill.

"The governor has said that he is in support of legislation that would reduce the number of abortions and protect life, and he also believes that any legislation needs to be thoughtful and strategic so that it actually accomplishes the goals it sets out to do," Chris Walker, a spokesman for Lee, told CNN in a statement. "With that in mind, he wants to carefully study the various proposals and ideas and has not endorsed or backed any specific piece of legislation."