Tennessee 8th-grader challenges lawmakers to spend a day in wheelchairs 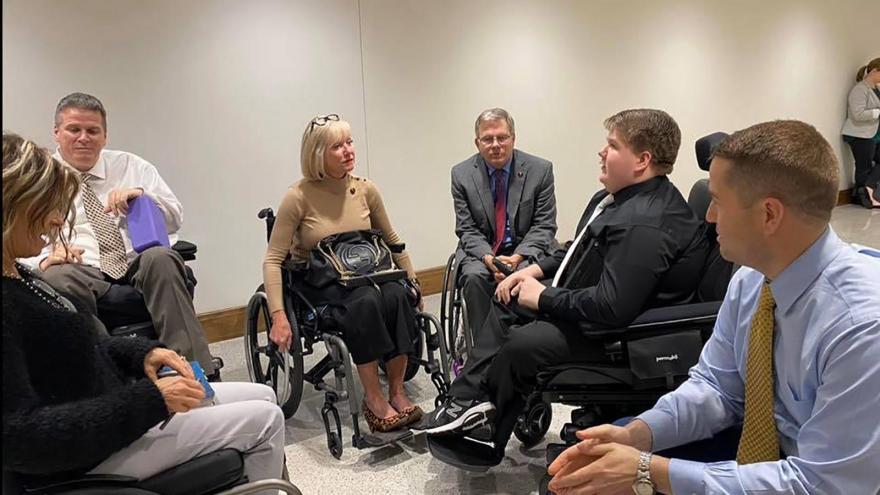 Alex Johnson, in black, talks with Tennessee lawmakers who participated in his "Spend a Day in My Wheels" challenge.

(CNN) -- Alex Johnson has been in a wheelchair since he was a little boy, but says it's still hard to explain all the challenges he faces every day.

The Tennessee eighth-grader convinced a group of state lawmakers to spend a day in wheelchairs earlier this month, so they could experience those challenges for themselves.

"I could talk to you for hours and hours about the difficulties people in wheelchairs face on a daily basis," Johnson said in a speech to lawmakers, CNN affiliate WSMV reported. "Until you actually sit in a chair, you'll never fully understand."

The 14-year-old actually came up for the idea for the "Spend a Day in My Wheels" challenge when he was in the fifth grade, to help his classmates understand things from his perspective, according to a news release from the Tennessee House GOP. He attends Friendship Christian School in Lebanon, Tennessee.

Johnson has a form of skeletal dysplasia, which affects the growth of bones and cartilage, and he told WSMV that he was able to walk when he was little, but has used a wheelchair since the second grade.

He told WSMV that he didn't have any previous experience with wheelchairs.

"Even in a building that is handicap accessible, still you bump into doors. You bump into walls. Some of the doors become very heavy for someone in a wheelchair. Opening a refrigerator door, doors seem to be a pretty big challenge," he told WSMV.

The Permobil Foundation supplied the wheelchairs, which the lawmakers used to attend meetings, work at their desks and do other regular activities.

Boyd said in a statement that the experience was eye-opening and that he had no idea how frustrating it would be to get around in a wheelchair.

Johnson said he hopes the experience will inspire the lawmakers to help make the world more accessible.

"They can influence things," he told WSMV. "They can help people achieve more independence."