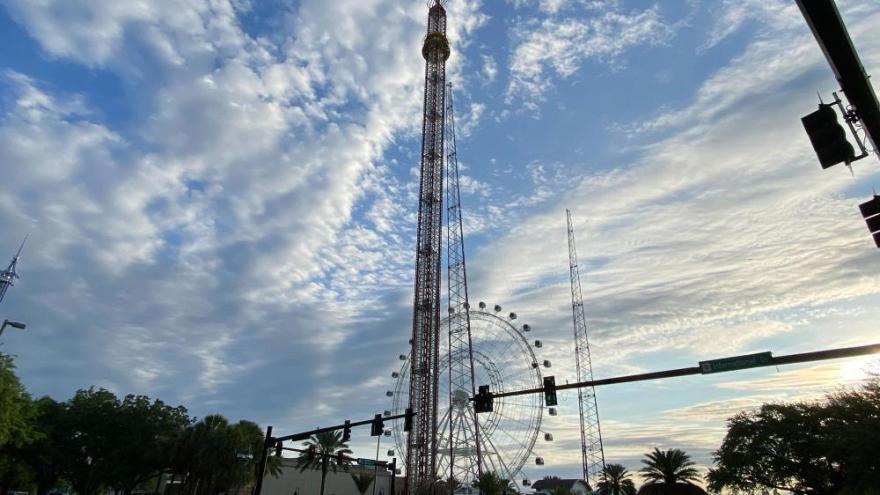 The seat of a teen who fell to his death from an amusement park ride in Florida last week was still locked, according to an accident report obtained by CNN that is based on ride employee witnesses.

(CNN) -- The seat of a teen who fell to his death from an amusement park ride in Florida last week was still locked, according to an accident report from the state.

Tyre Sampson, 14, fell last Thursday from the FreeFall drop tower at ICON Park in Orlando, authorities said. The FreeFall takes riders up and then drops them nearly 400 feet at speeds that reach more than 75 mph, according to the park.

Sampson came out of the seat when the magnets engaged to slow the ride during the descent, according to the report, which was based on ride employee witnesses and was obtained by CNN.

"Harness was still in a down and locked position when the ride stopped," said the report filed by the operator with the fair rides division of the Florida Department of Agriculture and Consumer Services.

The report named three witnesses, all listed as employees.

There are also questions around whether the teenager may have been too large to be allowed on the ride.

The ride's operations and maintenance manual, which has been posted online by the Florida Department of Agriculture and Consumer Services, indicates the maximum passenger weight is 130 kilograms (approximately 287 pounds).

"Be careful when seeing if large guests fit into the seats. Check that they fit within the contours of the seat and the bracket fits properly. If this is not so -- Do not let this person ride," the manual states.

It's not clear whether Sampson fit the contours of the seat or if the bracket fit properly.

CNN has reached out to ride operator Slingshot Group and ICON Park to ask whether Sampson fit properly.

Video circulating on social media, purportedly of the ICON Park incident, shows a person falling from their seat about five seconds into the ride's drop, perhaps about two-thirds of the way down, as the ride slowed as it approached the ground.

The FreeFall ride is closed while the accident is being investigated. And on Tuesday, Slingshot Group said it had suspended another of its rides, the SlingShot.

"We are heartbroken by the loss of Tyre Sampson and absolutely devastated for his family and loved ones," the group said in a statement.

"We have suspended the operations of the FreeFall ride and the Slingshot ride at Icon Park. We are fully cooperating with the authorities at the state and local levels who are investigating this tragic incident. We plan on providing additional information in the coming days, as we learn more," the statement said.

ICON Park on Monday said it had demanded that Slingshot Group suspend them both "until such time as a thorough investigation by the appropriate authorities has been completed and all parties are satisfied that the rides are safe for the public."

The Orange County Sheriff's Office is investigating the death. No criminal charges have been filed but the investigation remained open, the sheriff's office said Friday.