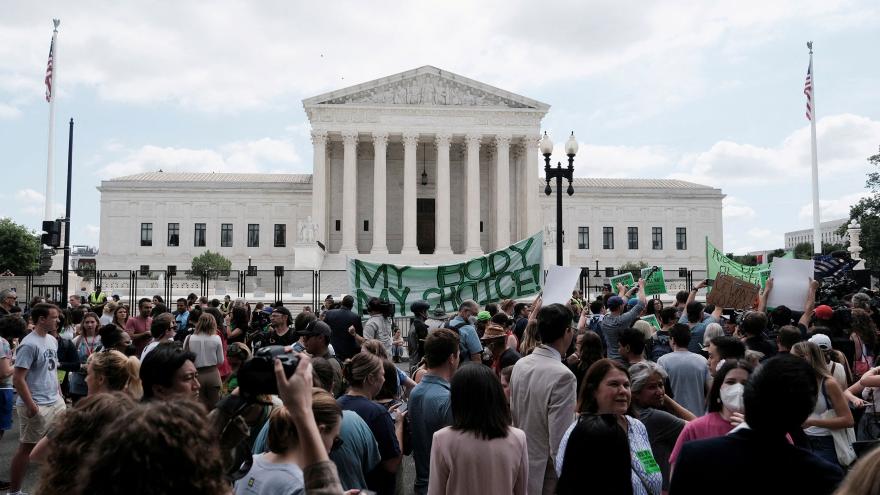 (CNN) -- After the Supreme Court overturned Roe v. Wade on Friday, holding that there is no longer a federal constitutional right to an abortion, protesters and supporters of the ruling gathered at the high court's building in Washington, DC, and in other cities nationwide.

Similar demonstrations are planned across the country over the weekend, according to CNN's research. Organizations like Planned Parenthood, Bans Off Our Bodies and Women's March are among the groups organizing the events.

The crowd then moved across the street to the Wesley Bolin Plaza, where police used the tear gas after a monument was vandalized, Graves said.

"While working inside we were interrupted by the sound of bangs and smell of tear gas," Arizona State Rep. Sarah Liguori, a Democrat, tweeted from inside the building. She added: "Protestors cleared from the Capitol."

The demonstrations come after several Arizona abortion providers said they preemptively paused abortion services due to lack of legal clarity on the matter, according to posts on their websites.

Arizona State Rep. Justin Wilmeth, a Republican, tweeted that the legislators were working on a couple of policy items when they heard the protesters.

"As I heard it, some either banged on Senate windows or broke them and then DPS launched smoke bombs to disperse the crowds. Pure chaos for a bit," Wilmeth tweeted.

In the nation's capital, one person led protesters in front of the Supreme Court in a chant of "Hands off! Hands off!" and a call-and-response of "My body! My choice!"

One woman told CNN affiliate WJLA that the decision was an outrage.

Protesters asked those in attendance to donate to abortion advocates and purchase abortion pills to distribute to others.

Abortion rights opponents were also present in front of the Supreme Court. After the decision came down, a man -- standing amid placards including the messages "Roe is dead" and "I am the post-Roe generation" -- sprayed champagne in the air above others who were celebrating. There were several dozen abortion-rights opponents at the site during the afternoon, but it appeared they had filtered out of the crowd by evening.

In New York's Greenwich Village, thousands of people marched and chanted in the streets. One of the chants directed the f-word at Justice Brett Kavanaugh. There were some anti-abortion activists at the march, but they were keeping a low profile and there were no confrontations seen by the CNN crew walking with the protesters.

Demonstrators in Los Angeles clogged the 110 freeway as it passed through downtown, blocking traffic. While abortion will remain legal in California, the protesters said they were showing their concern and support for women in other states.

In Atlanta, several hundred people in two different demonstrations merged and gathered in front of the Capitol. Almost all the people were protesting the decision. A CNN crew saw one counter-protester where one group began its march a few miles away.

In Texas, a large crowd gathered in front of a federal courthouse in downtown Austin. People took to a microphone to tell stories, many of fear and frustration. Some carried signs, including one that said "Pro-life is a lie, they don't care if we die."

In Washington, DC, an abortion rights activist climbed to the top of the Frederick Douglass Memorial Bridge, which was subsequently shut down. Guido Reichstadter posted videos and photos of himself on social media from the top of the bridge, where he unfurled a large green banner. Green is recognized as a symbol of abortion rights.

Reichstadter also planted a flag on the bridge that read "Don't tread on my uterus."

He told CNN while many people in the US oppose the Supreme Court's decision, their support is largely passive, which he says is not enough to ensure women have access to abortions across the country.