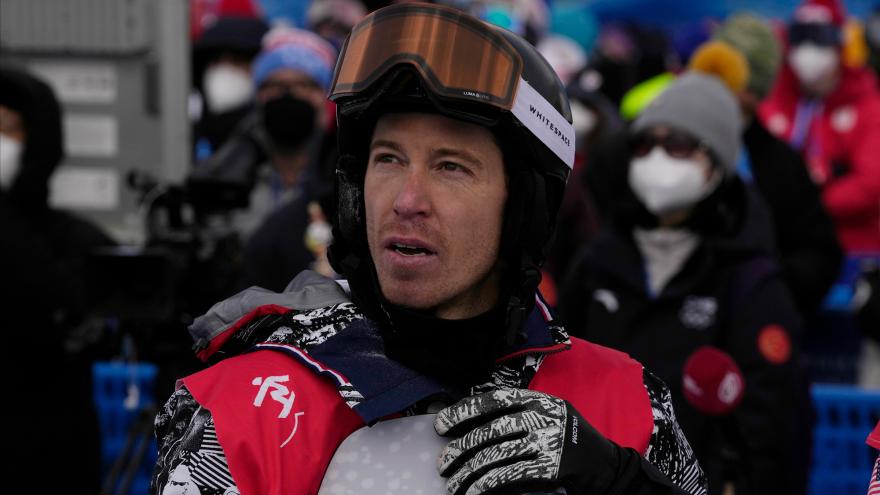 White, a three-time Olympic gold medalist and snowboarding icon, appeared emotional after crashing out of his final run at Friday's event at Genting Snow Park in Zhangjiakou.

White, who just missed the podium for a fourth-place finish, nailed a frontside 1440 to open, but couldn't land his next trick and skated to the bottom to applause from everyone in the crowd -- fans, officials, journalists, other athletes, teams, and volunteers.

"A lot of emotions are hitting me right now, the cheering from the crowd, some kind words from my fellow competitors at the bottom, I'm so happy," said the 35-year-old after the event, which he last week announced would be the last of his illustrious career.

"Snowboarding, thank you. It's been the love of my life...It's been a journey. I can't wait to see where this sport goes," he said.

The star, who has dominated the sport for two decades, was up against a formidable field of younger contenders. Two-time silver-medalist Ayumu Hirano, 23, took gold for Japan, Australia's Scotty James, 27, won silver and Swiss Jan Scherrer, also 27, went home with bronze.

"To get this bonus round, to be here, see these young guys competing, it's been such an enjoyable process and truly thankful to be here and still competing and even getting fourth. I'm proud of it," White said.

The event was stacked with impressive moments. Japan's Hirano nailed not one but two triple cork 1440s -- an immensely difficult and technical trick that had never before been landed in Olympic history.

He narrowly beat Australia's Scotty James, who also performed well on his final of three runs -- but he lost some speed, placing him in a solid silver position.

Hirano's younger brother, 19-year-old Kaishu Hirano, was also competing in the halfpipe finals. Though he crashed out in the last run, he also pulled off an incredible jump that launched him several meters into the air, to roaring applause from the crowd.

White had been under intense pressure after coming in fourth at the qualifying event earlier this week -- and he said he was having some difficulty with his back leg during his runs.

"Just missed the podium, I would have loved to walk out there with everyone, for one last time but you can't always get what you want, you get what you need," said White, quoting the Rolling Stones. "Maybe it was the pressure, maybe it was just exhaustion."

But he still pulled off a performance that saw him land every trick in his second run, fleetingly vaulting him into the silver medal position.

He also showed off his signature trick, the Tomahawk -- also known as the Double McTwist 1260 -- which he unveiled during his victory lap at the 2010 Vancouver Games.

The 35-year-old, once dubbed the "Flying Tomato" because of his flowing red hair, last week said a spate of injuries influenced his decision to retire after the Beijing Games.

That makes this Beijing halfpipe event the final Olympic run for White, who has also racked up 13 titles at the Winter X Games and along the way became a household name and icon of his sport.

"The future for me is so exciting, there's so much I want to do in my life," White said. "So much to do, so much to live for, this is just the beginning for me."