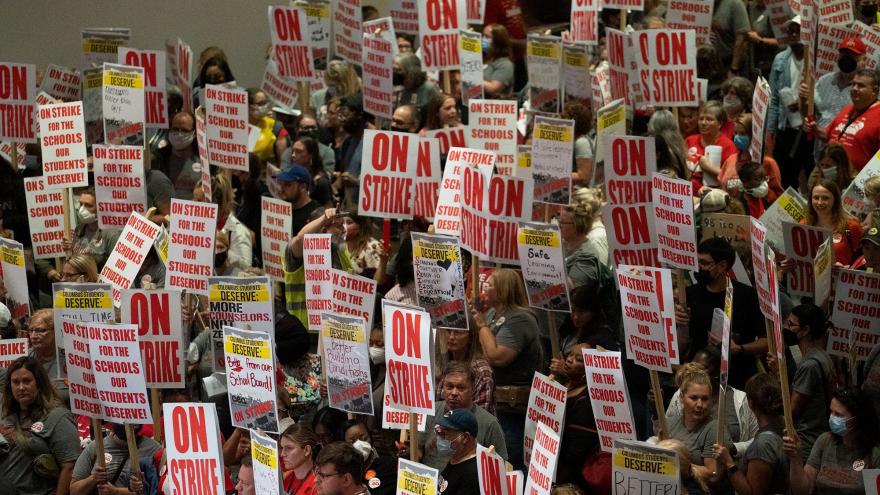 (CNN) -- Teachers at Ohio's largest school district voted to go on strike Sunday, just days before school is scheduled to start, according to the teachers' union.

The Columbus Education Association union -- which represents over 4,000 teachers, nurses and other education professionals at the Columbus City Schools district -- said it will be its first strike in decades.

"94% of Columbus Education Association (CEA) members voted to reject the (school) Board's last, best and final offer and go on strike for the first time since 1975," the union said in a statement on Twitter. "CEA is committed to bargaining for the safe and welcoming, properly maintained, and fully-resourced public schools Columbus students deserve."

Is there a teacher shortage? It's complicated

The union said the disagreement is over learning conditions, including class sizes and functional heating and air conditioning in classrooms, according to Columbus Education Association's notice of intent to strike.

The Columbus Board of Education called the outcome of the vote "disappointing."

"Tonight's vote by the Columbus Education Association (CEA) is incredibly disappointing. We are saddened by the unfortunate situation our families, our community and, most importantly, our children now face," a statement from the board said.

Columbus City Schools serves 47,000 students, according to the district.

Despite the strike, the school year is still scheduled to begin Wednesday, but classes will be online and led by substitutes, according to school district's website.

The district says its own administrators may also teach online classes while the strike continues. But since teachers make up most of the district's coaching staff, sports activities may be rescheduled or canceled, according to the website.

The strike at Columbus City Schools isn't the only one happening this week.

Just a day before the vote in Ohio, a union representing about 2,000 School District of Philadelphia employees voted to authorize a strike -- just over one week before school is set to start.

The union in Philadelphia, 32BJ SEIU, is asking for higher wages and adequate training programs.