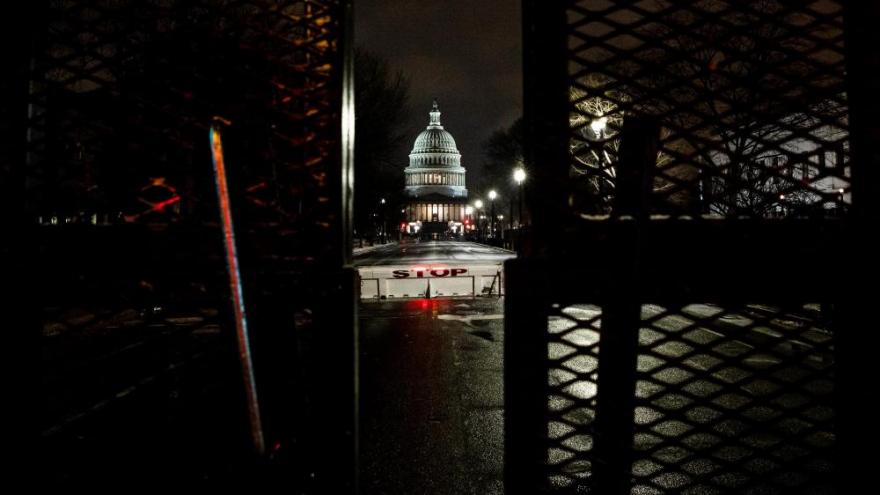 A task force established to review security at the US Capitol following the violent insurrection on January 6 is calling for mobile fencing around the complex. The U.S. Capitol building is seen past a perimeter fence on Jan. 25 in Washington, DC.

(CNN) -- A task force established to review security at the US Capitol following the violent insurrection on January 6 is calling for mobile fencing around the complex, a quick reaction Capitol Police force on standby when Congress is in session and an overhaul of how members are protected in their home districts, according to an executive copy of the report obtained by CNN.

"The breach of the U.S. Capitol on January 6 brought into stark relief the need to immediately improve the security of the Capitol Complex and the security of Congressional Members and staff," the report, which was first reported by The New York Times, reads.

CNN first reported last week that two sources said a draft copy of the review recommended adding more than 1,000 US Capitol Police officers, establishing a dedicated quick reaction force and building an integrated system of walls and fences around the Capitol complex. CNN reported on Thursday that Honoré had briefed senior members of Congress on the review, and Rep. Tim Ryan, an Ohio Democrat, said that he believes Honoré is "hitting the nail on the head" with his recommendations.

"It's going to take some time to get all this implemented but it was spot on as far as I could tell," Ryan added.

The copy of the report CNN viewed on Friday showed that the task force suggests the creation of two different new fencing systems -- a mobile system, which they argue should be "easily erected and deconstructed," and a retractable fencing system -- that would keep the border of the Capitol secure in a more manageable way. In their executive summary, the task force writes that the current, temporary fencing requires too many personnel to monitor and makes the Capitol complex less accessible.

A mobile fencing system, however, "could enable an open campus while giving security forces better options to protect the complex," the report states.

In addition to installing a permanent, retractable fencing system, the task force also recommends "a fully integrated system of obstacles, cameras, sensors, and alarms" to better integrate the security infrastructure, which they argue should work in tandem with the proposed mobile system.

Addressing the host of communication issues Capitol Police faced during the insurrection, the task force recommends that the Capitol Police chief no longer require approval from the department's board to request assistance from external agencies or the National Guard in an emergency.

This move seeks to eliminate a key breakdown in communication that happened on January 6: then-Capitol Police Chief Steve Sund has testified since the attack that he requested the National Guard through an emergency declaration, but members of the Capitol Police board say either that request never happened or was never formal. The report also calls on the department to consider using horses to create a mounted unit, adding more explosive detection dogs, purchasing earpieces to make it easier to communicate, and wearing body cameras for accountability.

The task force also addresses how Capitol Police need standardized procedures for working with outside law enforcement, specifically those in Maryland and Virginia, to make the integration and cooperation between outside forces and the Capitol Police workforce run more smoothly. On the training front specifically, the task force advises that intelligence analysts be better equipped and incorporated into the department, calling out how "fewer than a handful of people in the USCP have significant intelligence training."

A whole host of changes should be made to member security, based on the task force's findings.

Honoré's team suggests the House Sergeant at Arms establish a plan to contract security systems for all district offices, as well as provide sufficient funds for members to address residential security. This request requires a significant increase in funds because members currently have to use personal resources and campaign funds to procure security enhancements for their homes.

For travel, the task force suggests the creation of a "modestly staffed, technology-enabled travel operations center" to improve the current system, which the task force says is not efficient and labor intensive.

"In the coming days, against the backdrop of inquiry and investigation, Congress will engage in spirited debate over the Capitol's current security arrangements and the change necessary to better secure the Capitol and safeguard its Members, staff and employees," the executive summary concludes.

In order to produce their report, the task force met with representatives from Capitol Police, the House and Senate Sergeants at Arms, the Architect of the Capitol, DC Mayor Muriel Bowser, the Metropolitan Police Department, the Metropolitan Washington Council of Governments, federal law enforcement partners, the Departments of Defense and the Army, the Pentagon Force Protection Agency, the National Guard Bureau and congressional members and staff from both the House and Senate.