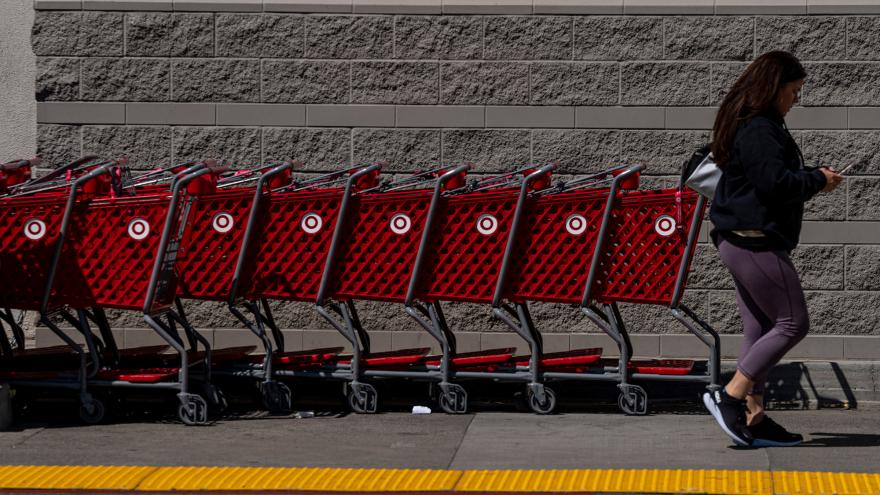 (CNN) -- Target's earnings didn't hit the mark. Far from it.

The retail giant reported a stunning 52% drop in profit for the first quarter, badly missing Wall Street's forecasts. The company blamed higher expenses due to continued supply chain disruptions. Consumers also are holding back on nonessential purchases because of rampant inflation.

Shares of Target plunged 25% Wednesday, its worst day since 1987.

Target's bad news dragged down the broader market as well. The Dow fell more than 1,160 points, or 3.6%. The S&P 500 was down 4%. Retailers Dollar Tree, Dollar General, Tractor Supply, Costco and Best Buy were among the biggest losers in the index.

Target's earnings surprise comes one day after rival Walmart's stock had its worst day in 35 years. Walmart also posted poor earnings and a weak outlook due to rising shipping and labor expenses. Walmart fell another 7% Wednesday.

"We faced unexpectedly high costs, driven by a number of factors, resulting in profitability that came in well below our expectations, and well below where we expect to operate over time," said Target CEO Brian Cornell in the earnings press release Wednesday.

It appears that Target shoppers are still spending on daily essentials, such as food and beverages and beauty products. Target said overall sales for the company were up 4% from a year ago, topping analysts' estimates.

As prices soar, consumers aren't splurging on bigger-ticket items, such as televisions and exercise equipment. The company noted that there were "lower-than-expected sales in discretionary categories," and Target was forced to write down the value of excess inventory that's stuck in warehouses.

Target shoppers are concerned about "the high and persistent inflation they've been experiencing, particularly in food and energy," Cornell added during a conference call with analysts.

Inflation is a significant problem for many retailers. T.J. Maxx and Marshalls owner TJX reported sales that were below estimates Wednesday. TJX also lowered its revenue outlook.

The continued problems in the supply chain are hurting retail profits. Target, like many other retailers, has needed to boost hourly pay to attract workers. The company said higher compensation costs for employees in its stores and distribution centers put a dent into earnings.

Big retail chains are also grappling with the fact that last year's earnings were boosted by federal stimulus checks from the government, a phenomenon that has largely disappeared in 2022.

"We view the result as disappointing...and against a backdrop of heightened costs and weakening discretionary spending, especially lapping 2021 stimulus," said Stifel analyst Mark Astrachan in a report Wednesday morning.

Cornell said during the earnings call that "while we anticipated a post-stimulus slowdown...we didn't anticipate the magnitude of that shift."

Some retailers are holding up better, though. Home Depot reported strong sales Tuesday thanks to the continued boom in housing. Rival Lowe's also posted earnings that beat estimates on Wednesday.