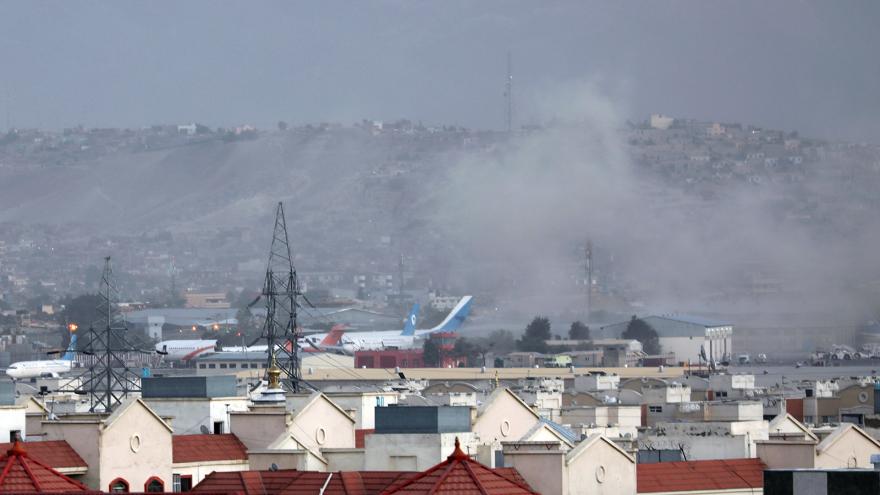 (CNN) -- The United States carried out a defensive airstrike in the Afghan capital, Kabul, targeting a suspected ISIS-K car bomb that posed an "imminent" threat to the airport, US Central Command said Sunday.

US forces have been racing to complete their evacuation operation before Tuesday's deadline and under the threat of a new terror attack on Hamid Karzai International Airport in Kabul.

A suicide bombing outside the airport gates on Thursday killed 13 US service members and at least 170 others.

Sunday's drone strike is the second by US forces targeted the ISIS-K terror group in the space of three days.

"We are confident we successfully hit the target. Significant secondary explosions from the vehicle indicated the presence of a substantial amount of explosive material."

A Pentagon official told CNN that this was a drone strike on a vehicle containing what they believe were multiple suicide bombers.

Urban said the US military was "assessing the possibilities of civilian casualties, though we have no indications at this time" and would remain vigilant against potential future threats.

Neighbors and witnesses at the scene of the strike in Kabul told CNN that several people were killed, including children.

US President Joe Biden said Saturday that military commanders had advised that "another terrorist attack on Kabul's airport is "highly likely in the next 24-36 hours," and the US Embassy in Kabul warned all US citizens to leave the airport area immediately.

The White House said Sunday morning that about 2,900 people were evacuated from Kabul from 3 a.m. ET Saturday to 3 a.m. ET Sunday. Those evacuations were carried out by 32 US military flights and nine coalition flights.

The mission is clearly winding down, with fewer people brought out than during the same time period on preceding days.

Biden traveled to Dover Air Force Base in Delaware on Sunday to mourn with the families of the 13 US service members killed in Thursday's attack as their bodies were brought back to US soil.

ISIS in Khorasan, known as ISIS-K, has claimed that an ISIS militant carried out the suicide attack, but provided no evidence to support the claim. US officials have said the group was likely behind the bombing.

On Saturday, the Pentagon said two "high profile" ISIS targets had been killed and another injured in a US drone strike late Friday in Jalalabad, in Afghanistan's eastern Nangarhar province, in a retaliatory strike for Thursday's attack.

After a desperate, two-week effort to evacuate their citizens and Afghan allies from the country following the Taliban's seizure of power, Western governments now face the challenge of how to deal with an Islamist militant group they've spent the past two decades fighting.

French President Emmanuel Macron has said he intends, alongside the United Kingdom, to submit a resolution to an emergency session of the UN Security Council (UNSC) that would focus on the creation of a "safe zone" in Kabul for Afghans leaving the country.

"Our draft resolution aims to define, under UN protection, a safe zone in Kabul that would allow humanitarian operations to continue," Macron told French newspaper Journal du Dimanche, adding that he intends to "maintain pressure on the Taliban" in doing so. The UNSC session is due to convene Monday.

Florence, a Frenchwoman living in a suburb of Paris, believed her Afghan husband of 18 years would fly out of Kabul to safety on Thursday.

But the airport suicide bombing left him stranded in the Afghan capital. France wrapped up its evacuation mission on Friday -- leaving Florence, whose last name CNN is not using for safety reasons, terrified for her husband's fate.

Her husband is just one of potentially thousands of people still in Afghanistan who fear their lives could be in danger under Taliban rule.

For those at risk in Kabul and elsewhere, the picture appears bleak.

Florence's husband was in Afghanistan for his father's funeral and had been due to fly out on a commercial flight on August 22.

Despite having a French residency permit and being on the French foreign ministry's passenger list for evacuation, he never made it past US forces guarding the airport gates in Kabul, she said.

He is terrified at what will befall his country under Taliban rule.

"It's horrible when you go back to the same conditions than 20 years ago because when you don't know, you are just living the moment but when you know exactly who these people are, what will happen to you, it's much more terrible," she said. "One thing that touched me is when my husband said, 'I'm very happy my father is dead so he doesn't see that, to not see that anymore,' they are terrible you know, terrible."

Her husband also fears for his own safety, as being found in possession of the French documents that could give him a way out represents a massive danger in itself.

Johnson: 'We will use every lever we have'

Britain concluded its own evacuation mission from Afghanistan on Saturday, with its last remaining diplomatic staff pulled out alongside military forces.

While nearly 15,000 people were brought to safety, according to the UK ambassador to Kabul, the head of the UK's armed forces, Gen. Nick Carter, told the BBC that people eligible be brought out numbering in the "high hundreds" had been left behind.

UK Prime Minister Boris Johnson said Sunday that diplomatic recognition of the Taliban as Afghanistan's "new regime" would be dependent on the organization's actions, stressing that Britain would "engage with the Taliban not on the basis of what they say, but what they do."

"If the new regime in Kabul wants diplomatic recognition, or to unlock the billions that are currently frozen, they will have to ensure safe passage for those who wish to leave the country, to respect the rights of women and girls, and to prevent Afghanistan from, again, becoming an incubator for global terror," Johnson said.

"We will use every lever we have -- political, economic, diplomatic -- to help the people of Afghanistan and to protect our own country from harm," he added.

Johnson, whose video statement was recorded after the evacuation of Britain's last remaining military and diplomatic personnel from Kabul, described the evacuation effort as a "mission unlike anything we've seen in our lifetimes." The UK embassy will now relocate to Doha, Qatar.

"Though we would not have wished to leave in this way, we have to recognize that we came in with the United States, in defense and support of the United States," Johnson continued, adding that the UK government would increase its development assistance to Afghanistan to £286 million (about $394 million).

At the Vatican, Pope Francis said he was following the situation in Afghanistan "with great concern" as he delivered his Angelus Prayer and thanked those working to help people in need.

"I take part in the suffering of the people who cry for those they lost in the suicide attack that took place on Thursday, and for those who search for help and protection," the Pope said.

"I ask everyone to continue to assist those in need and to pray that a dialogue for solidarity brings a brotherly coexistence that will offer hope for the future of the country."

KABUL, Afghanistan (AP) — A Taliban spokesman says a U.S. military airstrike has targeted a suicide bomber in a vehicle who wanted to target the Kabul international airport amid the American evacuation there.

Zabihullah Mujahid said in a message to journalists that the strike happened Sunday. U.S. military officials could not be immediately reached for comment. The incident happened as police said a rocket struck a neighborhood just northwest of Kabul's international airport Sunday as the U.S. evacuation there winds down following the Taliban's lightning takeover of the country, killing a child.

The two strikes initially appeared to be separate incidents, though information on both remained scarce.