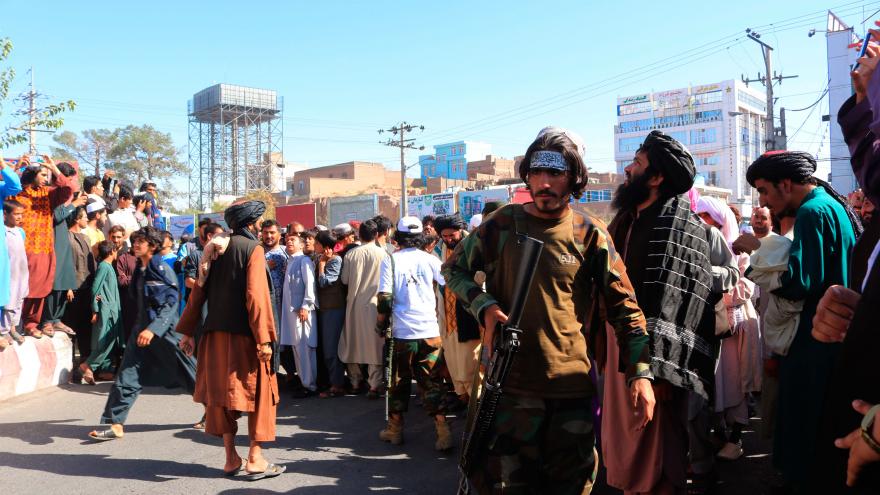 (CNN) -- The Taliban in Afghanistan have put on public display the bodies of four men who were killed after they allegedly carried out a kidnapping in the western city of Herat.

A journalist in the city told CNN that a group of four men kidnapped a merchant with his son in Herat province a few days ago.

The Taliban freed the merchant and his son and killed the kidnappers. The bodies of the kidnappers were then hanged in four different locations of Herat city on Saturday, the journalist and one other source said.

The Deputy Governor of Herat, Shir Ahmed Ummar Muhajir, also told a local journalist: "Four people were killed and one armed member of the Islamic Emirate was wounded in a clash in the 14th district of Herat."

Video and images from Herat show one man hanged from a crane in a central square. A witness told CNN a crowd gathered to view the body.

A student and activist in the city told CNN the men "were shot during the operation and then were hanged for people to take a lesson."

Earlier this month the bodies of four alleged kidnappers were dumped in a central square in Mazar-i-Sharif. They were reported to have been killed in a shoot-out with the Taliban after abducting several children.

The events follow recent reports of harsh crackdowns by the Taliban across Afghanistan that have come since they seized power of the nation in August.

While the militant group have said that their rule would be milder than it was during their previous time in government, there have been numerous reports since then that have pointed to severe violence inflicted on Afghans by the Taliban. These include the detention and assault of journalists, the use of whips against women taking part in protests and the use of gunfire and beatings to crush dissent at Kabul's largest demonstration against Taliban rule so far.

The public display of the alleged kidnappers' bodies in Herat is further evidence of the Taliban's increasingly hardline governance and the news comes in the same week that the future of democracy -- and the rights of women and girls -- under the Taliban has served as a key talking point among world leaders at the United Nations General Assembly in New York.

The Taliban requested representation at the General Assembly, as they instructed the UN on Monday to replace Ghulam Isaczai -- an appointee of Afghanistan's former democratic government -- with their own representative. A diplomatic battle has since ensued over who represents the country at the UN.

Meanwhile, the Taliban have also recently denied claims that Afghan girls and women will be banned from secondary education -- but the militant group have not yet said when they will be allowed to return to school, despite calling on boys to resume education.