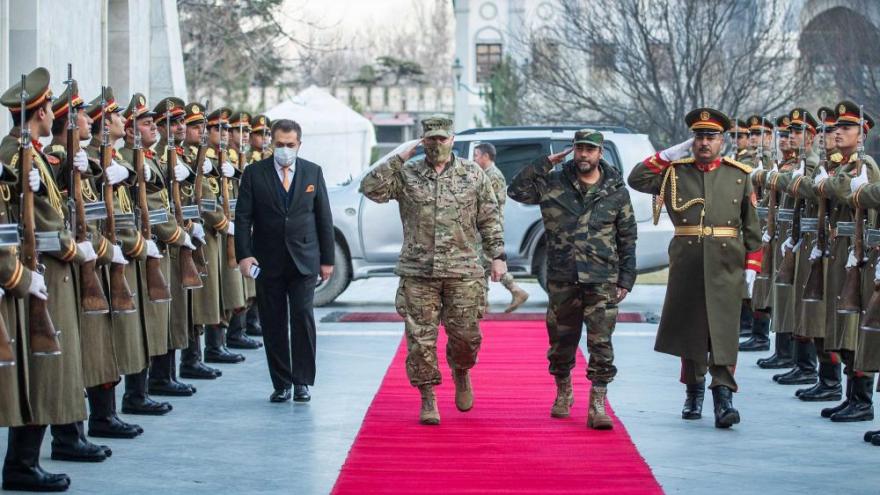 Gen. Mark A. Milley, chairman of the Joint Chiefs of Staff, is seen with Gen. Mohammad Yasin Zia, Chief of General Staff of the Afghan Armed Forces at the presidential palace prior to a meeting with Ashraf Ghani on Dec. 17, 2020.

(CNN) -- In one of the most significant attacks against US forces in Afghanistan recently, CNN has learned that the Taliban twice targeted one of the most heavily guarded bases in the country late last month and that US military personnel working for the CIA were at the installation when it came under fire.

Rockets landed near Forward Operating Base Chapman, a classified US military installation in eastern Afghanistan, and wounded seven civilians outside the base, according to a US official familiar with the details. During a second attack, a water tower was hit and a few rounds landed on the base, though no US personnel were killed or injured.

The attacks, which have not been widely reported, were followed by another in Kandahar this week, where Taliban rockets landed near a NATO air base used by US and coalition troops providing support to Afghan forces.

The flurry of violence is fueling concerns inside the Biden administration that the Taliban could step up efforts to target American forces ahead of a May 1 deadline for the US to withdraw under an agreement struck under then-President Donald Trump, sources say.

Biden himself has admitted publicly that it's unlikely the US will meet the deadline, and sources tell CNN the recent attacks underscore a growing belief among American officials that they must prepare to increasingly defend any US troops left behind, including several hundred special operations troops who at times work covertly for the CIA.

Top US officials have convened at an unusually high rate over the past month to discuss what to do in Afghanistan but have been unable to reach a consensus, multiple sources tell CNN.

During several closed-door meetings, senior leaders from "the big three" -- the CIA, the Department of Defense and the State Department -- have pushed somewhat divergent views on how the administration should move forward, according to a source familiar with the internal discussions.

The CIA, which has had a significant say in US decision-making in Afghanistan, has "staked out some clear positions" during recent deliberations, arguing in favor of continuing US involvement, the source told CNN.

Regardless of troop levels, continuing combat operations in Afghanistan "keeps alive the kind of theater CIA has used to justify continuing the norm as far as essentially doing whatever it wants in terms of operations there and is very much in their best interest organizationally," the source added.

The US wants to keep an intelligence presence in Afghanistan, two sources familiar with the matter said. When then-CIA Director Gina Haspel visited Afghanistan in 2019, discussions were already beginning over how to maintain and potentially expand the US intelligence footprint in the country. That desire has not changed, the sources said.

Some senior military commanders have also advocated keeping US troops in the country and have leaned heavily into the argument that a premature withdrawal could precipitate a collapse of the Afghan government, sources say.

Giving Biden space to make a decision he doesn't regret

Biden's advisers believe his public determination that it would be "tough" to fully withdraw by May 1 gave him some space to keep deliberating, since expectations have now been set that the deadline won't be met. In conversations with foreign counterparts, officials have pointed to his comments and acknowledged that it's no longer logistically feasible for all US troops to be out in less than a month.

There is a recognition internally this is a very tough decision for Biden because of his long-held views on winding down the war, dating back to the Obama administration. His team is hoping to provide space for him to make an informed final decision that he doesn't come to regret -- which is why there have been so many top-level meetings. There is also genuine anguish about a path forward, sources say, and Biden has made clear he doesn't want to be rushed.

The stop-and-go talks with the Taliban have made coming to a final conclusion more difficult, and the White House is wary of announcing something that either has to be revised quickly or it can't stick to. Biden also appears eager to avoid a situation where he keeps extending the withdrawal date, which has happened repeatedly over the last few years.

State Department officials welcome the Biden administration's restoration of the deliberative process for national security decisions, but there are also growing frustrations that the constant meetings are not leading to definitive decisions.

When asked about this, a senior State Department official noted there have been various meetings on Afghanistan but added that these are policy discussions around a decision that will have profound implications for the country going forward.

The lack of a consensus has led to what appear to be periodic false starts by the administration. That played out last month when State Department officials quietly reached out to lawmakers on both sides of the aisle to tell them an announcement was imminent. Weeks later, that announcement has still not come, sources said.

Secretary of State Tony Blinken has committed to consulting with Congress throughout the deliberative policy processes -- from takeoff to landing -- and the senior State Department official pointed to that commitment when asked about these conversations. The official added that consultations were not meant to signal an imminent decision.

The timing for the Biden administration's announcement on the May 1 deadline remains unclear to officials at the State Department. In some ways, not having an announcement has enabled the administration to use the deadline as a rallying call, in an effort to urge continued diplomacy and to get the Taliban to the table in Istanbul.

But the recent spate of attacks is stoking fresh concern among defense officials about the Taliban's intentions.

Protecting those left behind

Several officials now say that if Biden decides to even gradually draw down the 2,500 troops in Afghanistan he will likely have to change their mission. Those who remain will not be able to both advise and assist Afghan forces and also conduct counterterrorism missions to ensure the country does not again become a haven for violent extremists, officials say.

The US also maintains several hundred special operations troops in Afghanistan who are not publicly acknowledged, although the US widely assumes the Taliban know where they are. These troops at times work covertly for the CIA and other elements of the US intelligence community and are often used to hunt down remnants of al Qaeda and other terror targets.

The Pentagon is evaluating whether additional security measures are needed to protect US troops who may be left in Afghanistan, operating under the assumption that the Taliban will follow through on their vow to attack American forces who are still in the country after May 1.

"Unless and until there is an agreement with the Taliban, we have to assume after May 1 we will need to be prepared for attacks," a second source familiar with the situation told CNN.

Heightened security for embassy in Kabul

The State Department is also preparing for a heightened level of security around the US Embassy in Kabul, given the possibility of increased violence against US personnel in the country after May 1, two sources familiar with the discussions said.

Deputy CIA Director David Cohen, who briefly served as the agency's acting director, has been very vocal during recent interagency discussions on Afghanistan, according to the source familiar with internal discussions. This source told CNN that Cohen has weighed in more during these meetings than is traditionally expected from an acting official, advocating continued US involvement and emphasizing the importance of CIA operations in the country.

William Burns has since been confirmed as CIA director but the source said he is expected to support the same view, and would have a difficult time justifying a different opinion even if he wanted to unless the President explicitly told him to do so.

Biden has offered little indication during these recent closed-door meetings of what he will ultimately decide, though a source tells CNN that domestic reaction is not considered an overwhelming factor in the decision-making.

That is because administration officials largely agree that whatever decision is made will garner significant attention among those in the foreign policy realm but, at the end of the day, most average Americans are too consumed by issues that are having a direct impact on their lives for it to have a lasting political effect. As such, the deliberations are happening almost solely within a national security/foreign policy context.