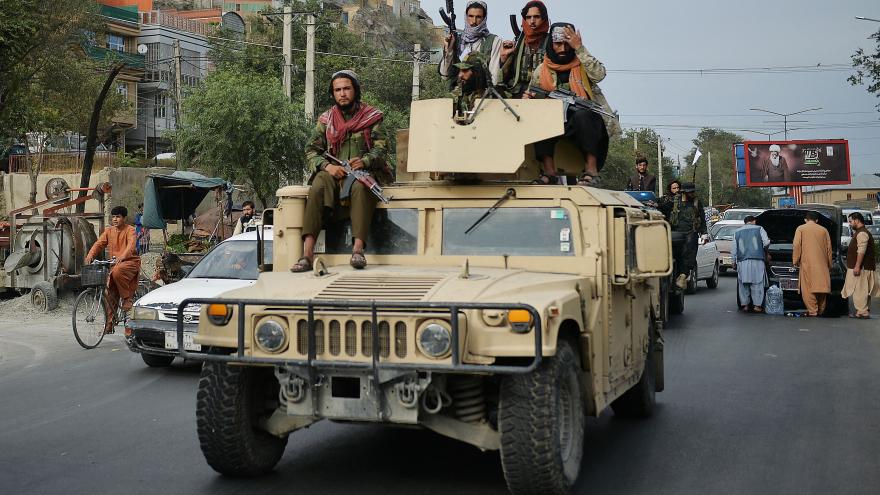 (CNN) -- The Taliban have announced the formation of a hardline interim government for Afghanistan, with key roles being shared among veterans of the militant group and their allies in the US-sanctioned Haqqani Network.

The lineup of the interim government was announced at a news conference in Kabul by one of the Taliban's spokesmen.

Mullah Mohammad Hassan Akhund, a long-time Taliban member who has been leader of the group's Shura or Leadership Council for about two decades, was named as prime minister. He is seen as an influential and respected on the religious side of the movement, rather than on its military side.

His deputy will be Mullah Baradar, the head of the Taliban's political bureau, who led the Taliban delegation in peace talks in Qatar.

Two senior figures in the Haqqani Network, a US-designated terror group aligned with the Taliban and al Qaeda, will be in in the interim government. Both have been sanctioned by the United Nations and the US.

Sirajuddin Haqqani, the network's leader, will be the acting interior minister. Haqqani has been one of two deputy leaders of the Taliban since 2016 and has a $10 million US bounty on his head. Khalil Haqqani, Sirajuddin's uncle, was appointed as acting minister for refugees. Two other members of the Haqqani clan were also named to positions in the interim government.

The announcement of key figures in the caretaker government comes weeks after the Taliban seized control of Afghanistan, and presents the first picture of how their leadership of the country will begin to take shape.

"Our government won't be based on ethnicity. We will not allow this type of politics," Taliban spokesman Zabihullah Mujahid said.

A notable omission from the government announcement was any roles within a ministry for women. Zabihullah would only say that the Taliban would be dealing with that issue.

Taliban leaders have insisted publicly that women will play a prominent role in society in Afghanistan and have access to education. But they have not been involved in talks over forming a government. In recent weeks, the Taliban has signaled women should stay at home, and, in some instances, militants have ordered women to leave their workplaces.

Some Afghan women have taken to the streets in Kabul and provincial capitals, risking their safety in protests to demand equal rights under Taliban rule and full participation in political life.

In response to questions about the Taliban's handling of protests, Zabihullah said that illegal demonstrations would not be allowed. He said protesters must observe the rules during the current emergency in the country.

He dismissed the claims by protesters about Pakistani interference in Afghanistan, saying they were rumors that had been circulated for two decades.

This is a breaking story. More to come ...