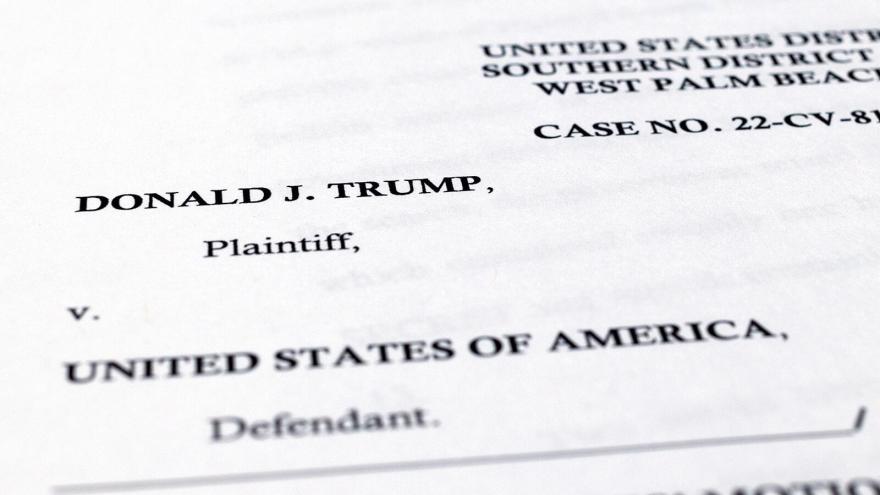 A page from the Justice Department's motion to appeal a judge's decision to name an independent arbiter to review records seized by the FBI during a search of his Mar-a-Lago estate is photographed on September, 8.

(CNN) -- The Justice Department and former President Donald Trump's lawyers faced off yet again in the Mar-a-Lago investigation, this time in a court filing late Friday where they offered vastly different proposals for how the critical special master review of seized documents should work.

Although the document Friday appeared on the court docket as a "joint response," the two sides unsurprisingly didn't agree on much.

The new filing revealed the names of the former judges and one lawyer that the respective sides proposed to serve as special master -- the third-party attorney reviewing the documents. The candidates bring some interesting experience to the table -- one co-wrote a report debunking Trump's 2020 election lies, and another was involved in the controversial surveillance of an aide for Trump's 2016 campaign.

It'll be up to US District Judge Aileen Cannon to figure out the path forward in the legal fight that could determine how far the Justice Department is able to proceed in its investigation of how White House documents ended up at Mar-a-Lago.

Here are the takeaways from Friday's court filing:

Trump's team is requesting an expansive independent review, to filter out documents that are attorney-client privileged or that fall under executive privilege.

Federal prosecutors don't want the executive privilege review to occur, and they don't want the special master to even see any of the 100-plus classified records that were seized from Mar-a-Lago.

Prosecutors also say the special master should "submit to NARA," the National Archives and Records Administration, any documents that Trump claims are covered under executive privilege, and consult with the agency "on the determination of Presidential records." (NARA previously rejected Trump's executive privilege claims for materials, including classified documents, that he eventually turned over voluntarily in January.)

Thomas Griffith, served on the prestigious DC Circuit Court of Appeals from 2005 to 2020. In one of his final major rulings before retiring, he wrote the majority opinion rejecting House Democrats' attempt to subpoena Trump's former White House Counsel Don McGahn. (The decision was later overturned.)

Since his retirement, Griffith co-authored a report alongside other prominent conservative lawyers and officials debunking Trump's lies about massive fraud in the 2020 election. He also publicly endorsed President Joe Biden's nomination of Ketanji Brown Jackson to serve on the Supreme Court.

Barbara Jones, a former federal prosecutor and a retired judge who has been a special master in several recent high-profile investigations.

She was special master to examine materials seized during an FBI raid of Rudy Giuliani's home and office in April 2021. She was also a special master in the Michael Cohen case, to make sure investigators didn't sweep up any documents that were attorney-client privileged.

From the Trump team

Paul Huck Jr., who now has his own law firm, had been a partner at the Jones Day law firm, which represented the Trump campaign in 2016.

Huck also previously served as the deputy attorney general for Florida and as general counsel to former Florida Gov. Charlie Crist -- then a Republican and now the Democratic nominee for governor in Florida.

There is one potential complication however: Chris Kise, Trump's current lawyer, also worked for Crist and overlapped with Huck.

Raymond Dearie served as a federal judge in New York since 1986. He retired in 2011 and is now a senior judge on the circuit.

Dearie also served a seven-year term on the US Foreign Intelligence Surveillance Court, or FISA court. He was one of the judges who approved an FBI and DOJ request to surveil Carter Page, a Trump campaign foreign policy adviser, as part of the federal inquiry into whether Russia interfered in the 2016 election.

How long will this review go on?

There are a lot of documents from Mar-a-Lago to review, and Trump's team isn't in a hurry. They proposed the special master get 90 days to complete his or her work.

The Justice Department wants to move more quickly, proposing the review be finished by October 17.

Historically, Trump has not hesitated to exhaust his legal options, and we could end up seeing appeals up to the Supreme Court. Already, the Justice Department has appealed Cannon's original ruling requiring the special master.

Who gets the bill?

Someone has to pay for the special master's time and resources, and nobody's offering to pick up the full check.

The Justice Department lawyers told Cannon that they think Trump should pay for the whole thing because he's the one who is "requesting the special master."

Trump's lawyers propose that the costs incurred by the Mar-a-Lago special master should be "split evenly" between him and the US government.

Trump's team said that the Justice Department "wrongly assumes" that documents are classified forever if they have classification markings.

More than 100 documents with classification markings were seized from Mar-a-Lago during the FBI's search in early August.

"Their stance wrongly assumes that if a document has a classification marking, it remains classified in perpetuity," the filing says, explaining Trump's position on the matter.

Their comment raises the specter that some of the materials seized from Mar-a-Lago might have been declassified, even though the documents have classification markings on them.

Trump and his allies have publicly claimed that he issued a blanket order declassifying many of the materials in question. CNN has previously reported that 18 ex-Trump officials believe the claim is false, and Trump's lawyers haven't made this assertion in court, where there are legal consequences for lying.

Cannon has some tough decisions to make, with the whole country watching.

In her original ruling on Labor Day, she indicated she would act quickly, but there's no official deadline at the moment.

Meanwhile, the Justice Department is appealing her original ruling to the 11th US Circuit Court of Appeals. At the same time, DOJ asked Cannon to revisit her ruling and let it continue to look at the seized documents for both criminal investigation and intelligence review purposes. Cannon has asked for Trump to respond by Monday at 10 a.m. ET.