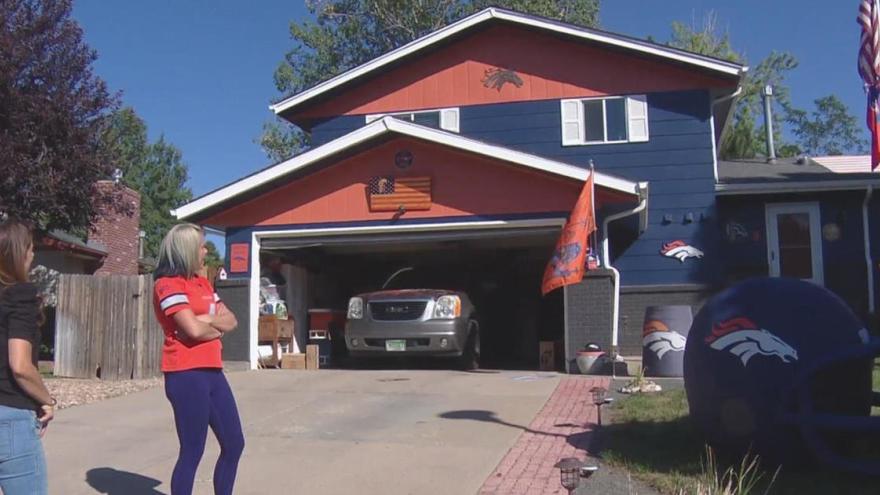 WINDSOR, Colorado (KCNC) -- The Denver Broncos first home game is sure to see a lot of diehard fans in orange and blue. But one fan really sticks out from the rest.

Danielle Pursley has been a Broncos fan since birth and makes sure everyone in her neighborhood knows. She's lived in her house in Windsor for 15 years and when it needed a new paint job, she jumped at the chance to paint it her favorite colors.

"I said well if I'm going to paint the house I might as well paint it the color I want -- which was orange and blue," Pursley said. "Some families have certain trips they do and certain things. Ours was the Broncos."

The inside of her house is even more impressive than the outside. Pursley's walls are packed with posters, footballs, hats, even Broncos themed cereal boxes. She thinks she has at least 10,000 pieces of Broncos memorabilia and some are stored since she has no room to hang it up.

"A lot of this stuff my parents started collecting for me before I was born," Pursley said.

It's not just her house showcasing her love for the Broncos. Pursley has more than seven Broncos tattoos. One of her favorites is a nod to John Elway reading "Fall Down Six Times Stand Up Seven."

More permanent than her tattoos are her kids' names. Her eldest is named Braxton -- after former Broncos safety Tyrone Braxton. Her twins are named Marshall Von and Von Miller and Mileigh. If you add an 'H", you guessed it, it spells Mile High.

"It took a lot of convincing of their dad to let me name them that, but I was big and angry and he finally just said you know what...fine," Pursley said.

Every home game she makes the 50 mile drive to Denver, not as Danielle, but as her alter ego "Crush." A costume and persona that has been years in the making.

"I can't go anywhere without people knowing it's me," she said.

And anyone who knows her knows if the Broncos lose to give her a day to recover.

"Give me snacks and call me on Tuesday," she said. "I wear black and that's when you know I'm in a bad mood. Just don't talk to me."