Tahoe, Reno areas have worst air quality in country due to smoke, raising concerns about a Covid surge 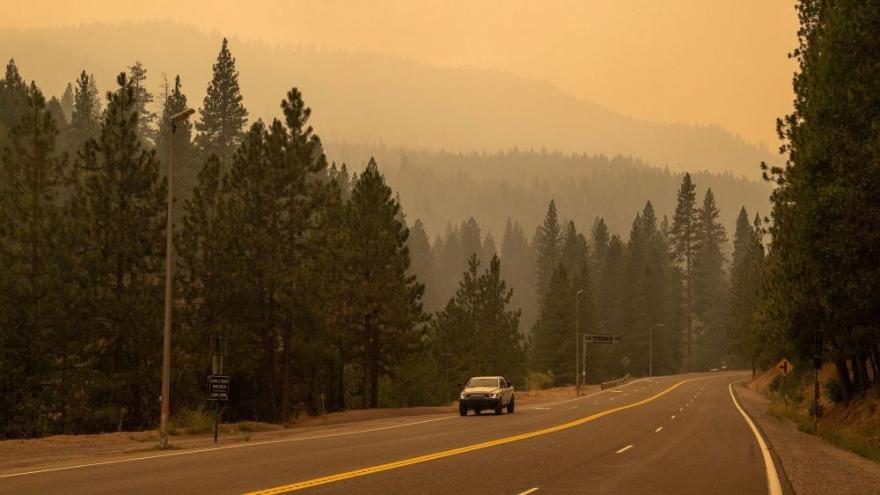 Smoke from the Caldor Fire hangs heavy in the air in El Dorado County, California, on August 18.

(CNN) -- The air around Lake Tahoe in California and Reno, Nevada, is thick with brown smoke this week, and the region is experiencing the worst air quality in the country by far, as the Caldor Fire torches its way through the El Dorado National Forest.

The wildfire smoke alone would be enough to trigger a health emergency, but combined with the spread of the coronavirus, health experts are concerned the region downwind from the Caldor Fire could be thrust into a crisis.

The Air Quality Index, a measure of how unhealthy the air is, spiked to an astonishing 694 in Tahoe City on Monday, according to AirNow.gov. In Reno on Tuesday, the AQI hit 453. An AQI between 300 and 500 is considered "a health warning of emergency conditions" in which even healthy individuals are at risk for respiratory illness. AQI below 50 indicates the air is healthy and poses little to no risk, even to individuals with respiratory disease.

The index has been around or above 300 in the Tahoe and Reno areas every day since Friday.

"For those of you wondering if the air quality yesterday was the worst ever in the Reno/Sparks area ... the answer is an unfortunate yes," the National Weather Service in Reno tweeted Monday.

Researchers have found recently that wildfire smoke has a significant impact on the severity of coronavirus cases. A study published this month in the journal Science Advances found that airborne particulate matter from wildfire smoke in 2020 led to a surge in Covid-19 cases and deaths in California, Oregon and Washington.

"What's happening in Lake Tahoe and in Reno is very concerning," Francesca Dominici, a researcher at Harvard T.H. Chan School of Public Health and co-author on the wildfire smoke study, told CNN, "because we know that exposure to a high level of fine particulate matter can amplify the negative effect of the pandemic."

Kevin Dick, the District Health Officer for Washoe County, told CNN that while smoke does have an impact on cases and hospitalizations, it's hard to attribute recent upticks to wildfires, given 40% of the community remains unvaccinated and the highly contagious Delta variant makes up 90% of its cases.

"We do know that when high concentrations of smoke are in the air, the more susceptible people are to Covid-19," Dick said.

Dominici said she expects to see a rise in hospital admissions for respiratory diseases, including some that are not associated with Covid-19, in the next few weeks, even after the wildfire smoke subsides.

Fine particulate matter, or PM 2.5, is among tiniest yet also the most dangerous pollutants, and it's one of the main components of wildfire smoke, according to the Environmental Protection Agency. When inhaled, it can travel deep into lung tissue and enter the bloodstream, and it is linked to a number of health complications: asthma, heart disease, chronic bronchitis, and other respiratory illnesses — all underlying conditions that make people vulnerable to severe outcomes from Covid-19.

Vaccination is key to preventing the most severe outcomes of Covid-19, according to Dominici, who noted the study only accounted for unvaccinated people at a time when the more contagious Delta variant hadn't yet emerged. And, given that more than a third of Washoe County's population remain unvaccinated, she said the surge in pollution from wildfire smoke can be even more detrimental to public health.

"Fine particulate matter air pollution can be an additional vehicle for spreading the virus even faster," Dominici said "Considering that we are seeing an increased risk of cases from the Delta [variant] and we already have the wildfires, that's going to be concerning."

Dr. Albert Rizzo, chief medical officer at the American Lung Association, who was not involved in the study, said that air pollution from wildfire smoke is likely causing inflammation in the lungs.

"The particulate matter is what leads the airways to be a very fertile ground for uninvited infection like the Covid virus to get into our airway," Rizzo told CNN. "The immune system is only geared up to try to fight the effects of a particulate matter and now it has a virus that it has to trigger against as well."

It's a dangerous combination, Dominici said. "Right now, considering that we are seeing an increase in risks and cases due to the Delta variant, and we're already getting wildfires, that's going to be concerning," she added.

"Even without Covid, we've been concerned that climate change that leads to hotter environments, and droughts, is fodder for wildfires to occur," Rizzo said "Then you add the wildfire ash and soot to the air quality, it does make respiratory issues much more likely to occur."

Certain communities are also at higher risk from exposure to wildfire smoke, including people with heart or lung disease, the elderly, the houseless, children and babies.

The Washoe County School District shuttered all schools including those in Reno, Sparks and parts of Lake Tahoe on Monday due to the hazardous air quality. In a separate study published in April, Benmarhnia and his colleagues found that wildfire smoke is sending children ages 19 and younger to emergency rooms with respiratory problems at higher rates than ever before.

"Kids inhale way more air than us, and their respiratory system is still being developed," he said. "So they're way more vulnerable than adults and it could be a very dangerous situation."

As the wildfire smoke wafts across the region, Dominici said it's important for people in the affected areas to get vaccinated if they haven't already.

"If they're not vaccinated, especially for people that have existing respiratory disease and asthma or are smokers, they really need to get vaccinated as soon as possible, and to avoid exposure to fine particular matter by staying indoors with closed windows," she said.