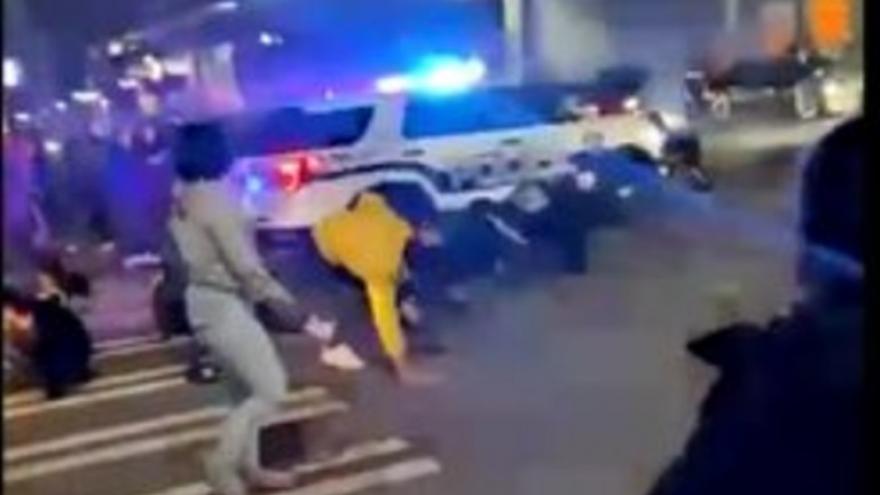 A Tacoma, Washington, police officer is under investigation after he drove his vehicle into a crowd.

(CNN) -- A Tacoma, Washington, police officer is under investigation after he drove his vehicle into a crowd, running over at least one person and possibly striking others, according to a press release from the Tacoma Police Department.

Along with other police units, the officer was responding to reports of an incident at the intersection of South 9th and Pacific Avenue in Tacoma around 6:20 p.m. on Saturday, the release said. Once on scene, the officers found a number of vehicles and approximately 100 people blocking the intersection, which they began to clear "for the safety of those gathered and people trying to use the street," the release said.

The crowd then surrounded one of the police vehicles and began hitting the vehicle and its windows while its lights and sirens were activated, according to police. The officer inside the SUV tried to back up, according to the statement, but was not able to because of the crowd.

"Fearing for his safety," the statement said, "the officer drove forward striking one individual and may have impacted others," while trying to get out of the "unsafe position." Once the officer was "at a point of safety," police say he called for medical aid.

The officer was not identified in the police statement.

The Pierce County Force Investigation Team is investigating the incident, the statement said.

In a statement issued later on Sunday, the department said the officer had been placed on administrative leave.

"The patrol officer involved in this incident is a 58-year-old male who has been a member of the Tacoma Police Department for 29.5 years," the statement said. "The officer was placed on paid administrative leave per department policy on the evening of January 23 immediately following the incident."

According to reporting from The News Tribune, Tacoma police spokesperson Wendy Haddow said the crowd was pounding on the windows of the officer's vehicle. "He was afraid they would break his glass," she said, prompting him to speed away from the scene.

One person, whose condition is unknown, was taken to a local hospital following the incident, according to police. Haddow told The New Tribune one person sustained a laceration in the collision and was transported to a local hospital, the paper reported.

In at least one graphic video of the incident circulating on social media, the police vehicle, with lights and sirens on, can be seen slowly moving closer to the crowd gathered in front of the vehicle. An engine is heard revving in the background and the vehicle backs up and then accelerates forward into the crowd, knocking several people to the ground.

The vehicle slows down slightly and it appears to bounce while driving over something before continuing through the intersection. The back tires of the vehicle can be seen rolling over someone laying in the street.

A second video shows a white car doing donuts in the middle of the intersection and driving off just as police arrive on the scene, moments before the police vehicle is seen driving through the crowd.

In another video, the sound of an engine revving is followed by a series of thuds and an individual exclaiming twice, "Damn, they're hitting a cop car." Moments later an engine is heard revving again and people scatter and begin to scream, "Oh my God! Oh my God!" repeatedly. A few seconds later, a smaller crowd is seen forming around what appears to be someone laying on the ground.

"I am concerned that our department is experiencing another use of deadly force incident," Tacoma interim police Chief Mike Ake said in the press release.

"I send my thoughts to anyone who was injured in tonight's event and am committed to our department's full cooperation in the independent investigation and to assess the actions of the department's response during the incident," he said.

Tacoma Mayor Victoria Woodards on Sunday said the incident was being taken very seriously "as a use of force" and called on the city manager and police chief to hold everyone involved accountable.

"While we await more information, I want the community to know that I am deeply concerned and praying for everyone who was impacted by last night's events," Woodards said in a statement. "I continue to be proud of Tacoma's long-standing reputation as a place of strong, non-violent advocacy and activism. I continue to support your right to use your voice to advocate and demonstrate peacefully during this time of heightened tension."