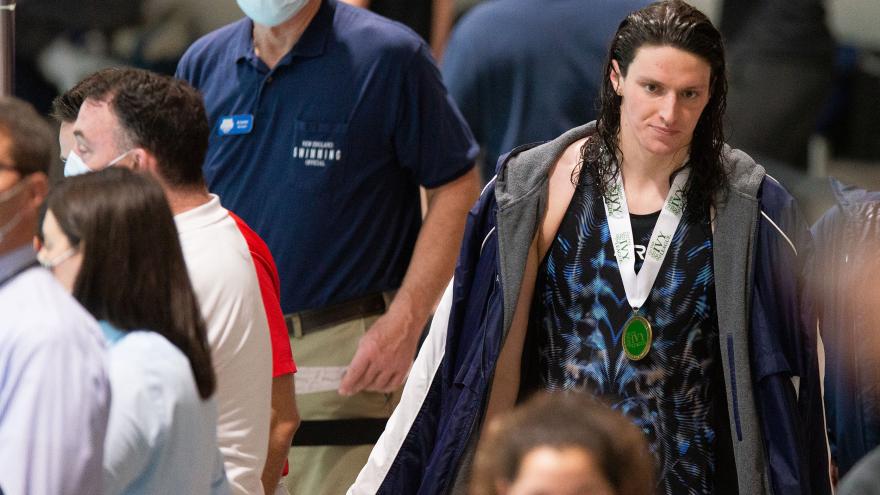 Thomas, who previously swam for the men's team at Penn, has come to personify the ongoing debate on trans women's participation in sports and the balance between inclusion and fair play.

"I try to ignore (negative comments) as much as I can. I try to focus on my swimming and what I need to do to get ready for my races and block out everything else," Thomas told ESPN after the race.

There were a few jeers from spectators in the venue, with one person yelling "cheater" as Thomas gave her interview.

"It means the world to be here," Thomas said.

Her time was the fastest of the NCAA season, but well off the NCAA record of 4:24.06, held by 10-time Olympic medalist Katie Ledecky.

Virginia freshman Emma Weyant, a silver medalist in the 400 IM at the Tokyo Olympics, was second Thursday, about 1.75 seconds behind Thomas. Texas freshman and Olympic silver medalist Erica Sullivan, who battled Thomas for the lead for much of the race, came third.

With success has come criticism about whether trans women should be allowed to compete in women's sports. Her face has been prominently displayed on Fox News and right-wing news sites critical of society's changing views on sex and gender.

Some of her Penn teammates also have taken issue with her participation. Last month, an anonymous letter written on behalf of 16 of her 40 Penn teammates criticized what they saw as her "unfair advantage," saying they supported her gender transition out of the pool but not necessarily in it.

In response, more than 300 current and former swimmers, collegiate and elite, signed their names to an open letter defending Thomas' ability to compete. One of those signees was Sullivan, her closest competitor in the 500 free prelim Thursday.

"I was fortunate enough to be welcomed with open arms in the swim community when I came out as gay," Sullivan said in a statement. "Just with my own personal good experience of coming out and feeling all that love and support within my swim community, I feel like [Lia] deserves the same thing."

What Thomas has said

Thomas previously told the SwimSwam podcast she realized she was trans the summer of 2018, but kept it secret, wary that coming out would take away her ability to swim.

"I was struggling, my mental health was not very good. It was a lot of unease, about basically just feeling trapped in my body. It didn't align," she said.

The NCAA currently requires trans women athletes to have one year of hormone replacement therapy (HRT) to be cleared to participate in women's sports. Thomas said she started HRT in May 2019 and came out as trans that fall, and the NCAA has approved her participation in the women's field.

Through an Ivy spokesperson, she declined to speak to CNN during the Ivy championships. She spoke to Sports Illustrated earlier this month to defend her ability to compete.

"The very simple answer is that I'm not a man," she said. "I'm a woman, so I belong on the women's team. Trans people deserve that same respect every other athlete gets."

The NCAA has since adopted a set of stricter guidelines that require elite trans woman athletes to have three years of HRT and to prove to a panel of medical experts that they do not have a competitive advantage over cisgender women. Those rules will be instituted in phases over the coming seasons.