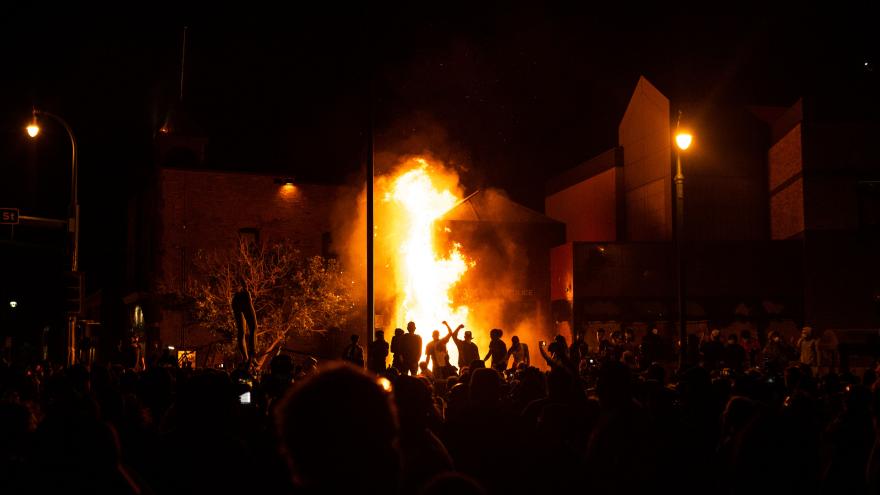 Protesters cheer as the Third Police Precinct burns behind them on May 28, 2020, in Minneapolis, Minnesota.

(CNN) -- A self-described member of the extremist anti-government movement "Boogaloo Bois" has been arrested and charged with participating in a riot, the Justice Department announced Friday.

Ivan Harrison Hunter, 26, was taken into custody on Wednesday in Texas as part of an FBI investigation into civil unrest in Minneapolis following the death of George Floyd, prosecutors said in a news release.

CNN has been unable to reach Hunter or determine whether he has legal representation.

According to a federal criminal affidavit, Hunter was present between May 27-28 at the Minneapolis Police Department's Third Precinct when the building was set on fire during protests. The FBI said it obtained video that showed Hunter firing 13 rounds from an AK-47 style rifle into the Third Precinct while people were inside the building.

After shooting at the building, the FBI said Hunter was seen on video high-fiving another person and yelling, "Justice for Floyd!"

Hunter returned to Texas after the Third Precinct incident, and "made various statements on social media describing the violence in which he engaged in Minneapolis," according to the affidavit.

In the charging documents, the FBI alleged that Hunter was also associated with Steven Carrillo — another adherent of the Boogaloo Bois movement who is charged with killing two law enforcement officers in California in late May and early June.

Both Hunter and Carrillo were in communication with each other discussing plans to attack law enforcement, according to the complaint. While Carrillo was on the run from authorities after shooting a federal agent, he allegedly wired Hunter money, the FBI said.

According to the affidavit, prior to the Third Precinct shooting, Hunter was also in communication with Michael Solomon and Benjamin Teeter -- two self-proclaimed Boogaloo Bois supporters who were charged last month with providing material support to the foreign terrorist organization Hamas.

According to a person familiar with the FBI's investigation, social media platform Facebook observed potentially threatening communications between Hunter and other suspected Boogaloo Bois members and brought them to the attention of the FBI.

Asked for details about their role in the investigation, a Facebook spokesperson declined to comment on the investigation but said, "We remove content, disable accounts and immediately report to law enforcement when there is a credible threat of imminent harm to people or public safety, which is what we did in this case. This is the approach we've used to combat this network tied to the boogaloo movement, which we designated as a dangerous organization in June."

As CNN has previously reported, the Boogaloo Bois or Boys are an emerging incarnation of extremism that seems to defy easy categorization. Boogaloo members appear to hold conflicting ideological views, with some identifying as anarchists and others rejecting formal titles. Some pockets of the group have espoused white supremacy while others reject it.