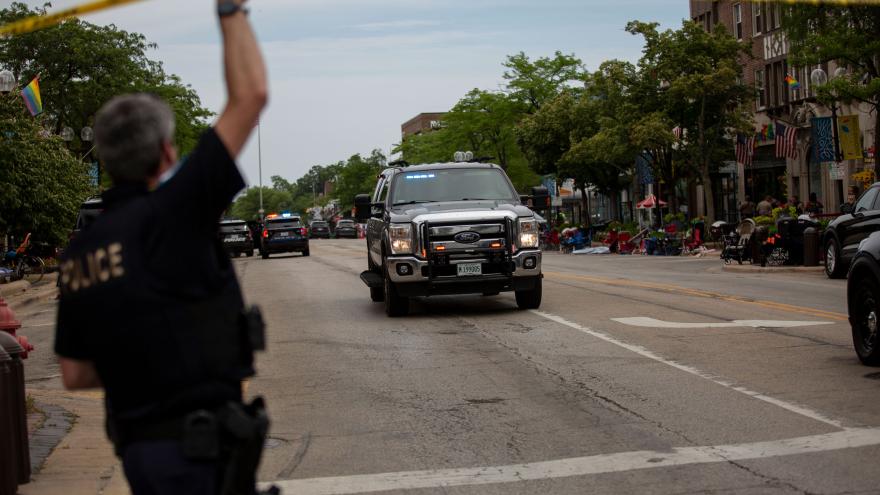 (CNN) -- Investigators believe the man accused of shooting dead seven people and injuring more than two-dozen others at a July Fourth parade in a Chicago suburb planned the attack "for several weeks," a police spokesperson said Tuesday.

The suspect, Robert E. Crimo III, 21, also is believed to have worn women's clothing during the shooting in Highland Park, to conceal his identity and his facial tattoos, and to help him leave with the crowd that was fleeing in the shooting's wake, said Christopher Covelli, spokesperson for the Lake County Major Crime Task Force.

"He blended right in with everybody else as they were running around, almost as (if) he was an innocent spectator as well," Covelli said late Tuesday morning at a news conference outside Highland Park police headquarters.

Investigators still are trying to determine a motive, Covelli said. Crimo has been in police custody since being apprehended Monday evening, though no charges have been announced.

Crimo, authorities believe, used a high-powered rifle "similar to an AR-15" to fire more than 70 rounds into a parade crowd from a business's roof, which he accessed by a fire escape's ladder, Covelli said.

Sounds of gunshots pierced the sunny parade just after 10 a.m. CT along the town's Central Avenue, about 25 miles north of Chicago, sending hundreds of attendees scattering in terror -- abandoning strollers, chairs and American-flag paraphernalia on the streets. Witnesses described watching in horror as injured people dropped around them.

Besides the seven killed, more than 30 people were injured by gunfire, Covelli said. A hospital system in the area has said at least one person from the Highland Park incident still was hospitalized Tuesday for a reason other than a gunshot wound.

The carnage punctuates an already bloody American spring and summer -- during the past 186 days, more than 300 mass shootings have happened in the US, according to data compiled by the Gun Violence Archive, a non-profit tracking such incidents.

"There are no words for the kind of evil that shows up at a public celebration of freedom, hides on a roof and shoots innocent people with an assault rifle," Illinois Gov. J.B. Pritzker said Monday. "It is devastating that a celebration of America was ripped apart by our uniquely American plague."

Details on what led investigators to believe the shooting was planned for weeks were not immediately made available.

After the shooting, Crimo went to his mother's house in the area, and then took off in his mother's car, Covelli said.

After police determined Crimo was a person of interest in the investigation and publicized his information and the car they believed he was in, someone saw the vehicle on US 41 and called 911, Covelli said.

Besides the rifle used in the shooting, which authorities found abandoned near the shooting scene, officers also found a rifle inside the vehicle, Covelli said.

Crimo, a resident of the city of Highwood, near Highland Park, had purchased both weapons legally in the Chicagoland area, Covelli said, without elaborating.

Other firearms were found in Crimo's Highwood residence, Covelli said.

Investigators have no information that the shooting was motivated by race, religion or any other protected status, Covelli said.

One of the victims killed was Jacki Sundheim, 63, according to a nearby synagogue where she was a congregant and a staff member.Another was Nicolas Toledo, 78, who had been visiting his family in Highland Park from Mexico, an official from the state of Morelos told CNN.

Thirty-nine patients relating to the shooting -- including the person who died in a hospital -- were treated at three NorthShore University HealthSystem hospitals, the system said Tuesday.

The injured ranged in age from 8 to 85 -- four or five patients were children, Dr. Brigham Temple, the system's medical director, said Monday.

Nine still were in hospitals Tuesday, ranging in age from 14 to the 70s, according to system spokesman Jim Anthony. Eight of the nine suffered gunshot wounds, Anthony said. One was in critical condition Tuesday, Anthony said.

'We're all a little shaken'

On Tuesday morning, a Highland Park street still was littered Tuesday with revelers' belongings that were abandoned in haste, and residents are struggling to come to terms with what happened.

Three blocks of Central Avenue in downtown Highland Park remained blocked by police tape. FBI agents walked in a line to comb the street for more evidence and lifted up strewn lawn chairs, and other items left behind in the flight to safety.

A man who'd fled the carnage uninjured with his sons returned Tuesday and found the wheelchair of his elder son, who has special needs. They'd abandoned the wheelchair Monday -- and the younger sibling carried his brother -- after the elder fell out as they hurried away from the shooting.

Both inside and outside the taped-off zone, belongings of parade visitors remained strewn on the ground. Among them: a baby carriage, a Dunkin Donuts iced coffee overrun by ants, a half-eaten cup of noodles, a toy truck, sunscreen, bottles of water, dog treats, and a stuffed Sonic the Hedgehog toy.

'Much more work to do'

The Highland Park attack comes after several recent mass shootings that shocked the nation, including an 18-year-old's racist attack at a New York supermarket that killed 10 and another 18-year-old's shooting at a Texas school that left 19 students and two teachers dead.

In the wake of those massacres, President Joe Biden signed into law the first major federal gun safety legislation in decades, marking a significant bipartisan breakthrough on one of the most contentious policy issues in Washington.

Biden held a brief moment of silence at the White House on Monday evening during a July Fourth picnic, noting that he'd spoken to Gov. Pritzker and Highland Park's mayor.

"There is much more work to do, and I'm not going to give up fighting the epidemic of gun violence," Biden said in a statement released Monday.

In 2013, Highland Park had passed a local ban on semi-automatic firearms with the capacity to accept more than 10 rounds of ammunition, following a series of mass shooting incidents around the country.

"I think it's important to know that our assault weapons ban ... is reflective of the values of our community," she said. "Obviously we have a problem in this country if we have weekly mass shootings involving these weapons of war, and it's important for us to talk about how to provide that protection on a boarder scale, whether it's statewide (or) whether it's nationally."

What we know about the suspect

Crimo, who calls himself "Awake the Rapper," posted online music videos on several major streaming outlets and on a personal website, with some featuring animated scenes of gun violence.

In one video titled "Are you Awake," a cartoon animation of a stick-figure shooter -- resembling Crimo's appearance -- is seen in tactical gear carrying out an attack with a rifle. Crimo is seen narrating, "I need to just do it. It is my destiny."

The suspect's uncle, Paul A. Crimo, told CNN he had spoken at length to law enforcement on Monday and described his nephew as a "lonely, quiet person."

He said he does not know of any political views held by his nephew, though he described him as active on YouTube.

His brother, who is the suspect's father, ran for mayor againstincumbent Rotering in 2019 and lost.

"I'm so heartbroken for all the families who lost their lives," Paul Crimo said.

Rotering knew the suspect, having been leader of his Cub Scout pack when he was a boy. "He was a Cub Scout in my ... pack. So, many years ago, he was just a ... quiet little boy that I knew," Rotering told CNN Tuesday.

"I don't know what got him to this point, but let's ask that question of so many people," she said.

Some bystanders initially thought the sound of gunfire was fireworks, until many fled in terror.

Eyewitnesses described grabbing their children and families and running for their lives, some hiding behind dumpsters or in nearby stores for safety amid the chaos. One paradegoer described seeing someone shot and killed, another saw a man shot in the ear with blood all over his face.

"It looked like a battle zone, and it's disgusting. It's really disgusting," Zoe Pawelczak, who attended the Independence Day parade with her father, recalled Monday.

Pawelczak, who attended the Independence Day parade with her father, said paradegoers initially thought the array of pops were fireworks given the occasion.

"And I was like, something's wrong. I grabbed my dad and started running. All of a sudden everyone behind us started running," she said. "I looked back probably 20 feet away from me. I saw a girl shot and killed."

Miles Zaremski said he heard what he believed to be about 20 to 30 gunshots, in two consecutive spurts of gunfire, at about 10:20 a.m. CT, shortly after the start of the parade. He told CNN he saw a number of people bloodied and on the ground and described the scene as chaotic.

Toback, the man who returned to find his elder son's wheelchair Tuesday, said his girlfriend also was with them and his younger son at the parade. They turned and ran after they heard the gunfire and saw a crowd running toward them.

The wheelchair collapsed and the older son fell in the rush to flee -- so they abandoned the chair and the younger son picked him up, Toback said.

"We ran for our lives," Toback said.