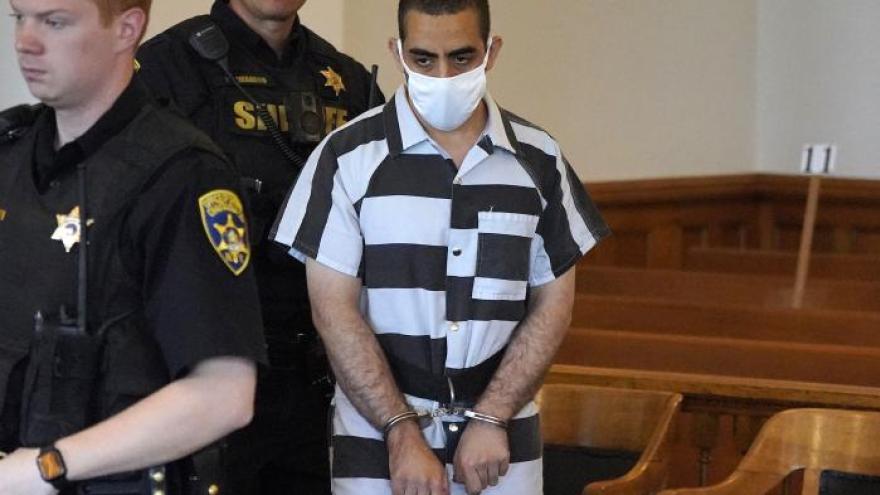 The man accused of stabbing author Salman Rushdie in New York state has been indicted by a grand jury. Hadi Matar, 24, center, is pictured in Mayville, New York, on August 13.

Hadi Matar, 24, of New Jersey, made the plea in a courtroom in Chautauqua County, New York, after prosecutors said a grand jury had indicted him this week.

A judge ordered Matar held without bail, and said he must surrender any firearms. Matar, handcuffed and wearing a mask and a striped prison uniform, spoke little, once saying "yes" to acknowledge the judge.

The attempted murder charge, which relates to the attack on Rushdie, would carry a penalty of up to 25 years in prison if the defendant is convicted, a prosecutor said in court. The assault charge, relating to the other speaker's injuries, would carry up to seven years, the prosecutor said.

Jason Schmidt, the Chautauqua district attorney, said the office will continue to look at charges and where there may be "opportunities" to upgrade. He referenced wishing he could reword a hate crimes statute noting that his office chose "for now" not to indict on a hate crimes charge.

Temporary orders of protection were also entered for the speakers that Matar allegedly attacked at the Chautauqua institution.

Rushdie -- who has received death threats for his 1988 satirical novel "The Satanic Verses," which some Muslims have considered sacrilegious -- was about to give a lecture August 12 at the Chautauqua Institution when an assailant jumped on stage and stabbed him repeatedly.

Another speaker at the event, Ralph Henry Reese, was injured in the attack, police said. He was taken to a hospital by ambulance and later released with a facial injury.

As of Monday, Rushdie was hospitalized but awake and "articulate" in his conversations with investigators, a law enforcement official with direct knowledge of the investigation told CNN.

Authorities have not released a motive for the attack.

A grand jury indicted Matar on the charges, the county prosecutor's office and his defense attorney said earlier Thursday. Matar had pleaded not guilty to initial charges last weekend.

Schmidt said, "It's been a sprint through grand jury but now its going to be more like a marathon."

The judge placed a temporary gag order on the attorneys. The defense has filed a request for a gag order that Defense attorney Nathaniel Barone said he believed will be heard at a later date, likely next week. "We've got a ton of pre-trial publicity so we don't want to taint any prospective juror more than its already been done in this county," Barone said after court Thursday.

Barone said there is a discovery conference September 7, 2022.

Schmidt described the discovery as "voluminous."

"We're going to try our best to be transparent as possible about the process," he said, adding his office is working closely with New York state police and other law enforcement entities.

On the morning of August 12, Matar jumped onto the stage at the Chautauqua Institution, about 70 miles southwest of Buffalo, New York, and lunged toward Rushdie, repeatedly stabbing him, according to New York State Police. The suspect was held down by audience members and staff who forced him to the ground until he was arrested by a state trooper.

In court Thursday, a prosecutor said Matar multiple knives when he traveled to Chautauqua, in addition to false identification, cash and prepaid Visa cards.

Officials believe Matar, who lived in Fairview, New Jersey, traveled to Buffalo via bus and used a ride-sharing app to reach Chautauqua the day before the attack, according to a law enforcement official with knowledge of the investigation who spoke to CNN this week.

Investigators did not immediately know where Matar spent the night, the official added. Matar had a fake driver's license, some cash, two Visa prepaid gift cards and no wallet when he was arrested, the official said.

Matar's mother told the Daily Mail for a story published this week her son was outgoing and raised in the United States. But after taking a monthlong trip to the Middle East in 2018, Matar returned as a "moody introvert," his mother, Silvana Fardos, said.

Fardos didn't learn about the stabbing attack until the FBI raided her home in Fairview, New Jersey, she told the Daily Mail.

A religious decree for Rushdie's death

Rushdie had lived in hiding after "The Satanic Verses" was published. The late Iranian leader Ayatollah Ruhollah Khomeini described the book as an insult to Islam and the faith's Prophet Mohammed. He issued a religious decree, or fatwa, calling for Rushdie's death in 1989.

In 1998, the Iranian government tried to distance itself from the fatwa by pledging not to seek to carry it out. Despite that, Iran's Supreme Leader Ayatollah Ali Khamenei reaffirmed the religious edict.

In February 2017, on Khamenei's official website, the supreme leader was asked if the "fatwa against Rushdie was still in effect." Khamenei confirmed it was, saying, "The decree is as Imam Khomeini issued."

On Monday, the Iranian government denied ties to the stabbing attack.

"We categorically and seriously deny any connection of the assailant with Iran," Iranian Foreign Ministry spokesman Nasser Kanaani said.

"We do not consider anyone other than (Rushdie) and his supporters worth of blame and even condemnation."

The US State Department denounced Iran's stance, calling the comments "despicable" and "disgusting."

"It is no secret that the Iranian regime has been central to the threats against his life over the course of years now," State Department spokesperson Ned Price said.

He called Iran's "gloating" over the attack "absolutely outrageous."

"We want it to be very clear that it is not something that we can tolerate," Price said.

Rushdie began living under British protection after Iran issued the fatwa calling for his death.

On Monday, UK Prime Minister Boris Johnson said he was shocked by the attack on Rushdie, who is also a British citizen.

"Appalled that Sir Salman Rushdie has been stabbed while exercising a right we should never cease to defend," Johnson tweeted. "Right now my thoughts are with his loved ones."