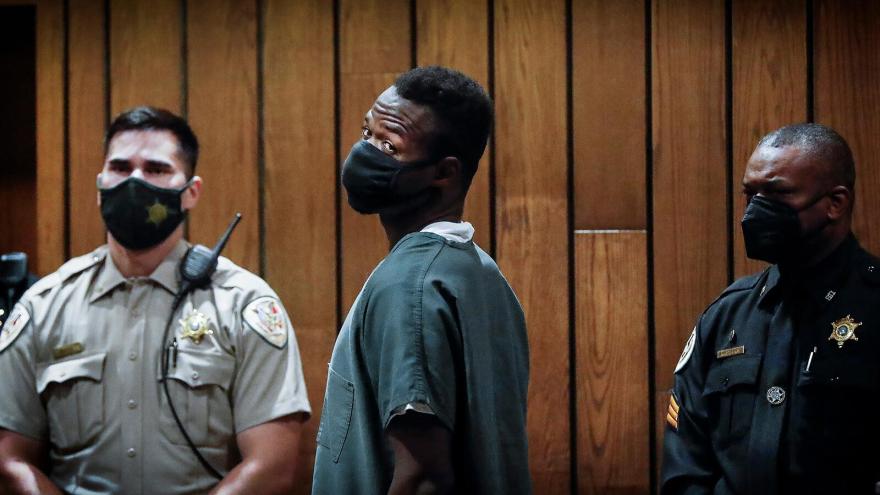 (CNN) -- The man accused of kidnapping and murdering a Tennessee teacher appeared in court Thursday in a city stunned by another deadly attack.

Cleotha Henderson, 38, faces multiple charges in the killing of Eliza "Liza" Fletcher, 34, who disappeared after she went jogging in Memphis early Friday morning.

Henderson allegedly passed by Fletcher in an SUV while she was jogging in a neighborhood near the University of Memphis.

Authorities say Henderson got out of the vehicle and chased Fletcher until he forced her into the passenger seat around 4 a.m. Friday. After a dayslong, intensive search, Fletcher's body was found Monday behind a vacant duplex.

Henderson appeared in a Shelby County court Thursday after he filed a motion for a change of attorney because of an alleged conflict of interest.

The Shelby County Public Defender's Office, which was appointed to Henderson's case this week, had previously represented him in a kidnapping conviction more than 20 years ago, Judge Louis J. Montesi Jr. said.

Montesi said Henderson's prior attorney would not be involved in his current case but ruled there were no "grounds or basis for the public defender to be disqualified as counsel."

Henderson initially faced charges of kidnapping and tampering with evidence in relation to the Fletcher case. Prosecutors later added a charge of first-degree murder in perpetration of kidnapping.

It's not clear what kind of sentencing prosecutors are planning to pursue if Henderson is convicted.

"It is premature for us to discuss right now what punishment we're going to seek," Shelby County District Attorney Steve Mulroy said Wednesday. In Tennessee, a first-degree murder conviction carries a sentence of life in prison -- with or without parole -- or the death penalty.

It's also unclear whether Henderson's prior kidnapping conviction of more than 20 years would have an impact in this case. Henderson pleaded guilty to kidnapping an attorney in 2000 and was released in 2020, the Shelby County district attorney's office told local news outlet WREG.

While Henderson was in court Thursday, another wave of shock and grief permeated Memphis.

Police say a 19-year-old man went on a shooting rampage across Memphis on Wednesday, killing four people and wounding three others.

The suspect, Ezekiel Kelly, was previously charged with criminal attempted first-degree murder but pleaded guilty in April 2021 to a lesser charge of aggravated assault.

He was sentenced to three years in prison, but only served 11 months and was released in March, Memphis Mayor Jim Strickland said.

"If Mr. Kelly served his full three-year sentence, he would still be in prison today, and four of our fellow citizens would still be alive," the mayor said.

The arrests of Kelly and Henderson in the recent Memphis killings sparked concerns about the criminal justice system and repeat offenders.

"People in Memphis and Shelby County are understandably frightened and outraged by all these events," Shelby County District Attorney Steve Mulroy said.

"I said it before, I'll say again: If you've got repeat violent offenders, they deserve a strong response. And that's what we'll get from the DA's office."

But "today is not about debating the finer details of criminal justice policy," Mulroy said after Henderson's hearing Thursday. "Today, we're dealing with a tragedy that occurred last week."

Fletcher, an avid runner, never made it home after her last predawn jog. So community members will pick up where she left off.

"Our goal is to stand up for the women in the Mid South and emphasize that women should be able to safely run any time of day," organizers wrote on Facebook.

Fletcher was a junior kindergarten teacher at St. Mary's Episcopal School in Memphis. The school faculty and staff lit candles in Fletcher's memory earlier this week.

"We are heartbroken at the loss of our beloved teacher, colleague, and friend Liza Fletcher," the school said.

The 34-year-old was also a wife and mother of two.

"Liza was a such a joy to so many -- her family, friends, colleagues, students, parents, members of her Second Presbyterian Church congregation, and everyone who knew her," Fletcher's family said in a statement obtained by CNN affiliate WHBQ.

"Now it's time to remember and celebrate how special she was and to support those who cared so much for her. We appreciate all the expressions of love and concern we have received. We are grateful beyond measure to local, state and federal law enforcement for their tireless efforts to find Liza and to bring justice to the person responsible for this horrible crime."

How the search unfolded

The search for Fletcher started last Friday when her husband reported she didn't return home from her routine morning jog, authorities said in an affidavit.

Someone had found her phone on a street that morning. The person gave the phone to one of Fletcher's relatives, who gave it to investigators, the affidavit said.

The SUV remained in a parking lot for about four minutes after both people were inside and then drove away, the affidavit states.

Police also analyzed a pair of sandals that were found at the abduction site, near the victim's phone. DNA found on the shoes matched Henderson's DNA, the affidavit reads.

Investigators interviewed Henderson's employer, who said he drove a GMC Terrain and verified his phone number. Investigators checked Henderson's cell phone records, which showed he was near the abduction scene during the time of Fletcher's kidnapping, according to the affidavit.

Members of a US Marshals task force found a GMC Terrain near Henderson's home on Saturday morning that had the same distinguishable damage seen in the surveillance footage, and the license plate matched the partial plate information gleaned from the video, the affidavit reads.

The task force detained Henderson near his home Saturday, the court document said.

Police gathered details from two witnesses -- including Henderson's brother -- who say they saw him acting strangely at the brother's Memphis house after the abduction, according to the affidavit.

Both said Henderson cleaned the interior of the GMC Terrain with floor cleaner, according to the affidavit, and that he washed his clothes in the sink of the home.