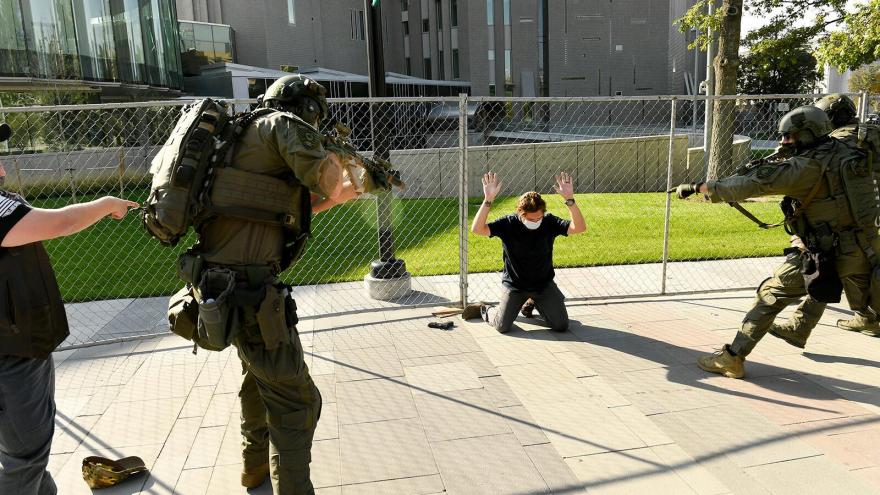 Police order Matthew Dollof to the ground after a shooting in Denver on Saturday, October 10, 2020. Dollof is being held for investigation of first-degree murder in connection with the shooting.

(CNN) -- The victim in the deadly shooting at a protest in Denver was identified Monday by the Denver Medical Examiner's Office.

Lee Keltner, 49, was pronounced dead at a Denver hospital, the Medical Examiner's Office statement said. After an autopsy, the medical examiner's office said Keltner's cause of death was from a gunshot wound and his manner of death was homicide.

He was shot in an area near a police support rally and counterprotest on Saturday. A verbal altercation occurred before the shooting and two guns and a can of Mace were recovered at the scene, Denver police Investigations Division Chief Joe Montoya said Saturday.

The man arrested Saturday in connection with Keltner's death, Matthew Dolloff, 30, is being held for investigation of first-degree murder, according to police. Dolloff is being held at the Denver Detention Center without bond, according to jail records.

Dolloff was initially identified as a private security guard who was contracted through Pinkerton by CNN affiliate KUSA-TV to accompany staff at protests, the station said in a statement.

However, Dolloff is not licensed to be a security guard in Denver, according to Eric Escudero, a spokesman for the city's Department of Excise and Licenses.

"We searched our records and there is no record for an active security guard now or ever for an individual named Matthew Doloff or Dolloff," Escudero said in response to a CNN inquiry. He said no other city agency licenses security guards.

If Dolloff was operating without a license, he could be fined up to $999 or face up to a year in jail, Escudero said. The company that hired Dolloff could also face administrative action if this were the case, according to Escudero.

"Licensed security guard employers that hire unlicensed security guards could face disciplinary actions against their licenses ranging from a fine, to suspension, to revocation. Businesses could also face criminal charges for permitting or directing an unlicensed person to perform security services," according to a statement from the Denver city attorney's office.

Escudero said that while three cities in Colorado, including Denver, require a license to operate as a security guard, there is no state license for security guards.

In a statement released Sunday, Pinkerton said Dolloff was a contractor from a third-party vendor.

"The vendor is responsible for proper licensing for all agents under their employment," the statement says. "It is the responsibility of the vendor to ensure any agents assigned to security projects have the required documentation to complete the assignment."

The Denver city attorney's statement said "there could be civil or criminal actions taken, or both, against Mr. Dolloff, Pinkerton, 9News, and/or any other entity that hired and deployed Dolloff in an unlicensed security guard capacity."

Pinkerton said it is cooperating in the investigation.

Doug Richards, an attorney speaking on behalf of Dolloff's family, told The Denver Post Dolloff was acting in self-defense when he allegedly shot and killed a man at the Saturday protest.

"I think it's important to recognize that this is somebody who is at the protest working to protect First Amendment rights. He was not there on behalf of any organization or to advance any political agenda," Richards told the Post, adding that images taken from the scene show Dolloff was putting himself between a protester and reporter.

"Matt was doing everything he was supposed to do and everything he was trained to do," Richards said. "Even if he didn't carry the special Denver security license, it didn't stop Pinkerton from sending Matt into that job and it doesn't change the fact that Matt was acting in self-defense."

Denver Mayor Michael Hancock said during a press conference on Monday that officials are reviewing the video of the incident trying to understand everything that happened.

Hancock also said during today's press conference that the "lack of credentials" for Dolloff is concerning to officials.