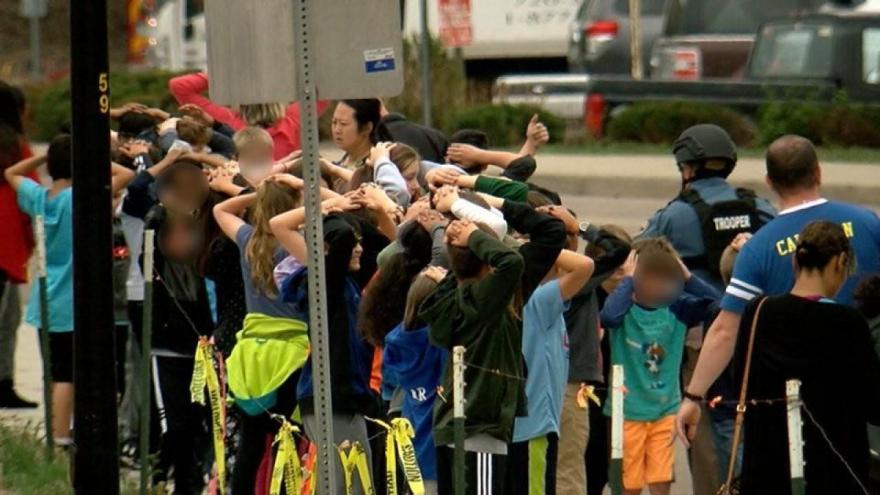 (CNN) -- A school shooting not far from Columbine High School left one student dead and eight others injured on Tuesday, authorities said.

Two suspects were apprehended after the shooting at the STEM School Highlands Ranch, which covers K-12, Douglas County Sheriff Tony Spurlock said. About 1,850 students attend the school, according to its website.

Spurlock said earlier that one suspect is an adult male and one is believed to be a juvenile.

He identified one of the suspects as Devon Erickson. Erickson, 18, is the adult suspect, the Douglas Colorado Sheriff's office said on Twitter. The department also said it will not release photos at this time to maintain the integrity of the investigation.

The suspects are believed to be students at the school, Spurlock said.

The incident rattled an area that just marked the 20th anniversary of the deadly shooting at Columbine High School, about seven miles away from the STEM school. Douglas County Schools were also closed April 17 as authorities scrambled to find an armed Florida teen they said was infatuated with the Columbine massacre. The woman, authorities said, made threats before she traveled to Colorado, where she died of a self-inflicted gunshot wound.

"Tragically, this community and those surrounding it know all too well these hateful and horrible acts of violence," the White House said in a statement.

"This is a terrible event," Spurlock said. "This is something that no one wants to have happen in their community."

The shooting started in the high school just before 2 p.m., authorities said. The suspects walked into the school, and "got deep inside the school," engaging students in two separate classrooms, Spurlock said. One student, an 18-year-old male, was killed in the school, according to Deputy Cocha Heyden, a spokeswoman for the sheriff's office.

"Over the next few minutes, quite a few shots were fired," Douglas County Undersheriff Holly Nicholson-Kluth said.

"As officers were arriving at the school, they could still hear gunshots, and as they were entering the school," Nicholson-Kluth said.

Spurlock said officers "did struggle with the suspects to take them into custody."

"We do know that we do not have any other suspects. We have all the people that are involved," Spurlock said. Authorities had initially said they were looking for a possible third suspect.

Spurlock said authorities can only say at this point that a handgun was used.

Authorities are working to obtain search warrants for the suspects' homes and a vehicle found in the parking lot, Spurlock said.

He did not release additional information on the suspects. The two didn't appear to be on law enforcement's radar, according to Spurlock.

A school resource officer was not assigned to the school, but the school has private security, the sheriff said.

Eight students were taken to local hospitals. Several of the students who were shot are in critical condition, the sheriff said. The youngest victim is 15 years old, he said.

Five patients were being treated at Littleton Adventist Hospital in Littleton, hospital spokeswoman Wendy Forbes told CNN in an email.

One victim was treated and released from Children's Hospital Colorado South Campus in Highlands Ranch, according to Jaime Berg, a spokeswoman.

Two juvenile patients were being treated at the Sky Ridge Medical Center in Lone Tree.

Spurlock said the suspects were not injured.

The STEM School was placed on a lockdown after the shooting, the Douglas County School District said in a tweet. All other Highlands Ranch schools were on a lockout, the tweet said.

The lockout was later lifted for Highlands Ranch schools, the district said.