Suspect in DC shooting that wounded 4 is dead, police say 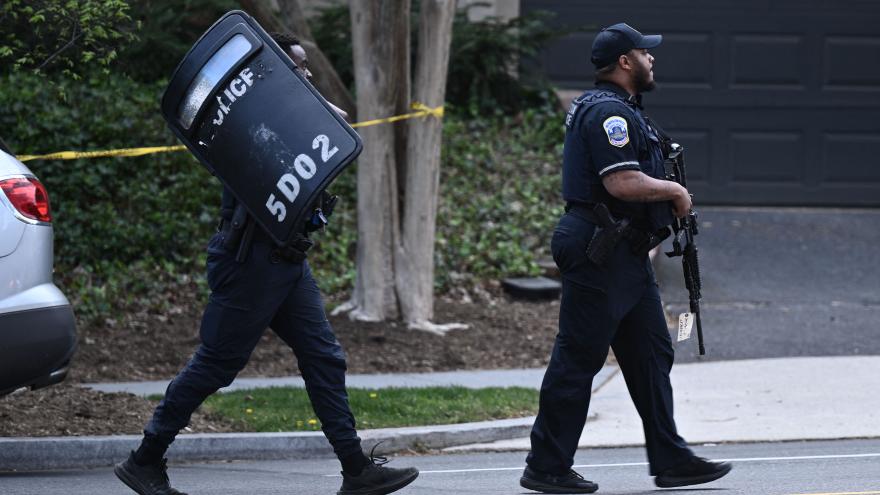 "The suspect that we believe is responsible for this is now deceased," said Contee, who declined to name the suspect pending notification of next of kin. "We believe that the suspect took his own life as MPD members were entering or breaching the apartment where the suspect was located."

Police are not looking for another suspect, Contee said.

Officers recovered six firearms inside the apartment where they found the suspect, Contee said, including "several long guns, multiple, multiple rounds of ammunition, and handguns as well." The investigation is ongoing, he said, adding that police do not have a motive at this point for the shooting.

He said they do not believe there were any other shooters beside the dead suspect, and are not sure of any connection between the suspect and the nearby Edmund Burke School, a college prep school in northwest Washington.

"This was very much a sniper-type setup with a tripod, and this person, obviously, his intent was to kill and hurt members of our community," Contee said, adding the suspect was shooting from north to south.

Contee said it appeared the suspect was shooting at people randomly rather than in any sort of pattern.

Asked if the suspect had been previously known to law enforcement, the chief said the preliminary information he's received indicates no past contact.

Earlier, Stuart Emerman, the assistant chief of the Washington Metropolitan Police Department, named Raymond Spencer, 23, as a person of interest. It was not known if Spencer is currently in the area.

Spencer is not a suspect, Emerman cautioned. Contee declined to say if Spencer was the suspect who is dead but said, "we are no longer looking for that person of interest."

Police are aware of video uploaded to the internet message board 4chan that appears to show the shooter opening fire on Edmund Burke School. The video was uploaded by an individual using the name Raymond Spencer, and police wanted to speak with him to determine whether he was involved in the shooting.

"At this time, based upon the things we have seen on social media, based upon the information we are investigating, we are seeking a person of interest that we would like to speak with. That individual's name has come to light as Raymond Spencer. He is a 23-year-old male," Emerman said at a news briefing earlier Friday.

A man and a woman are in stable but critical condition, Emerman said, updating an earlier report from a police source who said two men had been shot. A girl is also being treated for a minor gunshot wound. All three are being treated at local hospitals.

At a later media briefing, Emerman said a fourth victim, whom he described as a woman in her mid-60s, was grazed by a bullet but did not have to go to the hospital.

One of the four people shot is a retired member of the DC Metropolitan Police Department, Contee said.

The shooting happened on the 2900 block of Van Ness Street Northwest, MPD said.

Washington Mayor Muriel Bowser said authorities were beginning to lift a lockdown at Edmund Burke and students are reunifying with their families.

Samuel Nicolido, a student who lives near where the shooting took place, told CNN that he had heard about 20 shots.

"It was like five shots and then stopped for like, one minute, and then four more, five more, and then again," Nicolido said. "I saw cops with shields everywhere and then they were saying -- they were telling us to stay at home. Don't leave. So yeah, it was scary."

Police are also investigating whether shots fired at a deli about half a mile down the street from the initial shooting location is connected. CNN spoke to the owner of the deli, who said his window had been hit by a bullet at 3:24 p.m. ET. A car parked across the street from the deli was also hit by a bullet, according to the owner of the car who spoke to CNN.

There was also a bullet hole in the storefront window of an optometrist several doors down from the deli.

A large law enforcement presence responded to the scene, including MPD, the city's Fire and EMS Department, the US Secret Service's uniformed division and the Bureau of Alcohol, Tobacco, Firearms and Explosives.

Anthony Guglielmi, a spokesman for the Secret Service, said there is "no impact" to a protectee.

The video uploaded to 4chan is incredibly shaky and has a red crosshairs in the center. It appears to be taken by a bodycam worn by the shooter: it bears a time stamp, 3:17 p.m., and the metadata shows that a video encoder which creates the video file from a bodycam and dashcam manufacturer was used.

CNN has geolocated the video, which shows it was taken from an apartment building directly next to the Edmund Burke School.

An enclosed bridge between two school buildings is seen in the video -- an individual with a backpack appears in one frame -- before multiple gunshots are heard. The shooter appears to reload the weapon once in the video.

CNN has spoken with an eyewitness who confirmed that an enclosed bridge at the school, connecting two buildings, was shot up.

Individuals in the enclosed bridge are seen running. A man on the ground, wearing a reflective vest, runs between parked cars for cover.

4chan did not immediately respond to a CNN request for comment.

The individual who posted the video to 4chan appeared to taunt the police, who were searching for them, in additional posts on the site.