Suspect in custody after opening fire on Cuban Embassy in Washington 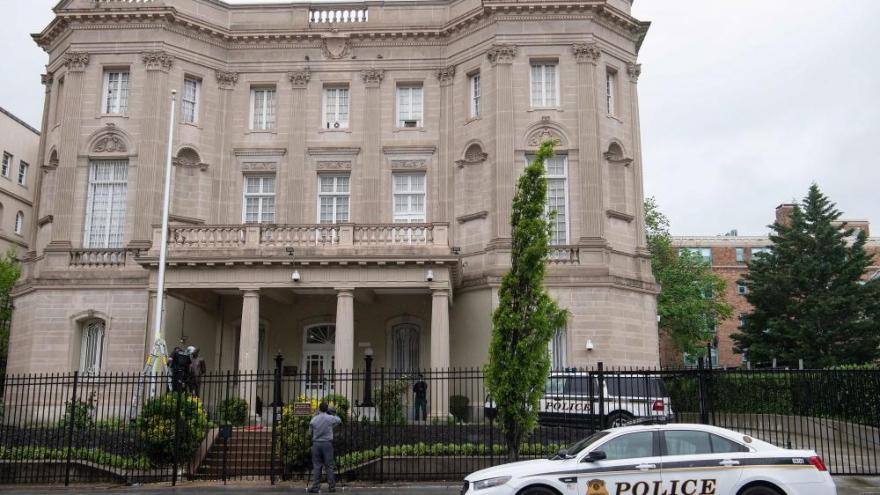 Members of the US Secret Service conduct an investigation at the Cuban embassy in Washington, DC, on April 30, 2020 after a man fired at the building.

(CNN) -- A suspect is in custody Thursday after opening fire overnight on the Cuban Embassy in Washington, DC.

The suspect's motive is unknown at this time.

In a statement, the DC Metropolitan Police Department identified the suspect as 42-year-old Alexander Alazo of Aubrey, Texas. He was arrested without incident at the scene and charged with assault with intent to kill, the statement said.

DC police said in their statement that the suspect was found with an assault-style rifle. A police report identified the weapon as an AK-47. It also noted a "small baggie" of "white powdery substance" was recovered from the vehicle. The report listed suspected hate crime as one of the offense properties, but noted that the suspect's motivations were unknown.

According to the DC police and US Secret Service (USSS), officers responded to reports of shots fired around 2:15 AM. USSS said the individual was arrested "for being in possession of an unregistered firearm as well as unregistered ammunition, assault with the intent to kill, and possession of a high capacity feed device."

"No injuries were reported at the scene," the USSS spokesperson said.

A State Department official said the department's Bureau of Diplomatic Security Service, the Secret Service, the Bureau of Alcohol, Tobacco, Firearms and Explosives, and DC police were conducting a joint investigation.

Photos from the scene, including two shared by the Cuban Embassy on Twitter, showed what appears to be bullet damage on the exterior of the building and the flag pole.

The Cuban Ministry of Foreign Affairs said in a statement that "an unknown individual" opened fire on the embassy.

"No one from the mission's personnel was injured, they are safe and protected, but there were damages to the building as a result of the shooting," the statement said. "The individual, whose identity the Cuban government does not have information on, was detained by local authorities at the scene and is in custody."

"The Cuban government awaits for the corresponding investigation by the US authorities on the identity and motivations of the author of this aggression, as well as the circumstances surrounding this act," the ministry said, adding that it is the US obligation to make sure the Cuban mission is protected. Cuban Foreign Minister Bruno Rodriguez Parrilla reiterated this point in a tweet Thursday.

Later on Thursday, Rodriguez Parrilla called the shooting "a terrorist attack" during a televised address on Cuban state-run TV, blaming rising tensions with the US for the incident.

He said about a dozen Cuban diplomats had been inside the embassy when the shooting took place but that there had been no injuries. He said he had summoned the chargé d'affaires at the US Embassy in Havana to complain that American authorities so far had not shared information regarding the shooting.

The State Department official said that "per the Vienna Convention on Diplomatic Relations, we take our responsibility seriously to protect the premises of the mission against intruders, damages, and threats."

"The Department of State's Diplomatic Security Service works closely with law enforcement agencies to protect and maintain the security and safety of foreign missions in the United States," the official said.