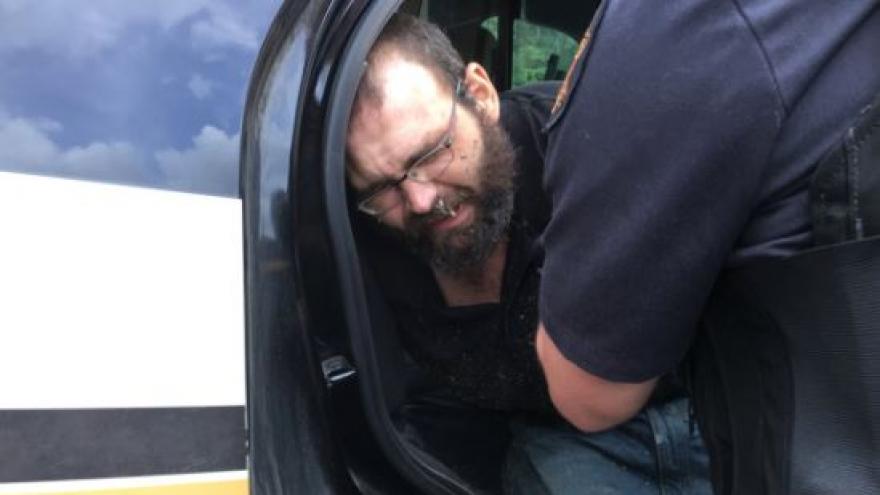 NASHVILLE, Tenn. (AP) -- The Tennessee Bureau of Investigation has announced the capture of a man suspected in the fatal shooting of a Tennessee sheriff's deputy during a traffic stop.

The TBI tweeted photos on Friday of a handcuffed Steven Joshua Wiggins, grimacing as he was placed into the back seat of a law enforcement vehicle. His clothes were muddy and his jeans were ripped open.

The agency said Dickson County sheriff's Sgt. Daniel Baker was killed after responded to a call about a suspicious car on Wednesday. The deputy's car was eventually tracked by GPS to a wooded area 2 or 3 miles (3 to 5 kilometers) away, and the deputy was found dead inside of it.

The TBI said a video recording enabled them to identify the 31-year-old Wiggins as the suspect.

Wiggins was found by a Tennessee Highway Patrol trooper not far from where the shooting occurred, the Tennessean reported, citing the Hickman County Sheriff's Office.

Wiggins had been already wanted on charges that he assaulted a woman and stole her car when he was pulled over Wednesday, according to a report from the Kingston Springs Police Department.

That woman was in the car with Wiggins when he pulled the trigger and she is now jailed on a murder charge in Baker's death, according to court documents.

The report says 38-year-old Erika Castro-Miles told police early Tuesday that Wiggins had slapped her in the face and pulled out some of her hair, then put a gun to her head and threatened to kill her if she called police. She said he then grabbed her keys and took her car without her permission.

At the time of the report, Castro-Miles told police Wiggins was "doing meth all night and smoking marijuana." She told police she planned to press charges, the report said.

According to local news reports, an affidavit filed in Dickson County court says Castro-Miles was sitting in the car with Wiggins when he shot and killed the deputy. She fled the shooting scene Wednesday and hid under a house, the affidavit says.

Castro-Miles is being detained at the Dickson County Jail.