Suspect barricades himself in a home after shooting 2 officers who were responding to a call in St. Louis 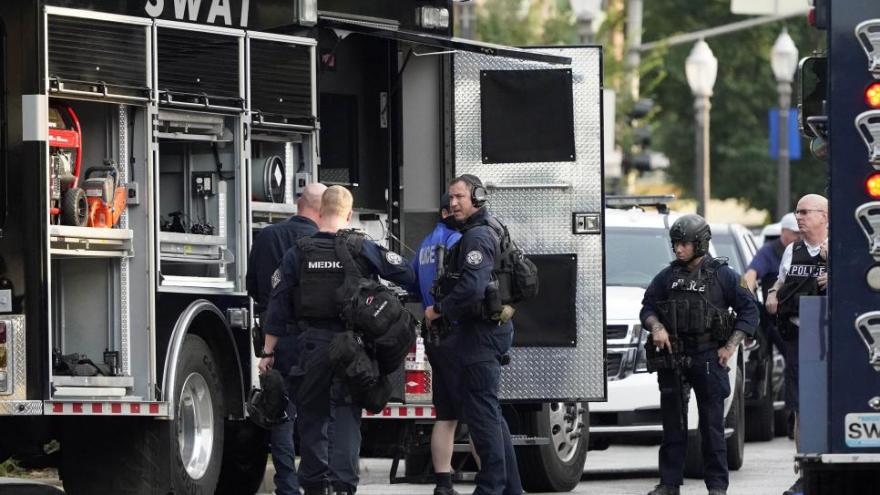 Members of the St. Louis Police Department work near the scene of a shooting Saturday.

(CNN) -- A suspect shot two police officers who were responding to a call in St. Louis then barricaded himself in a home for hours, authorities said.

One of the officers was shot in the head and is in critical condition and the second one was wounded in the leg, St. Louis Police Commissioner Col. John Hayden Jr. said. They were responding to the shooting call Saturday evening.

The suspect is believed to have ordered a couple out of their home and then barricaded himself inside. Hostage negotiators are trying to persuade the suspect to come out and don't believe anyone else is inside the home, Hayden said Saturday night.

Both officers are around age 29, according to Hayden.

"This is our eighth officer shot in the line of duty, trying to do the job, that's all they're trying to do," Hayden said. "And they're, they're suffering under gunfire." He asked for prayers for the officers.

In a tweet Saturday night, Gov. Mike Parson called for an end to the violence in the city.

"Two @SLMPD officers were shot by a gunman tonight while protecting St. Louis citizens, and they are now hospitalized," Parson said in the tweet. "Teresa & I are praying for the officers and their families. Chief Hayden said this makes eight STL officers shot since June. This violence must end! #BackTheBlue."

A summer of violence

Eight St. Louis Police officers have been shot in the line of duty since June, according to Hayden.

On June 2, the department posted on its Facebook page that four officers had been struck by gunfire in a single night. All four officers suffered non-life threatening injuries, the post said.

Another officer was shot on July 26 while addressing multiple cruisers in the area, another post to the department's Facebook page said.

On August 3, an off-duty officer was shot while working a second job in plain clothes and a tactical vest, St. Louis Police Maj. Mike Larson said in a news briefing. The officer, 47, had 24 years of service with the department, Larson said.

He suffered a gunshot wound to the arm and was expected to make a full recovery, according to Larson.