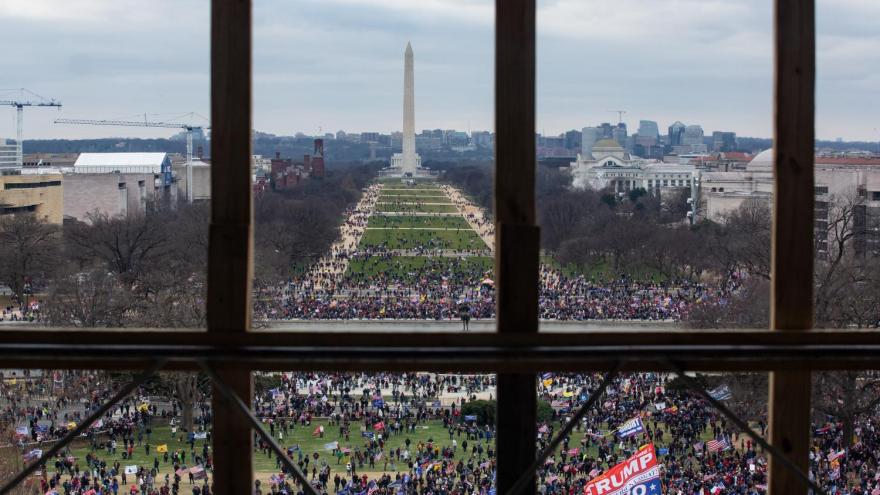 President Donald Trump supporters gather outside, as seen from inside the US Capitol on January 6.

(CNN) -- Aalayah Eastmond was scrolling through Twitter this week when she saw a meme comparing lawmakers on lockdown at the Capitol to students during active-shooter drills in public schools.

Eastmond survived the deadly shooting at Marjory Stoneman Douglas High School in Parkland, Florida, in 2018. She was a junior and recalls sheltering in place that day when 17 students and teachers were killed.

"It's a very weird situation as a gun violence survivor and a school shooting survivor, and wanting lawmakers to understand that feeling to get work done and laws passed," she told CNN. "But the entire situation... It's a lot.

"The goal is to decrease the amount of people that experience what I experienced," said Eastmond, who has testified before Congress twice, lobbied for legislation, and participated in last summer's racial justice movement. "I'm glad [lawmakers] understand the fear and the feeling, but the situation in which caused them to feel that, it really infuriates me."

Young adults who grew up amid shootings and lockdown drills have shared this week that lawmakers at the Capitol on Wednesday -- many of whom have resisted action on gun violence -- now have experience dealing with the trauma students face.

These young people say the experience should help lawmakers understand -- but they also say legislative change won't come immediately, if at all.

"A real reality for many teens in America"

On average, CNN found that in the year following Parkland, there was a school shooting in the US every 12 days. Between 2009 and 2019, at least 177 schools experienced a shooting, according to a CNN analysis completed in 2019.

Mariah Cooley was at her high school during a lockdown in winter 2018.

Cooley, who attended Rich Woods High School in Peoria, Illinois, had witnessed lockdowns before. But this time was different, since someone had a gun in the building, she said.

"In those moments I felt so afraid, I started texting my parents to let them know what's going on," Cooley described. "I was on the second floor thinking, 'Can I jump from this window, hide in the closet?' That's a real reality for many teens in America because the government has failed to put policies in place to stop these shootings at our schools."

While the lockdown ended without casualties, the experience had a lasting impact on Cooley, she says.

Cooley was once again fearful watching the lockdown at the Capitol and sympathized with lawmakers and their families.

"I hope [lawmakers] realize how much trauma high school Americans and middle school kids go through, not necessarily every single day, but more often than every other nation worldwide," Cooley said.

'A part of everyday life as a child'

According to Lane Murdock, who grew up in Ridgefield, Connecticut, near Sandy Hook Elementary School -- where 26 students and teachers were shot and killed in 2014 -- active shooter drills "were a part of everyday life as a child."

After the Parkland shooting in 2018, Murdock came up with the idea for national school walkouts across the country to attract attention from lawmakers. While Murdock's original idea was for her and her classmates to walk out of their school on the anniversary of the Columbine school shooting, thousands of students from New England to Hawaii ended up walking out of school in protest that day.

"Politicians always mourned with their communities, but always kind of knew it wouldn't happen to them," Murdock told CNN after the Capitol insurrection. "In America, politicians have certain privileges.

"I'm mourning the fact that our country has become a place where our politicians have to hide in fear," Murdock said. "But it was displaying to me something I already knew when it comes to control and distribution of widespread use of guns."

"When I see pictures going all over social media of senators and representatives in the House ducking under those chairs and hiding out in their offices... it is kind of weird seeing adults in suits doing that when I'm so used to seeing young kids doing that," Corin told CNN.

Kasky said, "Mitch McConnell and my sixth-grade sister now have something in common."