Surveillance videos show multiple people had trespassed at the home Ahmaud Arbery visited. He was the only one killed 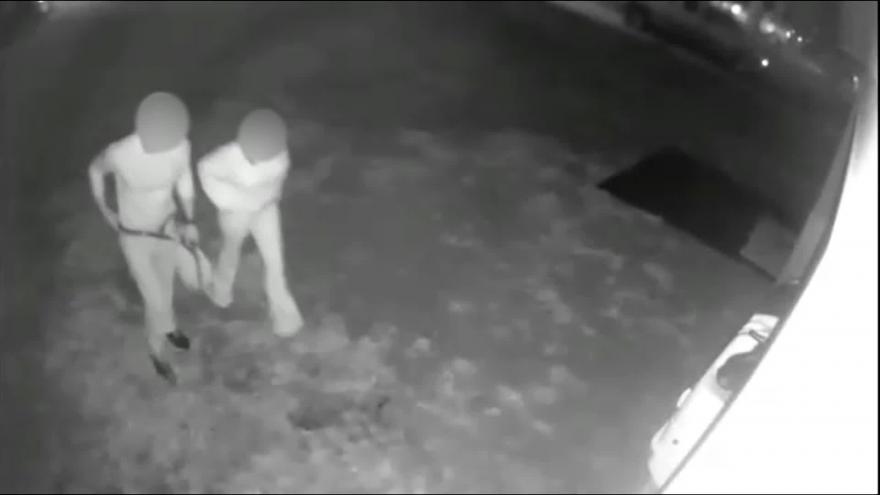 Night video shows a male and a female enter the home from outside.

(CNN) -- Ahmaud Arbery was shot and killed while jogging in Brunswick, Georgia, on February 23, 2020.

Cell phone video of the fatal interaction soon surfaced between Arbery and the two men who chased him, Gregory and Travis McMichael, raising more questions and prompting a call for justice from celebrities, law enforcement, community leaders and civilians.

The men were arrested more than two months after the shooting death and charged with felony murder and aggravated assault.

"The truth will reveal that this is not just another act of violent racism," Frank Hogue, an attorney for the men, said at a news conference. "Greg McMichael did not commit murder."

"Travis has been vilified before his voice could even be heard. ... The truth in this case will exonerate Travis," a statement from Robert Rubin and Jason Sheffield, attorneys for the younger McMichael, reads.

Gregory McMichael told police after the shooting that he and his son pursued Arbery because they thought he looked like a suspect in a series of recent break-ins, a police report said. No such string of break-ins was reported to police in more than seven weeks preceding the shooting, Glynn County police Lt. Cheri Bashlor told CNN.

A struggle ensued between Arbery and Travis McMichael, who was armed with a shotgun, according to the report and a video that appears to show the incident. Arbery was shot three times, including twice in the chest, according to a Georgia Bureau of Investigation autopsy report.

No string of break-ins was reported in more than seven weeks before Arbery's death. And new surveillance video taken from a home under construction that Arbery entered on the day of his death is creating more questions, as it's clear he wasn't the only one who entered the property.

Homeowner Larry English has confirmed through the release of surveillance videos that multiple people had trespassed at his home which was under construction. Arbery was the only one killed.

CNN obtained 11 surveillance clips spanning from October 25 to February 23 from Attorney J. Elizabeth Graddy, representing English, on Saturday. Two of the videos were obtained by CNN prior to this week and six others were sent on Friday.

Some of the videos provided were dated October 25, November 18, December 17, February 11 and February 23. The videos with dates were sent to CNN by Graddy with the dates as their titles.

Eight clips were dated and three clips, two showing children entering the home and one clip showing a man and a woman entering, were not dated.

On October 25, nighttime video shows a black adult male walking around the house, which is under construction and down to the studs.

Within a month, a black adult male is seen in the house on two separate videos taken November 18. The man is shirtless and walks around the home.

On December 17, three separate clips show a black adult male walking around the home at night before jogging off empty handed.

On February 11, video shows a car's headlights drive by the home at night before a black adult male is seen walking around the house.

The last video, which is the only video that has been confirmed to be Arbery, was taken during the day February 23. It shows him walking around the home which is still under construction.

Only one video is confirmed to be Arbery

Arbery's family has previously confirmed to CNN that one video, dated February 23, was of him entering the house prior to the shooting.

When asked about the new videos, S. Lee Merritt, attorney for the Arbery family, said he was not going to continue to ask the family about people seen in surveillance videos.

"I have chosen to stop questioning the grieving family of Ahmaud Arbery about images from the cameras mounted at the construction site of Larry English as Mr. English himself has said no criminal activity ever took place there and it is clear that Ahmaud was on the premises in the past along with many other people," Merritt said in a statement emailed to CNN.

English previously told CNN that someone stole $2,500 worth of "off-shore tackle" from a boat in his garage, but said he could not identify the perpetrator, the theft was not captured on his video, he did not remember the date of the incident and no police report was filed.

The homeowner does not know anyone seen in the videos which were transmitted to English's phone by his security system each time someone entered the property, Graddy said.

"We do not know who any of the individuals in the nighttime videos are and never have," the lawyer said in an email. "The reason that Larry English sent the videos to his neighbor ... in the first place was to ask, 'Do you know any of these people?'"