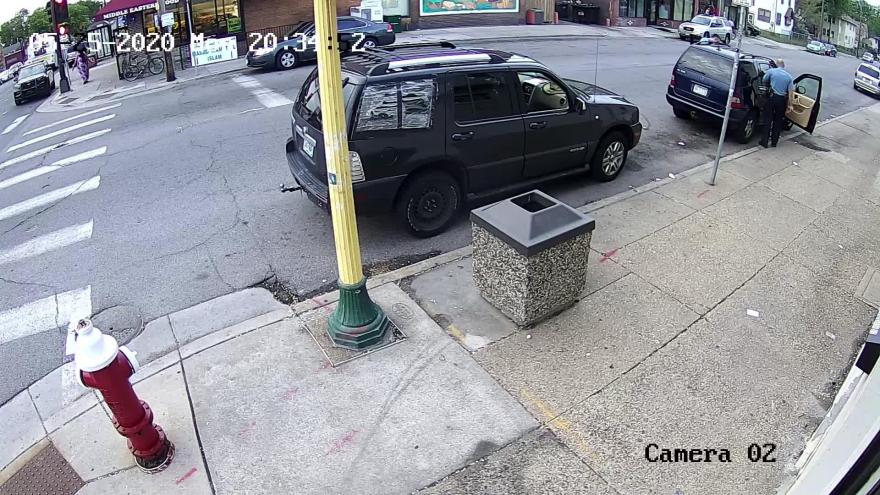 Surveillance video from outside a Minneapolis restaurant appears to contradict police claims that George Floyd resisted arrest before an officer knelt on his neck.

(CNN) -- Surveillance video from outside a Minneapolis restaurant appears to contradict police claims that George Floyd resisted arrest before an officer knelt on his neck.

Floyd's death this week sparked protests across the country after video emerged that shows the 46-year-old black man handcuffed and on the ground saying, "I can't breathe," as a police officer holds him down with a knee on his neck.

All four officers involved in the incident have been fired from the Minneapolis Police Department. The officer who knelt on Floyd, Derek Chauvin, was arrested Friday and charged with third-degree murder and manslaughter, according to Hennepin County Attorney Mike Freeman.

Earlier this week, police said in a statement they were responding to an alleged forgery Monday evening and that Floyd "physically resisted officers."

But surveillance footage from the nearby Dragon Wok restaurant shows the first point of contact between Floyd and officers. While there are several minutes where Floyd's interactions cannot be seen from the camera's vantage point, the footage does not appear to support the assertion that Floyd resisted arrest.

In the video, two officers approach Floyd and two passengers in a vehicle parked outside the restaurant, located across the street from a convenience store where the alleged fraud occurred.

Officers appear to handcuff Floyd, though the exchange is partially hidden behind the vehicle. Floyd appears to fall before an officer lifts him up and leads him onto the sidewalk, where Floyd sits down against a wall.

Eventually, the officer helps Floyd to his feet before both officers escort Floyd across the street to their SUV. Floyd appears to fall again before a second police vehicle blocks the view of the surveillance camera.

At no point in the video does Floyd appear to struggle against the officers.

Police said in their statement this week that officers "noted (Floyd) appeared to be suffering medical distress" and called an ambulance.

Floyd was declared dead at a hospital a short time later, police said.

Minneapolis police have yet to release bodycam footage from the officers involved.

When asked about the apparent discrepancy between the surveillance footage and the police claim that Floyd resisted arrest, the MPD referred CNN to the FBI and Minnesota Bureau of Criminal Apprehension.

The Minneapolis Park Police -- a separate agency from the Minneapolis Police Department -- released heavily redacted bodycam footage from an officer who responded to the scene, but the officer was not facing the direction of the incident when it happened.

The police account has also been contradicted by at least one witness, Donald Williams, who told CNN he was about to walk into a store when he saw Floyd "panting for his life."

Williams said he heard Floyd telling officers that he couldn't breathe. When Williams asked police what was happening, he said he was told Floyd was "resisting arrest."

"I said, 'officer, he's not resisting arrest, you have your knee on him and you have handcuffs on him, he's detained at this moment,'" Williams said.

Rashad West -- who owns the Dragon Wok restaurant released the video along with another man, Jared Brewington -- who also disputed claims that Floyd resisted arrest.

"Did not see any resistance, not at all," West told CNN's Don Lemon on Wednesday night of the surveillance video.

Brewington, whose business preceded West's at the same location, agreed that he did not see Floyd resisting arrest.