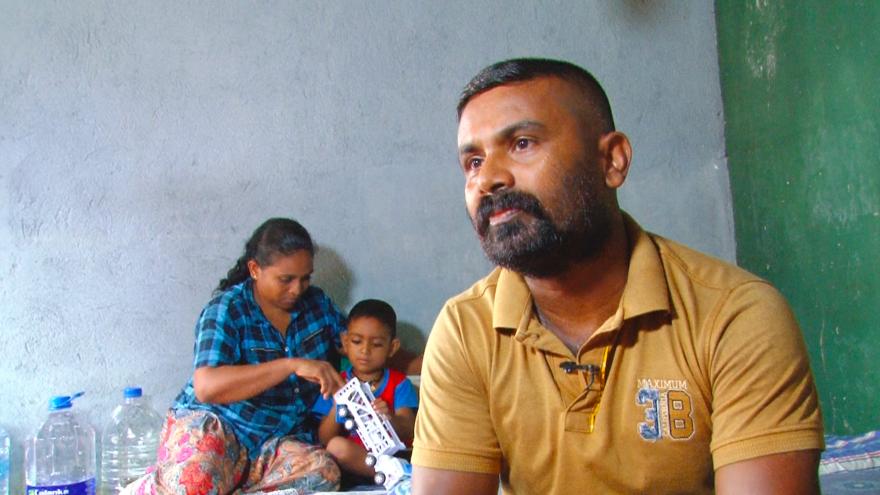 (CNN) -- Three-year-old Miru plays with a bright red toy car, seemingly oblivious to the crisis unfolding around him.

Outside the small room where he lives with his parents, an economic disaster is gripping Sri Lanka, prompting protests, food scarcity and electricity cuts -- and leaving the medicine Miru needs in desperately short supply.

Miru has a malignant brain tumor that causes him to have frequent epileptic seizures and fall unconscious for minutes on end. The only thing that helps is an anti-convulsant drug, but with Sri Lanka's financial crisis hitting medical imports, Miru's father, Upul Chandana, has struggled to find the medicine anywhere.

"This is not available in the hospital anymore. Even nearby pharmacies have run out of stock," said Chandana, as his only son plays on the thin mattress behind him. "Now, even with money, we can't find the medicine."

Sri Lanka is battling its worst economic crisis in decades, as high foreign debt repayments and a massive trade deficit leave the country unable to import basic goods and medicine. Sri Lankans struggle to buy essential items such as milk powder and cooking gas, and protesters have taken to the streets demanding the resignation of the country's President, Gotabaya Rajapaksa, who has refused to step down. Sri Lanka has suspended its external debt repayments while it works with the International Monetary Fund on a bailout package.

Now, with medical drugs and equipment running low, the country is facing what's being described by Singapore's Red Cross as an "unprecedented humanitarian crisis."

Doctors report washing and reusing medical equipment -- and even performing a surgery by the light of mobile phones. So far authorities have not confirmed any deaths from the medicine shortages -- but experts warn the toll from the crisis could surpass the country's more than 16,000 Covid deaths.

"This is a crisis, we can't predict how bad it's going to get," said Athula Amarasena, the secretary of the State Pharmaceutical Association in Sri Lanka that represents pharmacies across the country. "But we are aware we are heading into a further crisis."

A dire situation in hospitals

At both the hospital where his daughter was admitted on April 7, and at each pharmacy he visits, it's the same answer: The medicine isn't available anywhere in the country.

"No government hospital, pharmacy or importer has it. It is nowhere in Sri Lanka," he said of the drug his daughter needs to treat neuroblastoma, a form of cancer. "What should I do? My child may not live long if she doesn't not receive the medication."

Just a few weeks ago, Topotecan was offered free of charge by hospitals, but patients' families are now tasked with sourcing it themselves from private pharmacies, Seneviratne said.

Even that feels impossible. And the problem is much bigger than Seneviratne.

According to a letter released by the Sri Lanka Medical Association (SLMA), all hospitals across the country lack access to emergency drugs and medical equipment. Several government hospitals have been ordered to suspend routine surgeries and reduce laboratory tests due to limited supplies of anesthetics and reagents used for tests, the SLMA says.

And medical equipment, too, is in short supply. The president of the Perinatal Society of Sri Lanka, for instance, has ordered hospitals to sterilize and reuse endotracheal tubes used to deliver oxygen to newborn babies' lungs as the tube shortage becomes "extremely critical," according to a letter sent to the Ministry of Health from the society earlier this month and provided to CNN.

An intensive care surgeon who asked not to be named for fear of losing her job said vital medicine used to treat strokes and heart attacks is now in critically short supply and her hospital is being forced to reuse catheters.

"I know I am endangering the next patient's life. I feel hopeless and utterly helpless," she told CNN this week, adding that she now spends much of her time disinfecting equipment to be reused. "This goes against everything we have been taught to do."

Although hospitals have mostly been spared electricity outages, the doctor told CNN they experienced a power cut while she and others performed surgery on a toddler for a heart condition. They were forced to continue operating using the torches on their mobile phones held by other medical workers until the generators powered up.

"Despite having at least two mobile phones being held up, it is not easy to perform procedures or sutures in such light," she said.

A doctor from a government hospital in the central city of Kandy, who asked not to be named for fear of losing her job, said at her hospital's intensive care unit, they are low on anesthetic, and she worries how hospitals will conduct surgeries with no pain relief. Her hospital has cut back on elective surgeries.

Like the unnamed surgeon, she's been told to reuse catheters and tubes on patients -- and though she knows it could cause damage to patients, she says there's no other choice.

Her team is facing tough choices about who needs the medicine the most.

"We have had to make tough choices these days, particularly in the intensive care unit, such as who gets to live and who doesn't," she says. "We may continue to admit patients but will have no way to treat them."

The surgeon is facing a similar concern.

"I don't know if half of the patients we have in (the intensive care unit) will be alive in the coming weeks if this drug shortage continues," she said.

Some say the government should have seen the situation coming.

According to experts, Sri Lanka's economic crisis was caused by a combination of government mismanagement and misfortune, including the Covid-19 pandemic which hurt the country's tourism industry.

Tax cuts and economic malaise hit government revenue, prompting rating agencies to downgrade Sri Lanka's credit rating to near default levels -- meaning the country lost access to overseas markets. Sri Lanka fell back on its foreign exchange reserves to pay off government debt, shrinking its reserves from $6.9 billion in 2018 to $2.2 billion this year, according to an IMF briefing.

The cash crunch impacted imports of fuel and other essentials -- including medical equipment and drugs.

For months, medical workers have warned of the impending crisis, and doctors and nurses have taken to the streets to protest the government's perceived inaction.

On Wednesday, after playing down concerns and claiming there was no shortage, the country's Health Ministry admitted Sri Lanka is facing a lack of certain drugs and surgical equipment. According to the ministry, the government received $10 million from the World Bank to purchase medicine, although it's unclear when this is due to arrive.

"I would refer to this as more of a challenge and not yet a crisis," the Ministry of Health's coordinator in charge of donor activities and medical supplies Dr Anver Hamdani told CNN this week.

There was no single reason behind the issue, he said, adding that the government would resolve the problem behind the shortagebefore the end of the month.

But others claim the shortages are a man-made issue that could have been averted.

According to Dr. Rukshan Bellana, the president of the Government Medical Officers Forum (GMOF) and an administrator of a state-owned hospital in Colombo, the government could not pay lines of credit for supplies.

He told CNN there are 2,500 listed pharmaceutical items approved by the government, and of those, 60 are in short supply.

"The President has ignored the calls (for action), so what has happened is the situation is getting worse and worse every day," Bellana said.

The government claims it is addressing both the economic and medical crisis. In a statement this week, the Ministry of Health said it was in interim talks with the World Health Organization and Asian Development Bank to obtain funds or medication, and is working to get donations from overseas Sri Lankans.

In a letter addressed to the president on April 7 and made public on Sunday, the Sri Lanka Medical Association said health issues generally not considered emergencies could become life-threatening problems.

"Without urgent replenishment of supplies, emergency treatment may also have to be halted within a matter of weeks, if not days," the letter said.

"This will result in a catastrophic number of deaths."

State Pharmaceutical Association's Amarasena says the problem will get worse before it gets better. Even if Sri Lanka gets help from international organizations or other countries, it could take weeks or months for shipments to arrive -- and some suppliers only start making medications once an order is made. And the country doesn't even have a health minister at the moment -- a string of Cabinet ministers resigned over the crisis.

"The appointed person in charge of this is not empowered enough to make quick decisions," Amarasena said. "We don't have enough time."

At the start of this month, Seneviratne and his family came to the capital from Kandy province, hoping that they'd have a better chance of helping their daughter.

"We come to hospitals with the hope we can find good treatment, so when we find there is not even medicine, we are helpless," he said.

For Seneviratne, there is little he can do to help his daughter. The economic crisis has left him without a steady job, meaning there is no way he can import the drugs from overseas.

"There are many more (parents) who are also in deep sadness because they can't find this medication, even if they have (enough money) in their hands," he said. "We are holding in a lot of pain and sorrow. We don't have the money to take our daughter overseas for medical treatment."

Back in the tiny room in Colombo, Miru's father, Chandana, has similar fears. The family left their paddy farm and moved to Colombo so Miru could be treated. When he bought his last bottle of medicine, the pharmacist who sold it to him said it was his final bottle in stock.

But now he only has a few days left of medication. His only hope is to keep searching for a wayto find more.