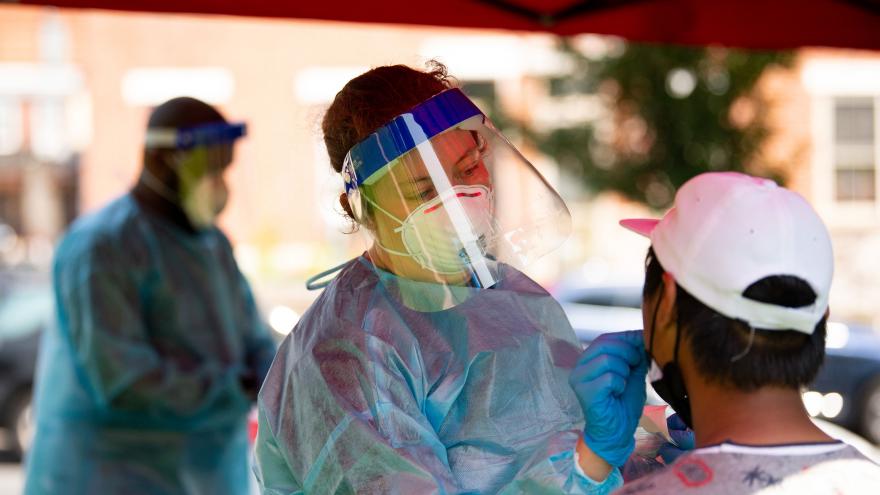 (CNN) -- With the outlook of the Covid-19 pandemic growing worse as hospitalizations and cases surge among the unvaccinated, the surgeon general said many of those who have followed precautions may soon grow complacent due to fatigue.

"I do think that many of those who did make that right decision to get vaccinated, are thinking, 'Gosh, I did the right thing but here we are, still in the middle of this pandemic 18 months later,'" Surgeon General Dr. Vivek Murthy told CNN's Brian Stelter Sunday.

As of Sunday, 50.7% of the total US population was fully vaccinated, according to data from the US Centers for Disease Control and Prevention, and with just under half of the country still unvaccinated, cases and hospitalizations are on the rise again.

Murthy is especially worried about parents who have been working hard to protect their children as the nation grapples with the pandemic. That fear is especially pressing as more children are being hospitalized with the virus, like Kyle Butrum's one-year-old son, Carter, in Arkansas.

In an email to CNN Sunday, a spokesperson for DeSantis reiterated the governor's position that his ban on school mask mandates is about empowering parents to make the best choice for their child and family.

The Broward County School Board chair criticized DeSantis Sunday over his position on school mask mandates.

"We believe we have a constitutional obligation to protect the lives of our students and staff. And we've received threats from our governor, and it's been really, really dramatic and horrible to be put in this position," Dr. Rosalind Osgood said on CBS' "Face the Nation" Sunday.

Another layer of protection some health experts are considering is booster doses to increase vaccine efficacy.

Last week, the US Food and Drug Administration authorized an additional vaccine dose for certain immunocompromised people, which Wen told CNN's Kaitlan Collin was a good decision for a group that "clearly needs a booster because they didn't mount enough of an immune response the first time around."

What health officials aren't in agreement on just yet is whether the rest of the population could benefit from a booster dose.

Israel has already advised an additional dose for people over 50, something the US cannot yet do because there's less data collection, Wen said. So, she hopes officials make a concerted effort to examine other countries' data in addition to that from the US to make the decision.

Wen noted there are a lot of people who may not be severely immunocompromised but "may have some degree of immunocompromise and may be in high-risk conditions, for example they live with somebody unvaccinated, they are essential workers, maybe they should be getting a booster as well."

Dr. Anthony Fauci, director of the National Institute of Allergy and Infectious Diseases, said Sunday the US is planning for the possibility of booster shots and will be "absolutely prepared" to act quickly if they're needed for some groups.

Fauci said on CBS' Face the Nation officials are looking every day at data from the United States and other countries "to determine if, when and to whom we should be giving this. So if it turns out, as the data come in, we see we do need to give an additional dose to people in nursing homes, actually, or people who are elderly, we will be absolutely prepared to do that very quickly."