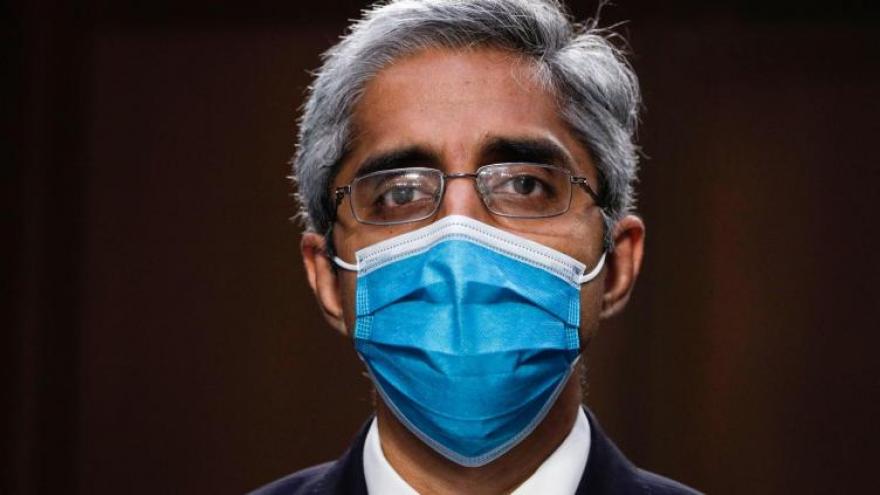 Vivek Murthy, nominee for US Surgeon General, arrives to testify before a confirmation hearing of the Senate Health, Education, Labor, and Pensions committee in Washington, DC, on February 25. Murthy recently warned that health misinformation is "a serious threat to public health."

The stark statement from the surgeon general comes as dangerous falsehoods about Covid-19 vaccines are swirling and as health experts warn of the Delta variant's increasing spread among unvaccinated Americans. Nationwide vaccination rates are dropping, while in 46 states, the rates of new Covid cases this past week are at least 10% higher than the rates of new cases the previous week, according to data from Johns Hopkins University.

"It's one of several reasons why people are not getting vaccinated, but it's a very important one, because what we know from polls ... is that two-thirds of people who are not vaccinate either believe common myths about the Covid-19 vaccine or think some of those myths might be true," Murthy said.

Asked whether he believed public figures and companies that are helping spread misinformation should be held accountable, Murthy suggested that everyone, but especially those with large platforms, shares accountability.

"All of us have to ask how we can be more accountable and responsible for the information that we share," he said, adding that those with larger platforms "bear a greater responsibility to think about that."

White House press secretary Jen Psaki singled out Facebook as needing to do more to combat Covid-19 vaccine misinformation on its platform. Meetings between the Biden administration and Facebook in recent weeks have been "tense," a source familiar with the conversations told CNN.

"Facebook needs to move more quickly to remove violative posts. Posts that will be within their policies' removal often remain up for days. That's too long. The information spreads too quickly," she said at Thursday's press briefing..

A Facebook spokesperson did not directly respond to the source's characterization of the company's efforts but told CNN that Facebook is working to tackle Covid-19 misinformation and has launched initiatives like a vaccine appointment tool.

Psaki called for Facebook to make more information publi about who, and how many people, are seeing and interacting with misinformation about Covid-19. The source said Facebook had given the White House some nonpublic information on the reach of posts about Covid-19 on its platform but needed to share more. The source also described administration officials' frustration with what they view as Facebook's failures to uphold its own policies on vaccine misinformation -- the company often does not act fast enough or is inconsistent in its policing of violating content, the officials complain.

The source pointed to how Robert F. Kennedy Jr., a prominent figure in the anti-vaccine community, had been banned from Instagram, which is owned by Facebook, but not from Facebook itself.

The Facebook spokesperson told CNN, "We don't automatically disable accounts across our apps, because the accounts may post about different things on our different services."

In his memo, Murthy said that misinformation "has also led to harassment of and violence against public health workers, health professionals, airline staff, and other frontline workers tasked with communicating evolving public health measures."

Murthy noted there is a historical context to his warning, referencing how false beliefs that the measles, mumps and rubella vaccine caused autism caused vaccine levels to drop and the denial that HIV causes AIDS reduced access to treatment in the past. He also highlights how the "rapidly changing information environment" — social media platforms and new publications — has made it easier for misinformation to spread, citing a study that false news stories "were 70 percent more likely to be shared on social media than true stories."

The advisory lays out recommendations for families, health professionals, researchers, educators, media, funders, government and technology platforms, and urges individuals to take responsibility to limit the spread of misinformation.

"Before posting or sharing an item on social media, for example, we can take a moment to verify whether the information is accurate and whether the original source is trustworthy," it reads. "If we're not sure, we can choose not to share."

CNN previously reported the White House is preparing to push back more aggressively on vaccine disinformation as vaccinations have dropped. This advisory is not part of that effort but will be used by officials as they call attention to the dangers of vaccine misinformation, according to an official.

The divide between vaccinated and unvaccinated has begun to break along political lines, with Democratic-leaning areas ahead of Republican ones in vaccination rates. Officials attribute part of the reason for the discrepancies to messages repeated in conservative media that question why people need the vaccine and that President Joe Biden's attempts to get the country vaccinated amount to government overreach.

"Millions of people don't have access to accurate information right now, because on social media platforms and other tech platforms we're seeing the rampant spread of misinformation, and it's costing people their lives," Murthy told CNN's Jake Tapper in an interview on "The Lead."