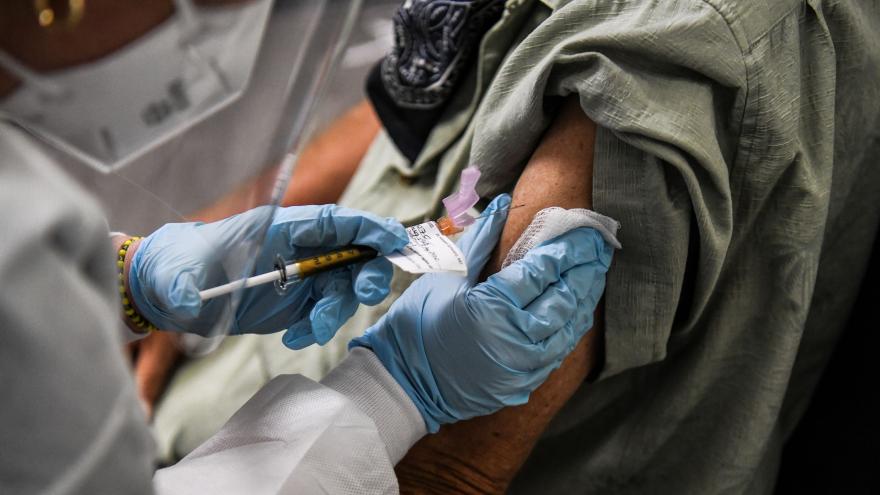 (CNN) -- Dr. Francis Collins, director of the National Institutes of Health, and Dr. Jerome Adams, US Surgeon General, pledged in a Senate hearing Wednesday they would get the Covid-19 vaccine if and when one is deemed safe.

"I am ready to roll up my sleeve as soon as they say it's effective," Collins said, when asked if he would get the vaccine in public view.

The two took questions from senators during the Senate Health Committee hearing on vaccines. Adams and Collins assured the senators and the American public that the vaccine process was being led by science, not partisan politics.

"I want the American people to hear me say this: There will be no shortcuts. This vaccine will be safe. It will be effective. Or it won't get moved along," Adams said. "And when a vaccine is either approved or authorized by the FDA, I and my family will be in line to get it."

The comments come as the US continues to see widespread Covid-19 infections, particularly in areas where colleges have reopened. Over the last seven days, the US has averaged over 36,000 daily new coronavirus cases, according to Johns Hopkins University.

Dr. Jeremy Farrar, director of the Wellcome Trust, said Wednesday at a news briefing that a vaccine would be a critical part of managing the pandemic, but he cautioned against magical thinking.

"There are no magic bullets for infectious diseases," Farrar said. "It's always a combination of public health, of treatments, of diagnostics, of behavior, of poverty, of course -- and yes, in many cases where we're lucky, with vaccines as well."

The US should be performing as many as 200 million Covid-19 tests every month well into next year to have any chance of controlling the pandemic, experts say in a new report.

That number is far beyond the country's current capacity, according to the report released Wednesday by the Rockefeller Foundation and the Duke-Margolis Center for Health Policy.

"The U.S. will likely need very large numbers of all types of Covid-19 tests well into 2021 to contain outbreaks while returning toward normal activity, with a particular need for more screening tests that have very fast turnaround times," the report reads.

Public health experts across the country have for months said testing will play a critical role in helping to reel in the pandemic. Getting enough people tested -- and getting their results back quickly -- will aid contact tracers in tracking down Americans exposed to the virus and help control outbreaks.

Fewer than 30 million tests are currently reported monthly in the country, the report says. As the virus ran unabated across American communities over the summer, some officials said contact tracing was nearly impossible with the lack of testing capacity and the uncontrolled spread.

Adm. Brett Giroir, the testing lead for the White House Coronavirus Task Force, has said repeatedly the US cannot test its way out of the pandemic.

Echoing other officials' claims, the report from the team of experts says more testing is vital.

"At present infection rates, a basic screening strategy will require approximately 200 million tests each month for students and staff at the nation's primary and secondary schools and residents and staff at nursing homes for them to open safely and in stages," the team wrote.

But things could turn around. Testing capacity is improving and companies are working to develop fast and cheap on-the-spot tests that -- if distributed widely enough --- could make a difference, the report says.

"By October 2020, based on recent and announced expected market entry, point-of-care tests will rise to at least 70 million tests per month," the team wrote.

By January, the US could reach nearly 200 million tests monthly. And more growth is possible, the experts said.

Meanwhile, AstraZeneca said Tuesday it has paused trials of its Covid-19 vaccine, one of three that are in the final phase of trials in the US, because of an unexplained illness in one of the participants.

The company said the volunteer affected is in Britain, but its trials worldwide would be but put on hold. AstraZeneca had just announced the start of its Phase 3 testing in the US last week.

The stop may be temporary and the illness may not have been caused by the vaccine. The company is making sure before it goes ahead with more testing. The company didn't give details on the illness.

"This is a routine action which has to happen whenever there is a potentially unexplained illness in one of the trials, while it is investigated, ensuring we maintain the integrity of the trials," the company said in a statement.

"In large trials, illnesses will happen by chance but must be independently reviewed to check this carefully," the company said.

Collins, the NIH director, said the AstraZeneca hold is due to "spinal cord problem." Collins said the pause is "not at all unprecedented."

Indeed, pausing in vaccine trials is very common, according to Farrar, of the Wellcome Trust, and Dr. Melanie Saville, Director of Vaccine Research and Development at the Coalition for Epidemic Preparedness Innovations (CEPI).

"In many ways, I think it shows that the oversight of the trial is working well," Farrar said.

There are two other vaccine candidates in Phase 3 trials, one developed by Moderna, another by Pfizer and its German partner, BioNTech. All three have US government funding and backing.

The Pfizer/BioNTech vaccine could have its candidate ready for regulatory approval by mid-October, Ugur Sahin, CEO and co-founder of BioNTech, said in an exclusive interview with CNN.

"It has an excellent profile and I consider this vaccine ... near perfect, and which has a near perfect profile," Sahin said.

Pfizer and BioNTech say they plan to provide 100 million doses of their vaccine candidate, BNT162, by the end of the year, and up to 1.3 billion doses in 2021.

Moderna's Phase 3 trial started more than a month ago, on July 27. The US government has a deal with Moderna for the company to deliver 100 million doses once the vaccine is approved.

AstraZeneca's pause on trials could give the public more confidence that companies are sticking to the safety first rule, despite the push from President Trump to get a vaccine out more quickly.

Nine companies, including AstraZeneca, signed a pledge on Tuesday promising they wouldn't seek premature approval for a vaccine, and that they would wait until they had the data needed to show it worked safely.