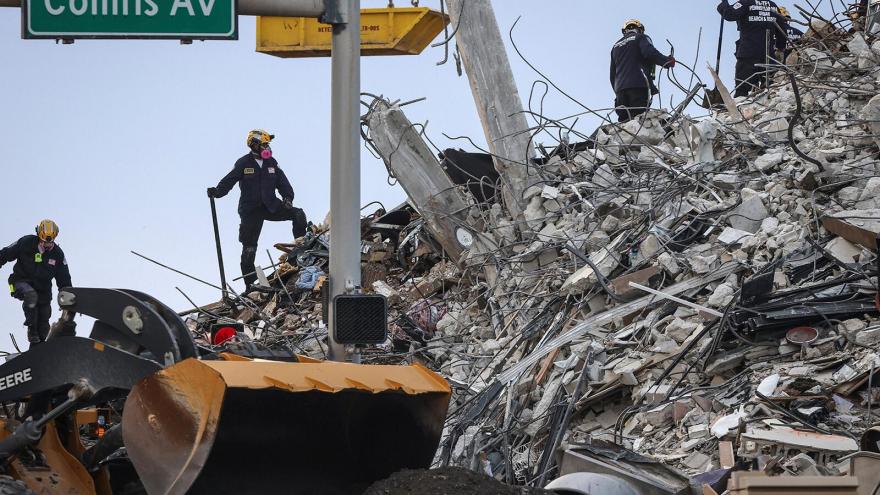 Video shows what is left of the Champlain Towers demolition that happened on Sunday.

There are 109 "reports of people who are potentially unaccounted for," she said, adding that detectives are working to verify each report.

The teams battled a line of storms -- including lightning and strong winds -- Tuesday afternoon as Tropical Storm Elsa made its way closer to the state's western coast.

Those were likely the worst of the impacts from the tropical storm that the search efforts will face today, but some lighter effects are still possible later Tuesday, CNN meteorologist Taylor Ward said.

The likelihood of finding survivors under the rubble continues to shrink every day that passes.

"You can feel the pain, you can feel the urgency here from all of the first responders that are surrounding us," CNN's Rosa Flores, who was at the site of search and rescue operations on Tuesday evening, said.

Search and rescue personnel are on the site, carefully sifting through the rubble and navigating the dangerous of the pile, Flores said. Many of them are working 12-hour shifts, Flores added, stopping briefly only "to check their oxygen levels, to check their pulse, to make sure that they're in the physical condition necessary to continue searching."

Officials are continuing to monitor weather conditions: as long as the wind gusts stay below 45 mph, search and rescue teams can continue their work, Miami-Dade Fire Rescue spokesperson Erika Benitez said. But if gusts reach that number, the teams will be called off the rubble pile.

Any lightning within a 2.5-mile radius would also stop the search for 30 minutes, Benitez told CNN.

Two people remain hospitalized and in the care of Jackson Health System following the collapse, according to the health system's spokesperson Lidia Amoretti-Morgado. No more details are available due to privacy, she said.

The magnitude of that rubble is significant; about 5 million pounds of debris have been removed from the site of the collapse so far, Mayor Cava's office said.

The condo's "pancake"-style collapse, in which each floor falls squarely upon the floor below, has added to the misery. Miami-Dade County Fire Chief Alan Cominsky said rescuers are searching the rubble for voids or livable spaces where people may have survived -- but so far have found no positive signs.

"The key things we were looking for all throughout in regard to void space, livable spaces, you know, we're not coming across that," he said.

The condo's collapse has raised questions about whether other residential structures could be at risk in Miami-Dade County, where sea levels are rising, the salty air is corrosive and nearly two-thirds of all commercial, condo and apartment buildings are as old or older than the 40-year-old building that collapsed, according to a CNN analysis of county records.

In particular, officials said they have concerns about the condo's sister building, Champlain Towers North, which was built around the same time using the same developer and likely the same materials as the building that collapsed, Surfside Mayor Charles Burkett said.

"Given we do not know why the first building fell down, we have significant concerns about that building," Burkett said Tuesday.

Rest of condo building was demolished

Rescue work was briefly paused over the weekend to demolish what was still standing of the condo building on Sunday night. Officials deemed the move necessary for the safety of rescue crews, particularly with the storm coming.

The danger was that the structure could fall onto the already existing rubble -- or those working on it -- with very little warning or control. Instead, Mayor Cava said Monday that crews were able to execute the demolition "exactly as planned."

"Only dust landed on the existing pile," she said.

The demolition of the remaining structure had made the efforts much safer, officials said.

"The worst thing that could have happened was to have a storm come in and blow that building down on top of the pile," Burkett said.

Officials credited Sunday night's demolition with the ease, safety and speed with which crews are operating at the pile of rubble.

Florida Gov. Ron DeSantis said Monday that teams on the ground are making "a lot of progress" and that while the demolition decision was not made by his office, he thought it was the "right thing to do" to help everyone move forward.

"Truly, we could not continue without bringing this building down," Cava said. "As we speak, the teams are working on that part of the pile that was not accessible before the building was demolished."

Feelings are more complicated for the residents who lived in the part of the building that was demolished: they were evacuated and then told it was unsafe to go in and get their belongings before the structure was destroyed.

Burkett said people around the world have raised millions of dollars to support those families, many of whom have been relocated to hotels. Officials have also asked them to catalog their personal items in hopes of recovering them from the debris and returning them.

"All of the politicians are focused on supporting the families and getting everybody out that rubble pile and reuniting them with their families," Burkett told CNN's Boris Sanchez. "It is really a beautiful thing. There is a lot of love here."

Burkett said Tuesday that several families have asked to visit the collapse site again, and he will work to make that happen.

"Of course, we have to work around the rescue efforts," he said. "I think it would be very, very good for those families to again see the amazing efforts that are being expended on their behalf."

Officials have not given up hope of finding people alive

More federal partners have arrived at the site to investigate why the building collapsed. Mayor Cava said the National Institute of Standards and Technology (NIST), the US Geological Survey and the National Science Foundation are sending staff.

Given the "rough terrain of the pile," LIDAR scanners are working so they can "better analyze the debris," she said. "All this evidence will be critical to the NIST eventual fact-finding report."

Since returning to work after the demolition, rescue teams have recovered a number of additional bodies.

Two of the deceased have been identified as Ingrid Ainsworth, 66, and Tzvi Ainsworth, 68, according to the Miami-Dade Police Department. Six of the 32 victims killed in the incident remain unidentified.

The victims range in age from 4 to 92-years-old.

Despite the slim odds, officials are still holding out hope of finding people alive in the rubble.

"There's no giving up hope," Burkett said. "I think we're all unified on that. We owe it to the families. We have a duty, unlimited resources -- we're going to make sure everybody gets out."

Correction: An earlier version of this story gave the wrong title for Daniella Levine Cava. She is the mayor of Miami-Dade.