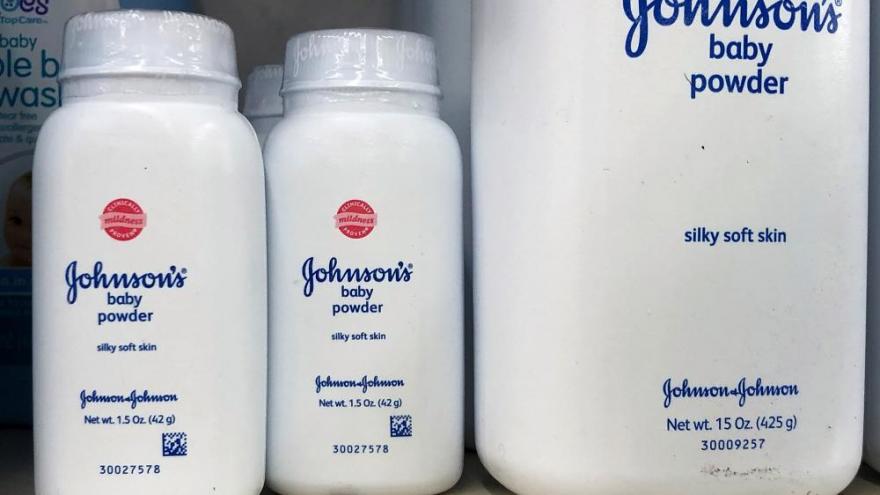 The Supreme Court said that it won't review a lower court opinion that awarded a $2 billion verdict in a case brought by a group of women who sued Johnson & Johnson after developing ovarian cancer which they say stemmed from exposure to asbestos in the company's talc powder.

(CNN) -- The Supreme Court said on Tuesday that it won't review a lower court opinion that awarded a $2 billion verdict in a case brought by a group of women who sued Johnson & Johnson after developing ovarian cancer which they say stemmed from exposure to asbestos in the company's talc powder.

There have been tens of thousands of lawsuits brought against J&J and other talcum powder companies. J&J had sold the talc-based powder, Johnson's Baby Powder, for more than 100 years and created several other products using talc. Talc is among one of the softest minerals that can reduce friction and has a great ability to absorb oils and odor.

Neither Justice Samuel Alito nor Brett Kavanaugh participated in the court's review of the case. Although they didn't explain their thinking, it is likely because Alito had stock in the company and Kavanaugh's father worked with a trade association linked to Johnson & Johnson.

Johnson & Johnson had asked the Supreme Court to review a June 2020 decision from a Missouri appeals court. That ruling had reduced a lower court decision in which a jury awarded 22 plaintiffs $4.7 billion when the women claimed that their regular use of J&J's talc-based powder caused their ovarian cancer. The company had asked that court to throw the lawsuit out altogether.

Instead, the appeals court cut the verdict to $2.1 billion since some of the women who brought the lawsuit lived out of state. It also eliminated two of the plaintiffs. It otherwise upheld the outcome of the trial, since, the court found "significant reprehensibility in (J&J's) conduct," and said that J&J exposed consumers to asbestos over several decades "done with reckless disregard of the health and safety of others."

During the trial, lawyers introduced internal memos that showed J&J had discussed the presence of asbestos in their talc products for several decades. The plaintiffs told the appeals court that J&J "knew of the asbestos danger," tried to discredit scientists that were publishing studies that were unfavorable about J&J products, and decided not to switch out talc in its powder for cornstarch because it was costly.

Mark Lanier, a lawyer for the plaintiffs in the case called Tuesday's ruling a "victory for justice."

"This was a victory not just for the amazing women and their families who we were privileged to represent, but a victory for justice," Lanier told CNN. "This result is exactly what separates America from the rest of the world. This decision sends a clear message to the rich and powerful: You will be held to account when you cause grievous harm under our system of equal justice under law."

In a statement Tuesday, Johnson & Johnson said the court's action "leaves unresolved significant legal questions that state and federal courts will continue to face on issues related to due process rights and personal jurisdiction."

The company added, "The matters that were before the court are related to legal procedure, and not safety. Decades of independent scientific evaluations confirm Johnson's Baby Powder is safe, does not contain asbestos, and does not cause cancer."

In May 2020, J&J announced that it would stop shipping talc-based Baby Powder in the US and Canada. The company had said at the time that it had re-evaluated its products in light of the novel coronavirus in March and stopped shipping hundreds of items, including the talc-based powder, so it could place a priority on its high-demand products.

The company's cornstarch-based powder remains on the market.

Some scientific studies have shown that women do have an increased risk of ovarian cancer with talc use in the genital area, but others do not. Most studies suggest more research is needed.

A separate set of lawsuits tied the talc products to mesothelioma. Scientists in those trials testified that they found asbestos in samples of the product. The company argued it did extensive testing to make sure their products were asbestos-free. Talc is often mined near asbestos and studies have shown there is a risk of cross-contamination during mining, but since the 1970s talc products were required to be asbestos-free.