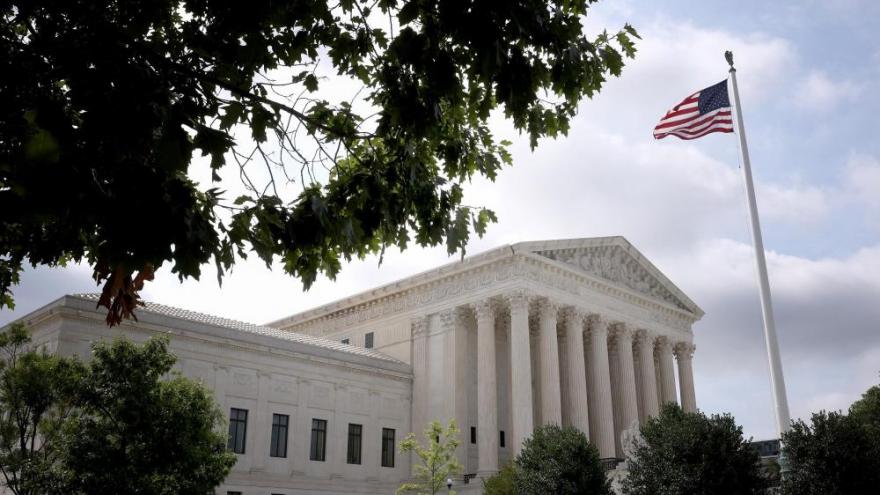 The U.S. Supreme Court, pictured on June 21, in Washington, DC declined the Biden administration's request that it put on hold a lower court order requiring the revival of the Trump-era "Remain in Mexico" immigration policy.

(CNN) -- The Supreme Court on Tuesday declined the Biden administration's request that it put on hold a lower court order requiring the revival of the Trump-era "Remain in Mexico" immigration policy.

The court's three liberal justices publicly noted that they would have granted the request to halt the lower court's order.

The controversial policy forces migrants to stay in Mexico as they await their US immigration court dates. It was suspended at the beginning of President Joe Biden's term and formally terminated months later.

Texas and Missouri sued to challenge the Biden administration's termination of the program. Earlier this month, US District Judge Matthew Kacsmaryk, a Trump appointee, said that the Biden administration violated the Administrative Procedure Act -- which requires that agencies take certain procedural steps when implementing policy -- in how it went about unwinding the program, formally known as Migrant Protection Protocols.

The Supreme Court's brief and unsigned order on Tuesday said the Biden administration had failed to show that it was likely to defeat the claim that the termination of the program was arbitrary and capricious.

In the petition it filed with the Supreme Court last week, the Biden administration argued the order reviving the program "would result in irreparable harm."

"MPP has been rescinded for 2.5 months, suspended for 8 months, and largely dormant for nearly 16 months," the administration said. "The district court's mandate to abruptly re-impose and maintain that program under judicial supervision would prejudice the United States' relations with vital regional partners, severely disrupt its operations at the southern border, and threaten to create a diplomatic and humanitarian crisis."

The Supreme Court's rejection of the request sets the tone for how skeptically it will view emergency requests from the Biden administration, after, on several occasions during the Trump administration, the conservative court intervened to pause lower court orders interfering with that administration's policies.

"Tonight's decision not only leaves in place a district court ruling that requires the Biden administration to reinstate a program that has been defunct for months, but it also makes clear how much of a difference the change in administration makes when it comes to the justices and immigration policy," said Steve Vladeck, CNN Supreme Court analyst and professor at the University of Texas School of Law.

"Of the 28 requests for stays from the Justice Department that the court granted during Trump's tenure, 11 were to freeze lower-court injunctions of controversial immigration rules," Vladeck added. "Here, the first time the Biden administration asks for the same relief, the court refuses to freeze an injunction -- one that requires reinstatement of one of those controversial rules."