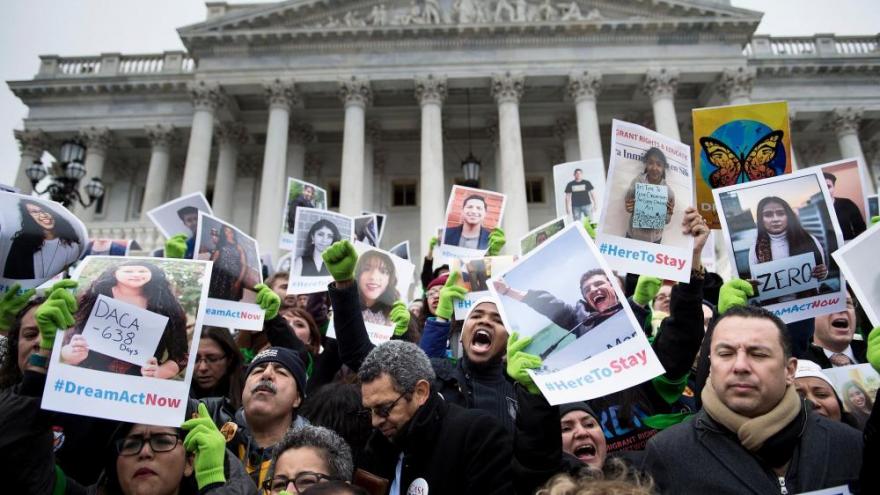 The fate of hundreds of thousands of young undocumented immigrants who arrived in the US as children will be on the line when the Supreme Court hears arguments on the Obama-era Deferred Action for Childhood Arrivals program.

(CNN) -- The Supreme Court appeared to struggle Tuesday with the Trump administration's efforts to terminate the Obama-era program shielding hundreds of thousands of undocumented immigrants who arrived in the US as children from deportation.

Chief Justice John Roberts and Justice Brett Kavanaugh -- whose votes will be key -- seemed poised at times to accept arguments put forward by the government to end the program. But after an hour and a half of arguments, it wasn't entirely clear how they would ultimately vote in the case. The four liberal justices, on the other hand, plainly made clear they believed the government had not followed proper procedures as required by law when winding down such a program.

President Donald Trump called in 2017 for the Deferred Action for Childhood Arrivals program to be undone, but has been stymied by lower courts that have allowed renewals to continue as the appeals process plays out. Waiting in limbo are the so-called "Dreamers" who depend on the program, created through executive action under President Barack Obama after the failure of congressional immigration reform efforts, to legally work in the US and be shielded from deportation.

Kavanaugh in his questions hinted that he thought the government had ultimately issued a memo -- after the decision to terminate was made -- that adequately explained its rationale and acknowledged the impact on those who had come to rely on the program. He called it a "considered decision."

And Roberts noted that similar programs had been struck down by a federal appeals court, suggesting that he thought the government's reasoning was on solid ground. He noted that he was among the conservative justices on the court who voted against those programs.

Neil Gorsuch and Samuel Alito seemed the most supportive of the government's position.

"What more would you have the government say?" Gorsuch asked a lawyer for the Dreamers at one point.

But Justices Elena Kagan, Steven Breyer, Ruth Bader Ginsburg and Sonia Sotomayor pushed the government hard, suggesting the administration had violated the law when it moved to phase out the program because it hadn't taken into proper consideration how many people, organizations, educational institutions, would be impacted by an abrupt decision. To comply with administrative law, the justices suggested that the government had to provide a more reasoned decision. They questioned the government's reliance on whether the original program was lawful.

Sotomayor noted that the "current President" told DACA-eligible people that they were "safe" but then later moved to terminate the program. She underscored the human implications, reminding her colleagues that the termination of the program could "destroy lives" and she highlighted her belief that the Trump administration hadn't acted in accordance with the law.

She said that only after the policy had been blocked by the courts did the administration provide more of its rationale. She said the courts shouldn't consider reasons that were "added later."

It is always difficult to determine how the court will rule after oral arguments. For instance, last term, after arguments, it seemed likely that Roberts would side with the Trump administration to allow a citizenship question on the census, but in the end, he sided with the liberals.

Decision likely to have 2020 impact

Trump's push to end the program is in some ways a centerpiece for his strict policies on immigration, and the Supreme Court's ruling is likely to come down in June, at the height of the 2020 presidential campaign, further inserting the court into an issue that energizes the base of both parties.

The decision stands to affect around 700,000 undocumented immigrants, many from Mexico and Central America. Democratic and Republican lawmakers have generally rallied behind the program's beneficiaries, who were brought to the US illegally as children and who have been left in limbo.

Immigrant advocates and DACA recipients from across the country descended on the steps of the Supreme Court Tuesday morning.

Under gloomy, cold weather, people donned ponchos and waited in line to get a chance to briefly watch the arguments.

One of the plantiffs in the case, Antonio, was first in line in front of the Supreme Court Tuesday morning to attend the arguments. The Dreamer told CNN he's been there since early in the morning, but line-sitters have been taking turns holding his place since last weekend. "They will decide my fate," he said of the justices set to hear the arguments.

One group of four DACA recipients had been in line since Monday at 1 p.m., staying just steps from the court overnight.

Sergio Rodriguez, one of the four, said they're here in "solidarity for all immigrants, including our parents." Rodriguez came from California to get a chance to watch the arguments.

He wasn't alone in traveling from around the country to take part in the day.

Cynthia De la Torre Castro, a DACA recipient, traveled from Fort Worth, Texas, to be here Tuesday. "This decision is historic and can disrupt everyone's lives," she said.

Lawyers who have been in the trenches on this issue for two hours have separately been lining up since the early hours of the morning. They include Andy Pincus, who filed a brief on behalf of businesses, and law professor Josh Blackman, Marielena Hincapie of the National Immigration Law Center and Karen Tumlin of the Justice Action Center.

Dozens of marchers who began their journey in New York arrived at the Supreme Court just before arguments after walking for nearly two weeks.

Minutes before oral arguments are set to begin, the crowd gathered, including advocates and DACA recipients, broke into chants and raised an array of signs supporting the program.

"This is what Democracy looks like," the crowd chanted.

Scrutiny over how program was ended

If the court rules in favor of the administration, it will allow the phase out to begin. DACA recipients, who supplied the government with personal information in order to benefit from the program, will not be able to renew and receive protections, leaving them subject to deportation once their permits expire.

The plaintiffs, including the University of California, a handful of states and DACA recipients, will argue to the Supreme Court that the phase-out violated the Administrative Procedure Act, a federal law that governs how agencies can establish regulations.

"An administration may impose new or different priorities, but only if it adheres to the APA's requirements and clearly states its policy choices so that it can be held publicly accountable for them," Theodore Olson, a lawyer for the challengers, argued in court filings.

At issue before the justices is not whether the administration has the power to rescind the program, but how it chose to do so.

Olson said that the law demands, "and the public deserves," a "genuine analysis" and "lucid explanation" of the relevant policy considerations before reversing a "long-standing policy and subjecting 700,000 individuals to deportation to unfamiliar nations where they may not even speak the language."

A brief in support of DACA was filed by 143 business associations and companies, who stressed that its phase-out will harm the economy. The brief points to research from the libertarian Cato Institute that estimates that companies will face an estimated $6.3 billion in costs to replace the program's beneficiaries "if they can even find new employees to fill the empty positions."

Tim Cook, the CEO of Apple, also filed a brief in support of DACA, noting that his company employs 443 Dreamers who come from 25 different countries and four continents. "We did not hire them out of kindness or charity," Cook argued.

"We did it because Dreamers embody Apple's innovative strategy." he said. "They come from diverse backgrounds and display a wide range of skills and experiences that equip them to tackle problems from different perspectives."

But Solicitor General Noel Francisco argues that the courts don't have the authority to review the decision.

"A decision to rescind a policy of nonenforcement is a quintessential action committed to an agency's absolute discretion," Francisco wrote in court papers.

And even if the justices disagree, Francisco said that the administration had provided the proper rationale to end the program, particularly in June of 2018 in a memo penned by then-Secretary of Homeland Security, Kirstjen Nielsen.

Nielsen said that it was the administration's belief that DACA itself was illegal if not "legally questionable," and set forth other reasons why as a matter of policy, the Trump administration believed DACA was not a good idea. She contended that the issue should be handled by Congress and that the program would encourage more people to cross the border.

The government has the support of Texas and a group of nine other states who say that if the program is allowed to stay on the books, the states will "continue to incur harm" because they will have to provide "social services like healthcare, education, and law enforcement to individuals whom Congress has declared unlawfully present, but to whom the Executive has granted lawful presence."

Trump weighed in Tuesday before the Supreme Court arguments began, tweeting that many people in the DACA program "are far from 'angels.' Some are very tough, hardened criminals."

In fact, there are rules preventing felons or those committing a "significant misdemeanor offense" from being a DACA recipient in the first place. Applicants go through a background check during the application process though there are exceptions for what the Department of Homeland Security deems "exceptional circumstances."