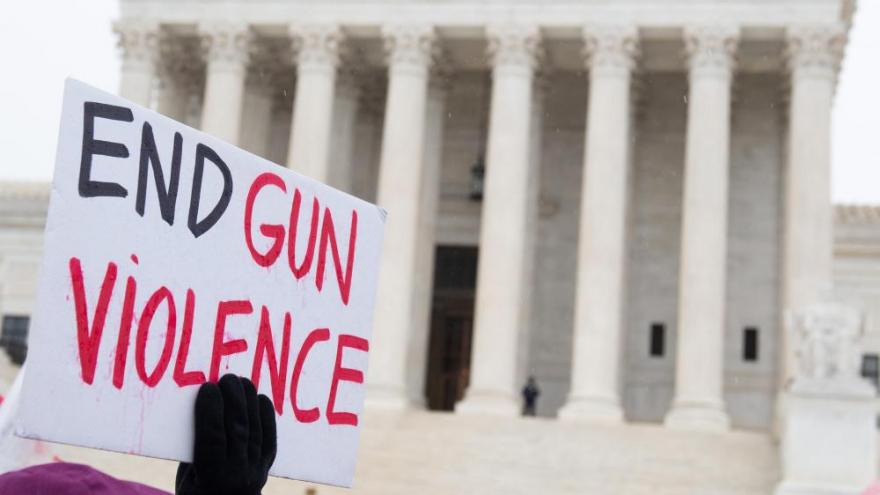 The Supreme Court will take the bench on November 3 to discuss gun rights. Supporters of gun control and firearm safety are seen here outside the US Supreme Court in December 2019.

(CNN) -- The Supreme Court seemed ready to expand Second Amendment rights after hearing arguments for over two hours and expressing skepticism about a New York law that restricts individuals from carrying concealed handguns outside the home for self-defense.

Chief Justice John Roberts at one point pressed New York's solicitor general about the breadth of the law that requires an individual to show "proper cause" before obtaining such a license in locations typically open to the general public, even in rural areas.

"How many muggings take place in a forest?" Roberts asked.

"Why isn't it good enough to say I live in a violent area?" Kavanaugh asked. Barrett suggested the law passed legal muster under the court's landmark 2008 decision that held that the Second Amendment protects an individual's right to keep and bear arms.

During their discussion, however, the justices did suggest that restrictions would be okay for sensitive areas such as schools and subways, but that the New York law as written was too broad.

It's been more than a decade since the justices have decided a significant Second Amendment case and now the conservative-leaning court has the opportunity to reexamine the scope of the right to keep and bear arms in a case brought by an affiliate of the National Rifle Association.

The court could potentially allow more guns to be carried on some of the busiest streets in the largest cities in the nation, at a time when the Biden administration has vowed to push for enhanced gun regulations.

In 2008's District of Columbia v. Heller, the court held for the first time that the Second Amendment protects an individual's right to keep and bear arms at home for self-defense. Except for a follow-up decision two years later, the justices have largely stayed away from the issue infuriating gun rights advocates and even some of the justices themselves.

Justice Clarence Thomas and other conservatives have made clear they believe lower courts have been thumbing their noses at the Heller decision by upholding restrictions. "The Second Amendment is a disfavored right in this court," Thomas has said.

At oral arguments Wednesday, Thomas was holding up a US atlas, that he presumably was using to stress how broad the law was in that it covered even the most sparsely populated areas of the state.

The new case, New York State Rifle & Pistol Association v. Bruen, concerns a New York law governing licenses to carry concealed handguns in public for self-defense. It requires a resident to obtain a license to carry a concealed pistol or revolver and demonstrate that "proper cause" exists for the permit. Residents must show that they have a great need for the license and that they face a "special or unique danger to their life."

A panel of judges on the 2nd US Circuit Court of Appeals held that New York's law does not violate the Second Amendment. Only five other states -- California, Hawaii, Maryland, Massachusetts and New Jersey -- have similar regulations, but those states are comprised of some of the most densely populated cities in the country.

"These states contain about a quarter of the US population, so one in four Americans would likely experience significant increase in the number of people carrying guns in public places if the court were to strike down New York's law," said Adam Skaggs, chief counsel of Giffords Law Center.

Twenty-one states generally allow people to carry concealed weapons in most public spaces without any permit, background check or safety training, according to the group.

New York Solicitor General Barbara Underwood told the court that the law was "in the interest" of public safety.

She did not dispute that fact that individuals have a right to carry arms outside the home, but she told the justices that the right did not extend to anywhere a confrontation may arise.

The law requires applicants who want to carry a handgun in public without restriction to show an "actual and articulable" self-defense need, as opposed to one that is "speculative or specious." Underwood warned the justices that if they rule against the law they could jeopardize other laws that restrict handguns where people often congregate like courthouses, airports, subways, bars, houses of worship and schools.

The Biden administration supports New York and told the court in a brief that while the Second Amendment protects an individual's right to keep and bear arms, the right is "not absolute."

Acting Solicitor General Brian Fletcher told the justices that the law was " firmly grounded" in the nation's history.

The petitioners in the case are Robert Nash, Brandon Koch and the New York State Rifle and Pistol Association. They were represented by Paul Clement, a George W. Bush-era solicitor general who argued that that the Second Amendment ensures a right not just to "keep arms," but to bear them.

Both Nash and Koch have passed all the required background checks and have obtained licenses to carry guns for hunting and target practice, but they have not been able to establish a special need for self-defense that is required under the law in order to receive an unrestricted license.

Clement argued that the law makes it almost impossible for an ordinary individual to obtain a license because the "proper cause" standard is so demanding and left to the "broad discretion" of the licensing officer.

"Good, even impeccable, moral character plus a simple desire to exercise a fundamental right is," Clement said, "not sufficient." "Nor is living or being employed in a high crime area."

Nash, for instance, requested to carry a handgun for self-defense after a string of robberies in his neighborhood. But he was denied because he did not demonstrate a special need for self-defense. Koch wanted a similar license, and he was able to cite his experience of participating in safety training courses. He too was denied.

The justices also spent some time during oral arguments considering whether they should revisit the framework that lower courts have been using to measure how gun regulations should be evaluated.

For the most part in recent years, lower courts have used a balancing test taking into consideration a government's interest in passing the law at issue. Barrett and Kavanaugh, when they sat on the lower courts, said judges should focus instead on the text, history and tradition -- the intent of the founders -- in weighing firearm restrictions. On Wednesday other justices, most notably Thomas and Gorsuch, seemed to endorse that thinking.

Critics say that such an approach would lead to courts striking down more restrictions. The justices also seemed to already be considering a next case and a restriction that might cover a more sensitive place, instead of one that is just a heavily frequented areas. They discussed stadiums and subways and university campuses. At one point, Justice Stephen Breyer pointed out that people of "good moral character" who were drinking a lot could get angry and people could end up dead.

Clement has drawn the support of Texas Sen. Ted Cruz and 24 of his fellow Republicans. Their amicus briefs argues that the New York law allows "only a select few members of the public to bear arms" and that the law "turns the Second Amendment on its head."

The senators acknowledge that firearms policy can be complex, but that the right to bear arms "cannot be second-guessed by legislators across the country who simply disagree with the choice the Framers made."

But some prominent conservatives including Judge J. Michael Luttig, who served on the 4th US Circuit Court of Appeals, filed a brief in support of the law, emphasizing its roots in the nation's history. "Text, history, and tradition," he wrote, "show that a constitutional right to bear arms outside the home, in public and in public places, has never been unrestricted and indeed, has historically been restricted in many public places."

This story has been updated following oral arguments.